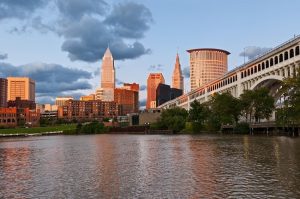 Today we continue the ESI Scale Interview series where people answer questions about their success at working the ESI Scale.

In short, the series focuses on what the interviewee is doing in the areas of earning, saving, and investing. They also get an opportunity to ask ESI Money readers for suggestions if they choose to do so.

With that said, let’s get started.

Please tell us a bit about yourself.

Here’s the thing: most of the stories on this site are by people who started early and didn’t make huge mistakes along the way (“I began saving the day I was born, when I sold my pacifier to the kid in the next crib and invested the proceeds in index funds”).

I want to tell a different story – that you can make pretty much every mistake in the book, yet still get on track. Besides, life’s more interesting when you have some scars.

I’m 48, and my wife is 39. We’ve been married for five years. I have two teenage children from a previous marriage.

We are in the greater Cleveland area, which is a wonderful place to live – we have all of the advantages of a big city (world-class museums, pro sports, vibrant restaurant scene, great park systems) with a much more affordable cost of living. The cost of a starter home in Silicon Valley or D.C. will get you a castle with a moat here.

We also own two cars (worth maybe $18-20K total), but I don’t like to include declining assets in our net worth.

It’s been a combination of making a good income, investing some of that income, and using some more of that income to pay down our mortgage aggressively.

More generally, it’s been a matter of learning from mistakes and trying not to repeat them.

I was divorced in my late 30s. I sat down to do my finances not long after the split, and realized that after 15 years of my working life, I had a negative net worth to show for it. I had improved my finances somewhat by the time my wife and I started dating, a few years later. But both of us were still just sort of bumbling along.

The turning point came after we were engaged. We were discussing finances, and she brought up the name Dave Ramsey. I’d never heard of the guy. I read his books, and they made a lot of sense to me. Not because he was saying anything groundbreaking – he wasn’t (and would be the first to say that) – but he put it all together in a way that it clicked with me.

We decided to start following his plan. Fortunately, we did have some money saved, and not too much non-mortgage debt, so we had a good head start. But the main thing was that we started budgeting (really for the first time in either of our lives), and started living well below our means.

Tell us a bit about your career.

I’m a software development manager, and my wife is in the process of moving to a consulting position (she’s just finishing her current role with a large nonprofit).

Do you have a side hustle?

I do not. I enjoy writing, and have toyed with blogging, but found that I’m not interested in developing and maintaining a site. (Ideally, I’d write for some other site!) My wife teaches yoga a few times a week, bringing in an extra $400 or so a month.

We make good money, and we’re very appreciative of the many opportunities we’ve had. I’m downgrading myself because I was stagnant in my career for many years, and settled for less than I probably could have made elsewhere, in the name of “stability.”

I moved to my current company three years ago, and have had much more opportunity (and corresponding salary growth) there.

Life lesson: Don’t stay in a job or career where you are stuck, simply because it is safe or comfortable. Comfort is seriously over-rated.

What are your future plans regarding growing your income?

Keep doing what we’ve been doing the past few years, because it is working.

I should be in line for a significant raise early next year, and have potential promotions in my future; and as mentioned, my wife has a really strong opportunity in front of her.

What percent of your gross income do you save?

It’s heresy to say this on a personal finance site, but I’m not sure. I’ve never thought in terms of savings rate. If I stop and think about it … between our retirement contributions and pre-paying our mortgage, we’re around 40% the past couple of years.

How did you get to this level?

The turning point was when we started budgeting in earnest and really asking ourselves “is that how we truly want to use our money?” on every purchase.

We started putting 15% of our income in retirement funds, and also started living well below our means. We’ve done that without being extreme – it’s not like we split two-ply toilet paper or rinse dental floss for future use.

And we’ve also had a fair amount of life along the way (my wife had a brief period of unemployment; I was sick and missed three months of work; we’ve had some significant medical expenses; and so on).

Not because we have the highest savings rate – there are certainly people who put our rate to shame – but because we’ve found a level that strikes the balance we want between living life today and preparing for tomorrow.

We think we are well-positioned for tomorrow, while still living complete lives today.

What are your future plans regarding saving your money?

We’ll always live well below our means, I suspect.

Even when we get to that point where we have more money than we could ever spend, it would be too big of a shock to our system to actually spend everything we bring in.

What are your main investments?

We own low-cost index funds. We’re fortunate that both of our retirement plans offer such funds, instead of a buffet of high-fee crap.

With my wife moving to self-employment, we will be starting a SEP-IRA for her, which should really allow us to boost those contributions.

I’ve made plenty of mistakes along the way, but I like where we are now. In the future, I would like to branch out into real estate, in order to develop a reliable stream of income.

What are your future plans regarding investing?

What money mistakes have you made that others can learn from?

Shit, how much time you got?

The weird thing is, I “knew” a lot of good personal finance principles from an early age. I’ve never been a big spender. I saved in retirement funds, and invested in equities. I generally lived within my means.

But when push came to shove, I made a lot of bad decisions. Decisions that maybe made sense in the moment, but that I now realize were ten different kinds of stupid. Let’s list some of them, shall we?

I could go on. You get the idea.

So that’s the inspiration to take from this interview. You can do an awful lot of stupid things, and still end up on the right track.

We may not be able to retire at 50 (wouldn’t want to anyway; my job these days is too much fun), but we’re definitely on track to be financially independent for life.

Are there any questions you have for ESI Money readers regarding any parts of your finances?

With my wife moving to consulting, this is the first time either of us has been a 1099 contractor rather than a W-2 employee. Any advice is appreciated.

Beyond that … no specific questions, but I’m always interested in how other people see our situation, moves they might make that we haven’t considered, and so forth. So if you have any thoughts, let’s hear them!