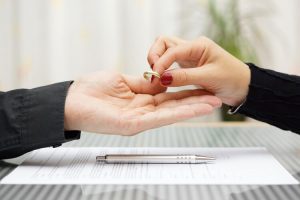 In The Ten Worst Money Mistakes Anyone Can Make I listed the following as #7:

As I noted, this can be a double-edged sword. I stated:

There are actually two major financial mistakes related to marriage: marrying a spendthrift and getting divorced.

The other day I was taking a walk with my daughter and the subject of divorce came up. Specifically we were talking about an article we had seen where a guy had been divorced five times. Yes, five.

I’m not going to get into the emotional side of divorce in this article as our conversation didn’t really go there.

Instead we talked about how dividing your assets in half every few years can leave you pretty darn poor, even if you start out with a bunch of money.

As we were talking, I used the following example with my daughter:

So after five divorces you move from doing pretty well ($2 million) to barely having any savings at all ($62.5k).

Heaven forbid that you married a spendthrift or two out of those five or you’d probably have a lot less than $62.5k left!!!

The Moral of the Story

In the end, who you marry is a HUGE financial decision!

Of course we don’t marry just for money (or even mostly for money) — at least most people don’t — but being financially compatible and being a person you can commit to the rest of your life are two key points any of us need to keep in mind when we get married.