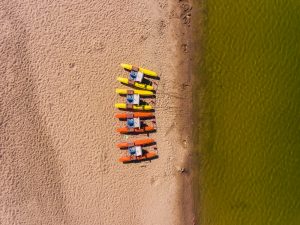 As I detailed last week, we took a trip to Grand Cayman in January.

Over the course of a few posts (which I’ll spread out a bit) I’m going to detail what we did, give some tips for making the best of a trip to the island, and throw in a few pictures for fun.

I’ll list the events by day and put in tips where they seem appropriate.

Before I get into specifics, let me share a few things about how we like to vacation…

We don’t go for the least costly options. Sorry if you were looking for suggestions to see Grand Cayman on less than $200 — you won’t find them here. Just the fact that we are going to Grand Cayman (versus Mexico, the Dominican Republic, Jamaica, etc.) should tell you we’re not trying to save a ton of money. We like to travel on convenient flights, stay in nice places, and enjoy ourselves without having to squeeze nickels.

Of course, if there are less expensive options that we like or if we can do something acceptable and save money, we will. We’re not looking to spend for spending sakes. But overall I hate to scrimp and save on vacation, so we don’t do that.

Funny story: As we were getting ready to leave on this trip I said something like the following to my wife, “The second we step out that door, we are on vacation, and I don’t want to hear a peep like ‘this costs too much’, ‘that’s too expensive’, and so forth.” (She’s a bit more “frugal” than I am.) She said “ok” and we were all in agreement. The trip was peaceful for all.

Now let’s talk about what to do on vacation.

There are many types of vacations. Some people like to go, go, go while others like to sit back, read a book, and relax. We are in between these two — we like activities but also want to relax. You’ll see this reflected in what we did in Grand Cayman.

A big part of this trip was simply being with my parents. They hadn’t come to our house for Christmas like they normally do since we were going to see them soon after, so we hadn’t seen them in a while. Simply being together in a nice climate was a treat for us all.

Now that I’ve set the stage, here we go…

We finished packing this morning. We all had a carry-on suitcase and a personal item (backpack). Since we had a washer and dryer at the condo where we were staying and since our clothes were thin due to going to a warm climate, it was easy to travel light.

We packed enough for five days, then planned to do laundry once to keep us in clothes the rest of the trip. This not only made it easier to travel through the airport (and eliminated checking and claiming bags) but also saved us baggage fees.

For the record, here’s what we took:

In addition to packing we did all the “get the house ready chores”. These included:

With all that completed we left the house at 3 pm.

Our flight was out of Denver and at 6 am on Sunday. We decided to get a hotel close to the airport on Saturday instead of getting up at 3 am Sunday and driving there.

Not only that, but you never know what Colorado weather will be like in January. We felt going up a day early would be wise in case we had a winter storm (which we didn’t, but the early-factor was still worth it). Plus, since the weather can turn on a dime here, we didn’t know it was ok until the day we were set to leave.

We stayed at the Hilton Garden Inn because it:

We arrived around 4 pm, went to dinner at Ted’s Montana Grill next door (which was pricey BTW ($90) but we were on vacation!), and back in the room by 6 pm or so.

We went to bed at 9 pm knowing that even staying at the hotel it would be an early morning wake-up the next day. 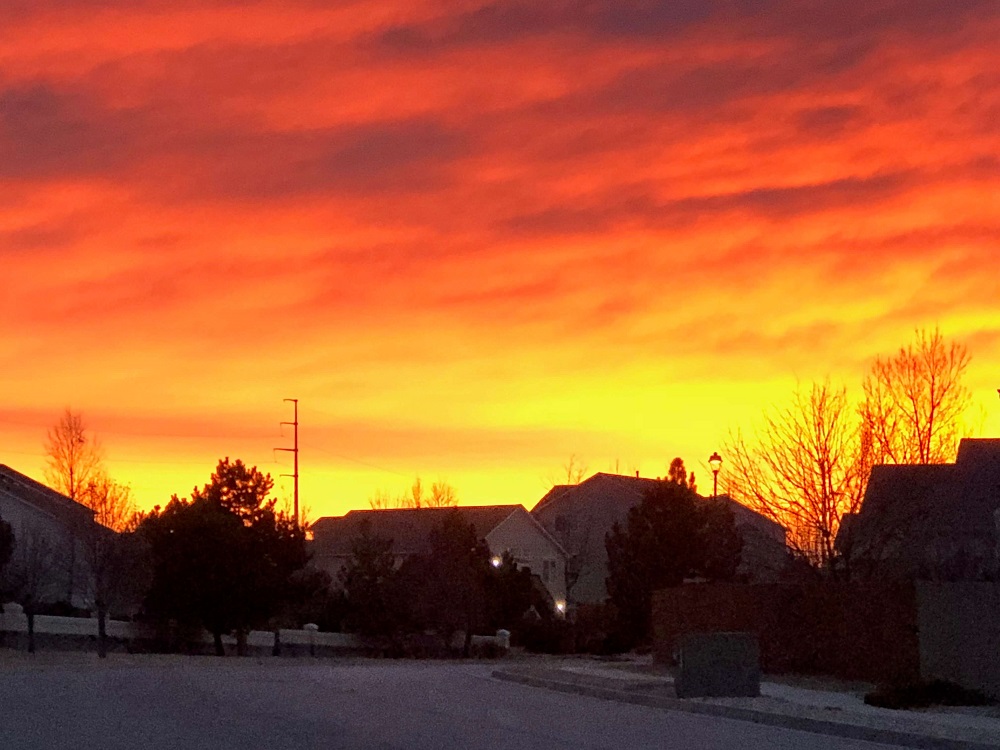 This is a sunrise photo I took walking to the gym on Saturday before we left.

Tip: Set a backup clock when missing an appointment would be really, really bad. Ha!

We dressed quickly and were in the lobby for a 4:20 am pick-up, a particularly appropriate time for a Colorado shuttle. 😉

BTW, the shuttles only ran at 20 and 50 minutes after the hour, and we felt 4:50 am was too late (though 4:20 am was too early). But our motto is “better to be early”. I’ve had experiences standing in the Denver security line for 1.5 hours and barely making a flight.

Of course, once you plan for the worst, the best happens. We got to the airport in 15 minutes, breezed through security (we had TSA pre-check), and were at the gate by 5 am for a 6 am flight. The only hiccup was a brief security issue my daughter had.

Tip: Do not try and take cake frosting in a carry-on item. It’s a liquid that’s over the ounces limit and TSA will confiscate it.

Needless to say, my daughter lost the frosting she was taking (she got it for Christmas as part of a gift and wanted to eat it on cookies while on vacation).

We flew American since it offered the best times and was basically the same price as the other options (around $500 each).

We were on-time to Dallas and then left there for Grand Cayman at 11 am.

On the Dallas to Grand Cayman flight I experienced something that I haven’t seen for a couple years — empty seats on a plane. There were so many empty seats in fact that both my daughter and I had three seats to ourselves. My wife and son shared three seats, though they could have moved and had three to themselves as well. This made for a very comfortable flight and a great way to start the trip.

Tip: When booking a long flight, consider the length of each segment to make sure none is too long. We took Denver to Dallas and Dallas to Grand Cayman to the island and neither flight seemed long. On the way back we had Grand Cayman to Miami (a very short flight) and then Miami to Denver (which was 4.5 hours and was brutal). It seemed like the trip back home was twice as long!

We arrived at 3:20 pm to a wet Grand Cayman. It had rained (there were still a few sprinkles) and rain was actually in the forecast for the entire time we were to be there. Thankfully, the forecast turned out to be incorrect.

We made it through customs fairly quickly (maybe 15 minutes). You don’t need a visa to visit Grand Cayman as a US citizen, but you do need your passport (of course). We quickly found my mom and dad since the airport is not that big. They had arrived 30 minutes before we did (they flew in from Des Moines).

BTW, we decided not to rent a car because of:

You’ll see later in this series that the bus system was cheap and awesome.

Our Home in Grand Cayman

I described our condo in the last post, but let me add some detail.

We stayed at the Windsong Villas. Specifically we were in unit 2. You can look through the pictures there if you’re interested in what it looked like (the pictures are accurate — it was very nice).

My wife and I stayed in the master bedroom, my parents were in the other large bedroom, and the kids shared the room with two twin beds.

As a reminder, the cost (all in) for the unit was $5,438 for 9 nights. This might seem a bit pricey, but it wasn’t compared to the other options. In addition, this place was AWESOME. A few reasons why:

I’ll cover more ways this place was awesome as this series goes on, but let me say I would stay there again in a heartbeat and I can’t imagine a better place on the island to stay.

We did our research but you never know what it’s like until you get there. We really lucked out on this one. 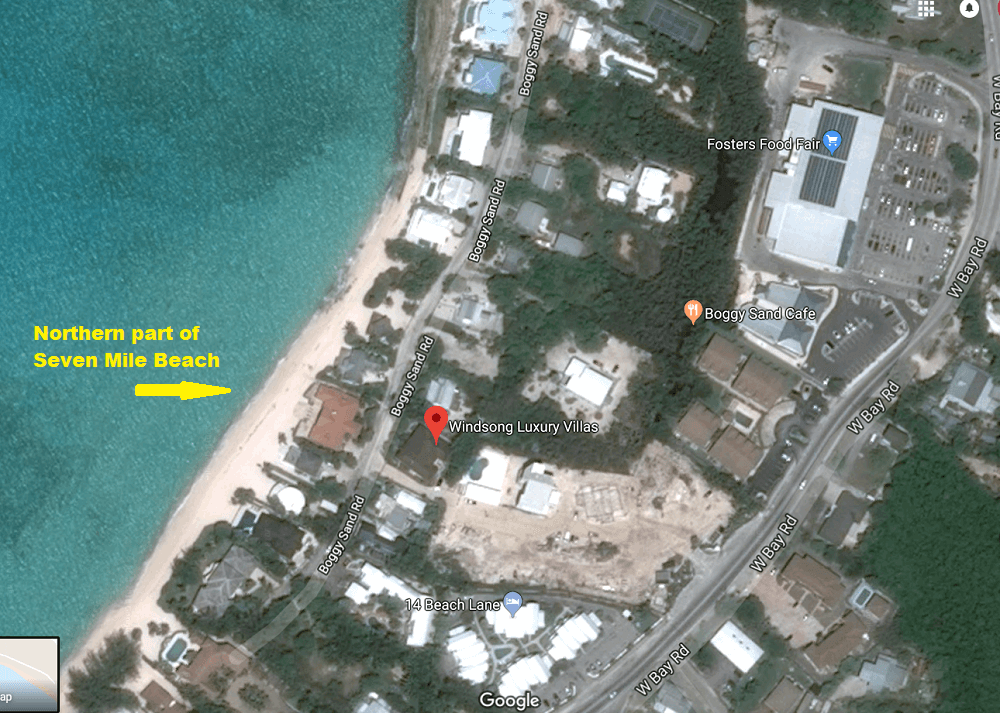 Here’s a Google image of our condo (red flag), the beach, Foster’s Food Fair (our grocery store close by — blue flag), and the cafe where we ate our first night (orange flag).

We unloaded our stuff, met with the house manager who popped over for a bit and answered all our questions (where was such and such, how did this or that work, etc.), then went out to the Boggy Sand Cafe for dinner. We actually sat at the tables where the waiter is standing on their homepage photo. This restaurant was near the grocery store, a 5-minute walk from our condo.

Tip: In most Grand Cayman restaurants, they include the tip automatically on your bill. So check the receipt or you might end up tipping twice.

Tip: Pay your expenses with a credit card that has no foreign transaction fees. Things are going to be expensive enough on vacation, no need to make them 3% pricier. We called our card company in advance to make sure which cards had no fees.

After dinner we walked home, unpacked a bit, visited and got settled in, then went to bed.

That’s it for this time. For the next post in this series, check out part two where we ease into island life. 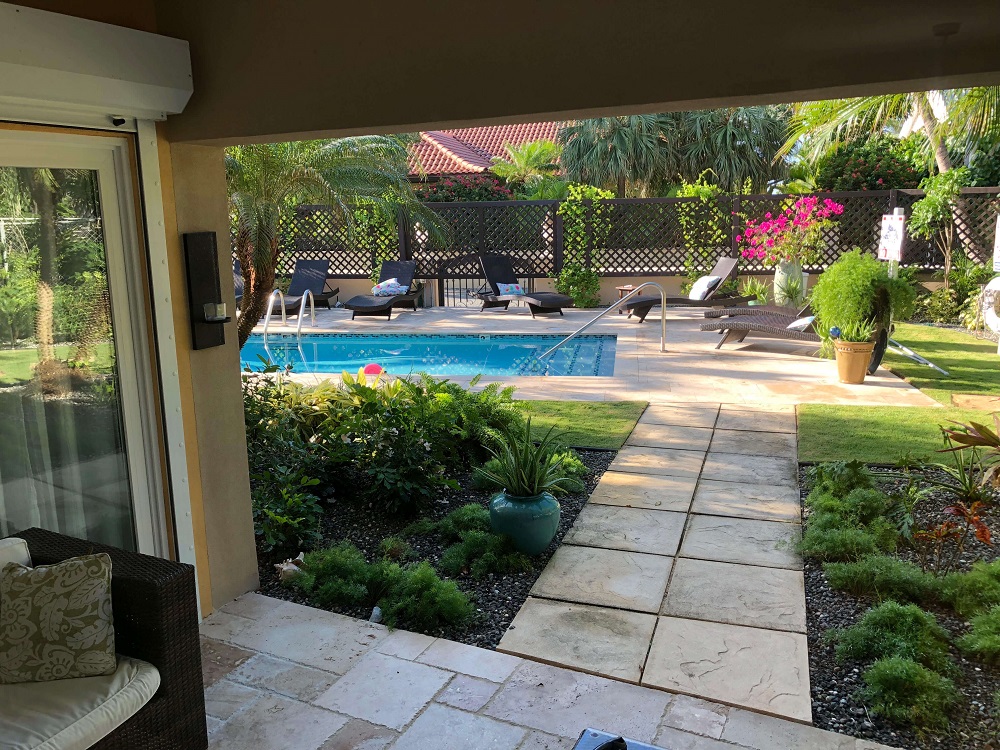 Here’s a picture from our living room out the sliding glass door to our patio and pool.