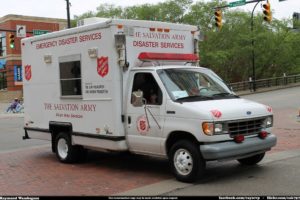 We spend most of the time here at ESI Money talking about how to grow our net worths — the steps we can take steps to become wealthier.

Today I’m going to shift gears a bit and cover a topic that often gets left out of financial blogs, but needs to be discussed.

As you might tell from the headline, I’m talking about giving. It’s a topic that is especially appropriate at this time of year.

What Sort of Giving?

There are several ways people can give. You can give money, time, expertise, and so forth.

In this post I’ll specifically be talking about giving money. This could be to charitable organizations, educational institutions, or even directly to people. But it’s writing a check, charging a card, or giving cash to some group or person in hopes of helping them in some way.

The first question that comes up whenever I talk about giving is “Why should I give?”

That question especially makes sense on a site that’s about growing your wealth! Simple math tells you that if you’re giving away money, you’re becoming LESS wealthy. What’s up with that?

There are many reasons to give (perhaps some will leave those I miss in the comments below) but here are the reasons that resonate most with me:

And while this isn’t a reason to give, I do want to note that if you follow the advice on this blog you should have more than enough to grow your net worth AND give at the same time. They are not mutually exclusive.

The Benefits of Giving

I used to think that giving was a benefit in and of itself — that by donating to causes, you felt good about it and that’s what you got out of giving. That’s certainly part of the equation, but as I searched a bit deeper I found that’s just the tip of the iceberg.

Turns out there are many desirable non-financial benefits of giving. Here’s an initial list from the Art of Manliness:

1. We’re actually happier when we give money away.
2. When we give, we participate in what we deem is important.
3. Giving releases us from the power of money.

You just never know. Maybe the twenty bucks you give to the American Cancer Society will be the tipping point. It will be the money that breaks open the solution to curing cancer.

Just imagine all the possibilities that can happen when you give.

Nope. Here’s a piece from a pretty reliable source that even skeptics will regard as valid. The Cleveland Clinic shares Why Giving is Good for Your Health as follows:

Studies find these things. And the Cleveland Clinic agrees with them. Must be pretty solid findings.

Who doesn’t want longer life and greater happiness? I’ll take some of each, thank you.

I googled around a bit and found source after source listing the benefits of giving, but they all pretty much echo what the Cleveland Clinic summarized. The bottom line: There are real, tangible, non-financial, health and life benefits from giving.

What’s not to love?

Once someone decides to give, the next step is to consider how to give so you can make the most of your contributions. Here’s how Forbes suggests we do this:

We all admire people who live the credo “It’s better to give than receive,” but it might be even better to give and receive–especially when you can afford it and get the biggest tax benefit. By planning and budgeting your charitable donations just as you do your discretionary spending and saving, you can ultimately be more generous over your lifetime (and after). So consider replacing a hit-and-miss donation approach with charitable-giving tactics and strategies that could improve your financial planning.

More specifically, here’s what I would recommend for making the most of your giving:

Before I get to how my family handles giving, I want to address a point of view that I see floating around the web now and then. It can be summarized in this comment:

“My taxes count as my giving because they go to feeding the poor, housing the homeless, etc.”

I can’t tell you how much I disagree with this statement. Here are some reasons why:

We have given away at least 10% of our gross income since we got married. Most years it’s been more — to the point where we’re probably closer to 20% average through the years.

Here’s how we give:

So those are my thoughts on giving. Obviously, I do not benefit in any way if you decide to give. I have no vested interest in you giving other than I think it will be good for you. So please consider giving to the charity of your choice this season.

Also, I’d love to hear your thoughts, practices, and stories on giving in the comments below.