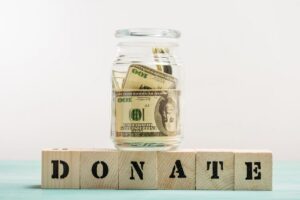 This is part two of my quest to spend more in retirement to be happy.

In case you missed it, part one was Our Search for Happy Retirement Spending. You should read that post before this one as it sets the stage for what happens here.

As a reminder, I ended the last post with the following:

Now remember, these two, seemingly different, things were happening at the same time…I was trying to figure out how to spend more to be happier as well as think of how to change my giving to have a bigger impact. It was sort of surreal combining those two as they seem to be on opposite ends of the money spectrum, but that’s where I was.

Now let’s continue the story from there…

Sorting Through the Information

As I was sorting through these issues mentally and specifically the spending portion, it dawned on me the inherent bias in the thought “spend more to make myself happier.”

This line of thinking was saying (at least in part) that “spending” = “happiness.” And no one seemed to be questioning it. But was it true? Does spending more always equal happiness?

I believe we all know that it does not. In fact, many Americans try to spend to make themselves happier, going into debt or buying junk, simply to find out they are no better off than they were and might even be less happy than before the spending.

I was beginning to reject, at least somewhat, the concept that I needed to spend to enjoy life more/be happier.

But where would that leave me? What options did I have if it wasn’t to spend what I had accumulated?

I guess I could simply let it ride, as I’ve done for most of my retirement, but not taking action/having a plan isn’t really my style. So I kept pressing on.

That’s when two other books entered my world and started to bring things into focus.

The first book that made an impact on me was The Wealthy Gardener. I highly recommend this book and if you haven’t yet read it, do yourself a favor and get a copy.

I read it at a time when I would workout each morning, then go to my gym’s cafe and eat a breakfast sandwich, drink a coffee, and read a book. It was a very relaxing time that I enjoyed a lot. It was “fun” to sit there and enjoy the book (it’s written in short, easy-to-read chapters that can be covered in 10 minutes or so) while others were zooming past on their way to work. Hahahaha.

FYI, I did this for a few months until they increased the price and cut the quality of the food, so I moved to eating at home. And they opened pickleball courts so I went from working out straight to pickleball most days — breakfast has to wait when pickleball calls. 😉

Anyway, the Wealthy Gardener introduced the concept of the Five Year Crusade. The summary:

A crusade is a vigorous, life-changing movement to advance a cause. And five years is short enough to be manageable but long enough to transform every unwanted condition of our lives.

I found that wanting fast results led only to despair. But a steady effort over five years transforms all of life.

Basically a Five Year Crusade is a goal you feel passionate about set to a series of steps/to-dos to get you to that goal in five years or less. It works for any area of your life: relationships, finances, physical fitness, and on and on.

A few months after reading the book we had its author, John Soforic, do an Ask Me Anything session for the Millionaire Money Mentors (MMM).

I asked him about the Five Year Crusade (I wanted specific steps for creating one). Turns out he’s writing a book on the topic (which he has now changed to a Three Year Crusade). Here’s his response to my question:

In terms of when, my plan is for the summer of 2022. I wrote it once, and threw the book away and started over.

In terms of a 3-year crusade, I copied and pasted the following from the book description on Amazon (it’s there for pre-order, but only as a Kindle version as of yet).

This book aims to convince you that these essentials are the intentional lifestyle of a 3-year crusade, and that it’s easy to do them all if you use an empowering tracking system. The author also argues that the price of success (goal-achieving behaviors and simple habits) is easier than the struggles of a mediocre life. Your impact can be a weekly game.

I’m excited to read it once it comes out. As of this writing (June 2022), it’s still not yet published, so time will tell when it’s available.

That said, I LOVED the concept of a big, long-term goal with high impact. It’s something I want to incorporate into several areas of my life.

The second book I read was Happy Money, a book that I’ve been covering recently here on ESI Money.

In particular, one of the book’s five principles for “spending” money to increase happiness was actually to “give” money away.

Here’s a summary of its thoughts:

New research demonstrates that spending money on others provides a bigger happiness boost than spending money on yourself. And this principle holds in an extraordinary range of circumstances, from a Canadian college student purchasing a scarf for her mother to a Ugandan woman buying lifesaving malaria medication for a friend.

The benefits of giving emerge among children before the age of two, and are detectable even in samples of saliva. Investing in others can make individuals feel healthier and wealthier.

I shared much more in Be Happier by Investing in Others in case you are interested.

So all of this was swirling around in my head — spending to be happier, The Life You Can Save, the Five Year Crusade, and being happier by investing in others.

Then, the light bulb went off. I could be happier in my “spending” by giving it away (or at least some of it). And to make sure I did a great job of giving, I would create a five year plan for giving that had getting a good return on my giving as a major focus.

I talked to my wife about this and she was completely on-board with it. In fact, if it was up to her we’d probably give it all away and live in a tent somewhere. Hahaha.

We discussed the concept of “giving to the most impactful cause without care for connection” — something advocated by The Life You Can Save, Givewell, and several people in the MMM forums.

But as we thought about this, it left us hollow and without joy. We wanted to give to causes and organizations we believed in. Specifically we wanted to focus on helping the poor around the world.

So we decided to give to the most effective organizations working on the causes we had a connection with.

After a lot of thinking, a ton of discussion, and many back and forths, here’s what my wife and I agreed to do:

How We Went About Year 1

Given that 2022 would be year 1 of the five years, we needed to get going (as we decided much of this in March/April).

We started with what we wanted to accomplish, which in general terms can be narrowed down to “helping the poor.”

This is a broad category, but could be something dealing with food, clothing, water, education, etc. — anything.

Next we identified four organizations that met this criteria in one way or another. I sent them the following message (either from their website or directly if I had a contact name):

Hello! I hope this message finds you doing well.

We are looking to distribute about $100k per year through our donor advised fund. We are interviewing potential charities for both philosophical match and cost-effective impact. As such, we are interested in finding out more about your various programs, their impact, and how we might be able to help with them.

Can you please let us know the best way to go about doing this?

Of those four, three contacted us fairly quickly. I went back and forth with them via email trying to identify their cost per impact metrics. You would think this would be something easy for an organization to know/find/share, but it is far from that. It took a lot of messaging just to get anything meaningful and even then there were often data holes that had to be filled.

Two of the organizations were good enough at showing a decent return on giving that we invited them to come to our home and share details with us, which they did. We ended up giving to both of those two, however one of them was a simple $10k cash gift that also got us a 25% enterprise zone state tax credit.

One of the options just couldn’t come up with metrics that 1) we liked (what they measured was something we weren’t interested in) and 2) represented a good investment for our dollars. So we passed on that one even though they later invited me on a fishing trip to Alaska for “high value donors.” Hahahaha. I told them, “I’d love to see Alaska, but fishing is a certain no.” LOL.

I also told them, “I don’t need a fancy trip…I just need a good cost per impact number.” Unfortunately they weren’t able to provide one, so we passed on the opportunity.

One of the four, believe it or not, failed to contact me at all other than an automated email I received almost immediately after filling out their contact form. It said, “Someone will be in touch with you shortly.”

We then started looking for one more charity to support, found one through a connection in the MMM forums, and ended up giving to it.

So where does this leave us?

We are still spending, of course. $100k+ per year with no mortgage isn’t like we’re living in the poor house. So don’t have a pity party for us, we’re doing fine. We’ve even identified a few future spending options including:

Now, what happens after five years? Not sure yet. We’ll see when we get there. 😉

As I said, I am looking to create a Five Year Plan (or maybe Three Year Plan) in other areas of my life once the new book comes out.

Anyway, that’s my long journey to an IGE lifestyle. FYI, this means we may have hit peak net worth as we might begin spending/giving faster than our assets grow.

That is completely fine with us. 😉