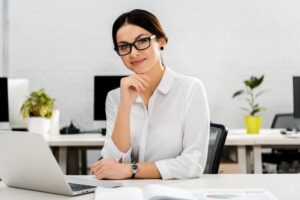 If you’re a money blogger, you get a lot of email.

People want to post this article or that article on your site. It will be “free” of course and will likely be “high quality”, “SEO friendly”, and “completely unique.”

All they ask in return is a dofollow link to their site. You know, their gambling site, their payday loan site, or their other completely worthless site.

They do this because they are trying to game Google by creating a ton of links for specific keywords, something Google does not appreciate.

Many of these requests are poorly written and have bad grammar, misspellings, and the like. Others have the wrong name (apparently I’m on some list as “Rebecca”) which make them even worse. Why anyone would post an article by one of these “authors” is beyond me.

If you have a popular blog, you get TONS of requests. Since I’ve already addressed these sorts of posts on my contact page, anyone who asks for a post automatically gets listed as “spam” on my email list. It serves them right for not reading and I hope they get blacklisted.

Similar to free articles are media requests. I get a host of emails every day pitching me on the latest and greatest book, website, financial app, and on and on.

But every once in awhile I find a gem — something that does work for the readers, this site, and me. Or at least it seems that way.

Today we have a story of a connection almost made — one that spurred some thoughts from me (below) that have the potential to dramatically increase your income.

Back in the day when I was working (you know, when horses were the main mode of transportation and we did our late night work by kerosene), no one talked about salaries. And when I say “no one”, I mean the rank and file workers. We didn’t share this sort of information with each other.

To talk about it was deemed to be impolite, which companies readily endorsed. After all, the companies had all the salary information, so they knew who made how much, but they didn’t want the workers to know what each other made lest some find out they were being paid way too little.

So when I got an email pitching me on a new site designed to get employees to share salary information for mutual benefit, I was curious.

But I also wanted results, not just some sort of “we’re so great” pitch. So I asked if they had success stories to share. It turns out they did! And that’s what I wanted to post for you.

Once I had received their stories and spent several hours working on getting them in shape (along with my thoughts) for a blog post, I set everything up to be posted on this site.

I also sent the article off to the company for review. I don’t give companies the right to influence content, but it was simply an FYI so they would know what was coming.

They liked the post but…had a change. Apparently the stories they’d secured had not been 100% approved, so they needed a couple edits surrounding one person’s identity.

Now let me say, I HATE re-work — doing the same thing over again simply because it wasn’t done right the first time.

But the changes were small enough, so I made them while also letting the company know I was not happy spending time on something they should have gotten right initially.

Then all was well for a week or so when they emailed me with a new set of changes. I thought about pulling the piece (or at least editing it so their stuff was out) at this point since I didn’t want to be part of what seemed to becoming a “crazy show”. But I tried to be generous, made the changes, and told them that was it. No more edits from here on out.

I think you can guess what happened next. A week or so later I received a new set of requested changes.

I learned long ago that when you’re dealing with a person, company, etc. who is out of control, your best option is to simply remove yourself from the situation. It’s highly likely that the changes/craziness would continue on their end because that’s who they are. So if you don’t want your life to be crazy too, you need to cut ties with them.

And that’s what I did. I removed all content relating to and provided by them from this post.

So I don’t have any great stories of how people networked to share salaries and then used that information to ask for raises, but let’s just pretend we do. Because my thoughts below are still worthwhile and are based on what can be done if employees share salary information.

The Way It Is

Many of you know that I served as the president of a $100 million company during my career. On my way to that position, I was in corporate leadership (VP level or higher) for 20 years. I say this to let you know that I spent decades managing salaries for various companies (in addition to managing my own with each company).

Here are a few facts I can tell you about how the corporate world works:

1. Companies want to pay you as little as possible.

This is because companies want their expenses to be as low as possible and paying employees is one of their biggest expenses. So the lower we could keep salaries, the better.

2. There are pay discrepancies and they will not be corrected on their own.

Many times I had mangers under me making different salaries. This was generally because the managers were hired from different backgrounds, and most employees simply want an increase from what they’re paid now (and employers use past pay to set new pay as well). So in the end I might have Steve making $50k, Jim making $40k, Sherry making $45k, and Pete making $60k, all doing the same job.

That said, they may not be doing the same job equally well. In fact, it could be that Jim, who’s paid the lowest amount, was the best performer in the group. But because Jim was from another department that paid poorly, the company could get him for $40k per year. And since the company wanted to keep salaries as low as possible, they weren’t going to offer Jim a penny more.

Because of all these dynamics, things stayed the same with some earning more and some less.

Those that perform get paid. It’s that simple.

Let’s say Jim got wind of the fact that Sherry was making $45k and came into my office asking for more money. If Jim really was my best performer and I needed him, I’d find the extra money to keep him happy. Oh, I might delay a bit to save myself what I could, but eventually I would pay him $45k or somewhere close.

BTW, let’s not confuse what I would have liked to pay all these people with what I could pay them. I would have LOVED to pay them all $60k or more! But I could not do it based on the financial parameters the company gave me.

Many times I “found” extra money by offering to pay employees a bonus for extra business. After all, if we made more, we had more to spend. But most employees are loath to commit to delivering extra sales/profits in order to receive more pay. They want it guaranteed whether the company succeeds or not.

Part of this is understandable as employees might do everything right and still not get extra pay because the company does something stupid. I know I missed out on several bonuses because a person or another department did something that killed my results.

How It Could Be

Those are the facts of how the world is. You can see why companies want to keep salary information a secret — if the word on real salaries gets out, they would have to pay a lot more!

Now let’s look at how it could be. Let’s take the four employees above and say they went out to lunch together.

As a reminder, here’s what each is making:

They start talking about salaries and each shares what they make. I’ll tell you that after that conversation, Pete is the only one feeling good! Ha!

But things are rarely that clean in the real world. It’s more likely that Pete is paid more because he came from company XYZ and they happened to pay more. So when he negotiated his salary he was starting from a higher point.

Even worse (and this happens a lot), Pete might be a complete Bozo and as incompetent as all get-out. But maybe he’s friends with the VP or the son-in-law of the owner. Or maybe he sucks at business but is a good networker. I’ve seen this scenario play out over and over again throughout my career.

That’s why it’s most likely that there’s little correlation between pay and performance. This is where salary transparency can really make a difference.

Let’s say Jim and Sherry are the top performers. How do they feel after the lunch conversation? They feel ripped off! They are now in the position of having information and using it to increase their pay. And if they truly are the best, they will likely get raises as the company can’t afford to lose them.

This is how it could be if everyone knew everyone else’s salaries. The information provides strong performers with ammunition to get paid more.

Now if you’re not a strong performer, it won’t help much because the company can likely replace you with a better performer for just a bit more than you make.

So What Should You Do?

This is nice information, but what steps can you take given the information above? Here are a few suggestions:

The bottom line if you’re underpaid is that you’ll probably get more if you’re a valuable employee and ask respectfully.

This is why salary transparency is so important — knowing others in your position are making more is a HUGE factor in your favor when asking for more.

Anyone out there used the knowledge of what others were making to get paid more? If so, I’d love to hear your story in the comments below.