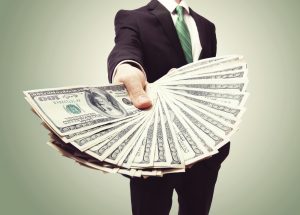 We’ve talked several times about the value of growing your career, which then allows you to earn better than average annual increases.

There are seven steps you can take to earn higher increases and when you do, you can literally earn millions of dollars more over the course of your working lifetime.

But there’s another important piece to maximizing your career earnings. This too can add up to a significant amount of money.

The opportunity: making your first job’s starting salary as high as possible.

What’s a High Starting Salary Worth?

The impact of a high starting salary can best be illustrated through an example.

Let’s look at the following individuals:

Obviously, Jill will make more over a 45-year career. But how much more?

Yep, Jill earns half a million dollars more simply by starting a bit higher than Chuck.

This is because that $5k advantage compounds upon itself over 45 years, making Jill much better off.

BTW, even earning just 3% increases, they both make over $3 million during their lifetimes, a point that shouldn’t be passed by quickly.

High Starting Salary is Worth Even More

Glassdoor covered this same issue and had the following conclusions:

A study from George Mason and Temple University found that an employee who neglects to negotiate their first-ever salary could lose out on $600,000 over the course of their career. Yes, there are other variables to consider with this figure, but it shows just how much not asking for more money can add up over time. You lose out on hundreds of thousands of dollars.

This study determined that those who negotiate on starting salaries usually end up with $5,000 more than their non-negotiating counterparts. That amount might seem like chump change at first, until you factor that into the entirety of your career, which is where that freakish extra $600,000 over the span of a 40-year career comes from.

They are assuming that average annual increase are more than 3% and thus get higher numbers. But the conclusion is the same: having a higher starting salary can earn you a boatload of extra money over the course of your career.

Getting a Higher Starting Salary

This then begs the question of how to start with the highest salary possible. A few thoughts:

In the end, the company might not budge on salary at all. If you still want to take the job, I’d suggest you ask for at least something — flexible work hours, working from home on certain days, more vacation, and so forth. If you can’t get extra salary out of them at least try to get more value.

Now let’s compare the value of starting with a higher salary to getting higher annual increases to see which is worth more.

As you’ll see, there are some interesting interactions here.

Here’s how they end up:

But why do only one of them? What happens if you start high and get good increases?

Here are the total earnings for each over 45 years:

We could go on and on, but you get the point.

The conclusion, of course, is to do both.

Do all you can to begin with a high starting salary as well as get high annual increases.

Here were the numbers I was looking at when I graduated:

My results for each would have been:

The extra two years for the MBA was kinda worth it, huh? In the end that MBA would have been worth an extra $1.5 million. Not bad for a two-year investment.

In other words, I did both: made an investment of time and money to start higher as well as worked hard to get larger-than-average annual increases.

And it paid off for me.

One mistake I did make is that I didn’t negotiate on the $40k. I simply took it. I could have made much more if I could have gotten it to $45k or even $42k.

But I was young, knew next to nothing, and was simply happy to have a job after six years of school.

Oh, and the job was with a “name brand” company, so I did get value there. Working there put me on the road to earning six figures within seven years.

Just to be clear, negotiating a higher salary is not just a good idea for your very first job, but for any new job you’re taking — either within your current company or for a new one.

At the beginning of your career, a higher salary gets you started at a higher level.

During your career, higher salaries when you change jobs contribute to those all-important annual increases that can earn you millions more.

So be sure to negotiate higher salaries whenever you switch jobs. Your income and net worth will thank you for doing so.