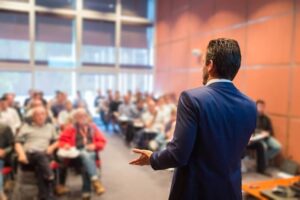 I know, I know. I’m starting to get hooked on these things! Ha!

In case you haven’t been following along, I’ve written about the first and second direct mail retirement seminars my wife and I have attended.

After the second one, I didn’t know if we’d go to another one, but turns out we did!

I’m glad we did since this was a good one for a few different reasons.

But I’m getting ahead of myself, let’s start at the beginning…

Why We Decided to Attend This Seminar

The invitation was just like any other — a flyer sent to us in the mail. It was from Accelerated Wealth.

But there were several reasons this one caught our eye and why we decided to sign up for it:

In the end, all of these factors contributed to us saying we would attend.

The Event and Setting

Here are the highlights of the event itself:

As we got seated, one presenter came over and talked to my wife. Turns out his oldest daughter is a volunteer in my wife’s Sunday school class. They chatted for a bit and I met him as well. This made the event a bit more personal for us.

And it was about to get even more personal!

As we started eating our salads, I looked up at the door and coming in were our neighbors from four doors down! We chat with them quite often as we are walking (we go by their house every day) and they are great people. I waved them over and they joined us. This made the evening extra special for us and made it feel more like a night out than simply attending a retirement seminar.

The other presenter came over (both presenters were good at working the room) and we chatted a bit. He asked what I did and I said I was retired. We then talked briefly about what my career had been (I just say “I was a marketing executive.”). He commented, “Most of the younger retirees we meet are from the military.” Ha! I bet.

We finished our salads and had a great time chatting. After about 20 minutes or so, the presentation began.

Before we get into the heart of the presentation, let me say that the following is based on my notes of what happened. Like the second seminar, they did not hand out copies of their presentation (which was unfortunate — why don’t they do this — it would make it so much easier to follow along!). While I was writing as fast as I could, I’m sure I missed some things and/or got them wrong.

In addition, much of the information below is exactly what they said (the best I could record it) but some is my commentary (to make what they said more clear for readers).

Finally, I’m writing this post the day after the event, so my memory of last night is as clear as it’s ever going to be.

Ok, with all that said, let’s get to it…

Our presenters were Dustin West (who my wife knew) and Gregg Indovina.

Both of these guys were very professional. They were polished presenters with a combination of knowledge and personality.

Dustin was introduced by their marketing director Sloane Herman. When she was telling us about Dustin, Sloane mentioned he had some Social Security education (I missed the exact name of the certification) that only two people in Colorado Springs had. Good to know as this was a topic I was interested in.

Dustin began and opened with the following:

He then moved to a graph showing what they called the “seasons of life”. They had it broken out into three stages as follows:

These are the three seasons that most people don’t know how to work within.

He then moved on to what he said were the three most important retirement questions:

He then had us fill out some true/false statements on a form from our folder.

The Presentation Moves On

Dustin then turned it over to Gregg who shared his background and then got into his presentation.

He shared four questions that people should ask themselves:

He went on to make the following points:

Put all this together and he led us to the following conclusions:

He ended with the following (which is a paraphrase that has the meaning of what he said — I couldn’t write fast enough to get the exact words):

“While you may know a bit about retirement, I know a lot. I’ve got a long history with the topic and work with people dealing with these issues every day.”

The point was — they know retirement and we don’t.

He didn’t say it in an arrogant way and I don’t think most people took it that way. But as you know, I’m a bit skeptical of this approach and did have a bit of a bah-humbug response. 😉

My wife says I’m a tough audience in this respect because I’ve been reading and writing about finances so long. That’s probably a fair assessment.

How Taxes Effect Your Wealth

Gregg turned it back over to Dustin who made the following points:

My guess is that he was pitching a Roth conversion, but he never stated it outright. I guess the punchline is saved for a personal meeting.

At this point one guy asked about paying taxes now. His point was that if you pay now, all you know for sure is that you’re out that tax money now. In theory you may save by paying less in the future, but no one knows that for sure. Congress is so whacked that who knows what they will do. It could turn out you pay taxes now AND pay more later.

Basically his point was the only known is a bad one — that you’re creating a big expense for yourself now. All the rest is speculation.

Dustin recognized his question but didn’t have a really great response to it. There really isn’t any response to it — it’s a valid thought IMO.

Dustin wrapped up the presentation by encouraging the audience to set up a personal, free, one-hour meeting. He said his promise was “we will not waste your time.”

We signed up for a personal meeting for several reasons:

So we’re meeting with them in a week! Of course I’m going to write about it, so stay tuned for that post.

With that the meat was served and we spent the next 30 minutes eating and talking to our friends.

As an ex-marketing executive, I can’t help myself but to evaluate these sorts of events from a consumer perspective.

Anyway, I would give them a B+. I think they were mostly good and the content was decent (not superior — I would have preferred something like “The Top 10 Factors to Consider Before Retiring“). They did get a ding for the questions. Also I took a bit off for them mentioning their radio show which they do NOT turn into a podcast. That’s so 10 years ago marketing IMO but perhaps they have a good reason for it.

BTW, my wife thought this was the second-best seminar we went to. She liked the first one best (which, interestingly enough, was about the non-financial issues surrounding retirement).

I would say it’s tied with the first. The content was better at the first one (more relevant and interesting), but the low-key approach by the first planner wasn’t as compelling as the performance by Dustin and Gregg.

After this event, I’m beginning to think my perception of these seminars was way off.

I envisioned them as hard-sell events led by sleazy “financial planners” (i.e. guys who were retail clerks last week) focused on annuities and whole life insurance.

None of these have been that way.

Two of the events (the first and last) were actually pretty good and worth the time we spent to go to them. The second was not great, but at least it wasn’t as bad as I had thought these would be.

That said, I have received comments from readers who have had terrible experiences (or at least hinted at them), so if you have a nightmare story to tell, please let us hear it in the comments below.

I’ll be sharing details of our meeting in an upcoming post, so prepare yourself. I’m expecting it to be verrrrrry interesting. 😉