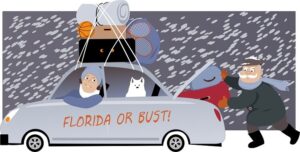 Well, we are now back in Colorado after our 2.5 months in The Villages this winter.

As I write this we have been back for 10 days or so and are mostly settled. More on that in a bit.

This post will serve as my final update and include new thoughts since last time. I’ll have one more post in this “series” evaluating The Villages by itself, so look for that coming soon if you want more.

As a reminder, I shared photos of our trip on Instagram so look there if you want updates and/or to see many of the things I’m talking about.

Here are some thoughts about the house we stayed in:

Here are some thoughts about The Villages (TV):

Here are some thoughts about the state of Florida:

Those are my high level thoughts on the main parts of our trip, but there are a few more items I want to share on our stay…

My wife and I took a two-day trip to Sarasota in March.

The first day we spent several hours at Lakewood Ranch (LR) which is a competitor to The Villages. Here’s what we did and some thoughts:

And here’s what happened on day two:

On the way back to Colorado we stopped in Destin overnight. Here’s what we did:

At one point we had thought about wintering in Destin but it’s just too cold there in the January-March time frame, so we have eliminated it for that time. We could visit in October for a family trip though.

My Dad and The Villages

After we got back from Sarasota, my dad came home and he said he was thinking of buying a place in The Villages. That was new news to us, but since he was so much more active down there and he really has nothing to go back to in Iowa (yes, his family lives there but he only sees then infrequently and spends most of his time there watching cable news television), it seemed like a great idea to us.

That said, there were issues to work through and we had less than two weeks to do so.

I emailed our realtor and asked for another house tour (which was the third of our trip). A few days later she took us through several homes and my dad and wife saw many more on their own (just driving around).

We also worked through his budget which roughly translates to the following:

I asked the Millionaire Money Mentors for thoughts and they helped me work through all these issues. They were quite helpful!!!!

With a week left, we had sorted out his finances (it could work!), many of the other issues, and he had a list of about five homes he was willing to buy in the (new) village of St. Johns.

BTW, we offered to buy a bigger/nicer home (3 BR/3 BA) and let him live in it while we visited in the winter months. That way he’d have all his money to live as large as he wanted to. But he wanted a place to his own, so we went in that direction.

Next, we entered the strange world of buying a house in The Villages. Here’s how it works:

So on the Friday before we left (one week exactly before we headed home), he tried for his first two houses. We missed them, getting third on one and fourth on the other.

Over the next several days we missed on a couple more — finishing third each time. Then nothing came up as available for a couple days.

Just as it was looking pretty bleak, on the last day before we left (a Thursday), he got his house (which had been his top choice all along!)

Since we returned home, he’s been working on moving and my wife has been helping him with details, specifics, etc. He closes on May 2.

Snowbirding and Our Future Plans

So…where does this all leave us? What did we think of our trip? Will we do it again?

There are lots of thoughts we are still working through and they change as we process them, but here is some of our current thinking:

My wife and I were on the fence and even looked at places we might rent in The Villages for next year, but we didn’t find anything we liked, so we saw that as a sign that we should try something different. We settled on taking two 10-14 day trips (one in November and one in March) to break up the winter. Maybe one trip to a Florida beach and one to Hawaii — something like that.

Then a couple things happened:

Finally, we get asked if we would ever buy a place there.

To hear the answer to that, you’ll have to read my upcoming post on The Villages. 😉