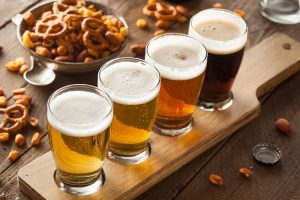 The following is a guest post from my good friend Physician on Fire.

I’m not a drinker (since a bit after college) so there’s no way I could write a post like this.

But he’s the PERFECT candidate for it — a beer connoisseur who writes in a very witty manner.

What could go wrong turning my site over to him? 🙂

Besides, when will I ever get the chance to put another beer photo on this site? 😉

“To alcohol! The cause of… and solution to… all of life’s problems.” – Homer Simpson

“Beer is proof that God loves us and wants us to be happy.” – anonymous

I like beer. I brew beer. I drink beer. I’ve invested in startup breweries.

The swag I hand out at FinCon? Physician on FIRE logo beer koozies. 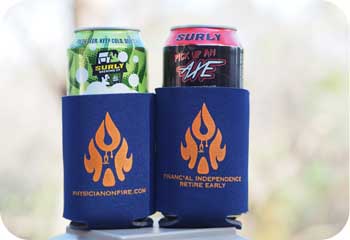 For better or worse, beer has been there on my best and worst days for the last twenty-some years.

Not every day, of course. I abstain at least as often as I partake, and I know it’s not healthy to throw back a six pack, so the plan is generally to have two, maybe three, and I’m pretty good at sticking to the plan.

But I am human — a human who enjoys beer.

My wife and I like to wind down in the hot tub with a beer after we get the kids to bed.

At most family and social events I attend, alcohol is the social lubricant of choice.

I’m no raging alcoholic, but I’d be lying if I said beer played a non-trivial role in my life to this point.

To take a month-long break from beer would not be terribly difficult, but it would be somewhat unusual.

A Sober October: The Impact of Abstinence on My Waistline and Wallet

Late this summer, knowing we’d be fresh off a lengthy vacation and returning to a busy work schedule for the remainder of the year, my wife suggested we consider having a sober October. Like a dry January, a movement that has gained steam in recent years, but two months earlier and rhyming better.

I loved the idea. That is, once I confirmed that the abstinence proposed would apply only to drinking alcohol and not to any other activities we might enjoy together.

In September, we spent a week at Disney World with a free dining plan that included an alcoholic beverage with every lunch and dinner. I’m not one to turn down free drinks.

We then cruised to Cuba and Key West. We had Mojitos on Monday with our friends from Waffles on Wednesday, another couple of humans who enjoy a good beer.

The month ended with FinCon, the conference that doesn’t sleep.

I was almost looking forward to this sober October.

Reflections on a 33-Day Dry Spell

Sunday, September 30th was a long travel day, and no beer was consumed.

I was a saint on All Saints Day, not that I had a choice (I was on call for the hospital). Altogether, our inebriant-free dry spell lasted 33 days.

This isn’t the longest I’ve abstained from alcohol. I’ve given it up for Lent a couple times, but it’s probably been about ten years since I’ve done that.

I was probably overdue to shake up the habit of having a beer for no reason other than it’s Thursday night and I’m not on call.

How did it go?

I slept well. It’s a well-known fact that while alcohol can induce sleep, your sleep quality suffers when under the influence.

33 days of alcohol-free sleep was restorative and I felt well-rested despite waking up for work at 5:15 a.m. many days.

There were several days where I didn’t have to work and got up around 5 o’clock anyway, having already gotten seven or more hours of quality sleep and feeling refreshed.

I didn’t miss beer much.

Note that I didn’t say I didn’t miss it at all. There were a few times where I wanted to crack a cold one, like when I packaged up these goodies to ship to my friend Scott after losing a football bet.

a few of minnesota’s finest beers (and one from nd)

In general, though, sobriety was a non-issue. One night, we had friends over and I was needlessly worried it would be awkward when we explained we were in a sober October.

Would they check my ankle for a monitor? Sneak shots when we’re not looking to avoid drinking in front of us? Stage a faux family emergency and ditch us for a cooler couple?

None of that happened. If they glanced at my ankles, I didn’t notice. It was totally fine, fun and normal, even if an evening with friends and no beer was atypical for us on a Saturday night.

I was on call two of the other four weekends, and being a father and a blogger with a demanding job, I had precious little time to imbibe, anyway. The month flew by.

Out of curiosity, and to prove to ourselves that we are truly financially independent, I’ve tracked our family’s spending over the last couple of years.

Thankfully, I was able to demonstrate that we had achieved not only financial independence, but also financial freedom. I also learned some things I really didn’t know, like how much we spend specifically on different categories, including alcohol.

Between homebrewing supplies, liquor store purchases, and bar, brewery, and restaurant beverages, we have consistently spent about $5 a day on alcohol between two adults.

Some of that is for hosting parties. We give beer as gifts, particularly beer from a brewery in which we have some ownership. I’ve even splurged on an $11 beer at a football game, but I didn’t feel good about it.

With a high income in a high tax state, it takes about $3,000 in income to cover this particular expense. A full year of abstinence would be the financial equivalent of a $3,000 raise. That’s not insignificant.

Normally, I wouldn’t expect skipping a few evening beers here and there to have much of an impact on my waistline, but this sober October presented a unique opportunity.

A year and a half ago, I decided I’d like to lose ten pounds. I even said so on my website, thinking that accountability would lead to guaranteed success.

I didn’t have a plan, exactly. I mentioned maybe drinking less beer, and at the 18-month mark, I was actually up a couple pounds. Apparently, publicizing that you want something doesn’t make it so.

My friend Carl has talked about a mild form of intermittent fasting — not consuming calories for up to about 16 hours at a time — and I thought I might like to give that a try.

Such a plan is not very compatible with evening beers. A typical 5% ABV 12-ounce beer has about 150 calories, and a pint of IPA is closer to 300.

It’s actually kilocalories, but for some reason, we’ve dropped the “kilo.” I guess no one wants to think about consuming a million calories in one sitting, but it happens not infrequently.

Over the course of a month, two pints of IPA a day adds up to about 18,000 calories, or maybe a week’s worth of recommended calories for an average adult.

And, of course, no empty calories from beer or any other alcohol.

I lost eight pounds in October.

It’s impressive what a month of alcohol abstinence can do for one’s body.

From WebMD’s “Should You Stop Drinking“:

“Researchers at the Institute for Liver and Digestive Health at University College London Medical School did a small study last fall of 10 people who considered themselves to be “normal” drinkers and agreed to abstain for 5 weeks.

Their liver fat, a prelude to liver damage, fell by an average of 15%, and blood sugar, a sign of diabetes risk, fell by 16%. Blood cholesterol dropped by 5%, and the abstainers lost an average of 3 pounds. The only negative they reported was less social contact.”

That last point deserves a little more attention. I didn’t go to the monthly meeting of the local homebrewer’s club in October. I’ve got a lot of friends at those meetings.

After curling league — men’s league started mid-October — it’s customary to sit down with your opponent for a post-match beverage. I drank water one night and skipped the sit-down another night, citing the fact that it was late and I had to work early the next day.

Both were true, but in a non-sober October, I probably would have stuck around for one quick beer and a little more social contact.

I’m not saying people ought to drink for the social aspects. There are plenty of people who are social butterflies with or without alcohol, and a life free of alcohol is the healthiest and best option for many.

I’m just saying that for me, there are situations in which I’m a bit more gregarious and more likely to have fun with a cool beverage in hand.

I’m a little less ISTJ and a little more ESTJ with a beer in my belly. That’s Myers-Briggs personality test speak for a transition from introvert to extrovert, and alcohol is a great catalyst for that transformation.

“Beer, if drunk in moderation, softens the temper, cheers the spirit and promotes health.” – Thomas Jefferson

Our sober October is over, and we have had a little beer now in November, but the break from beer was a successful challenge and experiment.

It’s easy to settle into familiar habits, and when those habits aren’t necessarily the healthiest, an abrupt change can be a powerful way to mix things up.

Having seen the positive impact of a sober October on both my wallet and waistline, I can see us doing this from time to time again in the future.

I can also see us taking a different approach to those random Thursdays. With my pending retirement from medicine in 2019, I should have 52 call-free Thursdays a year.

Cheers to a happy and healthy future!