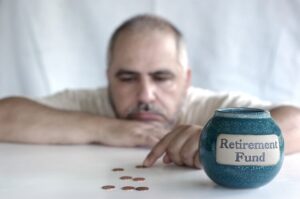 Today we continue our coverage of the great retirement book What Retirees Want. It is packed full of great information and statistics about the state of retirement today.

This post will cover several aspects related to affording retirement.

But before we get into the details, I want to share the book’s title for this chapter (chapter 9) because by itself the title says so much:

There are two awesome points made here:

Ok, I feel better having those off my chest. Hahaha.

Now let’s get into the subject, starting with this:

People save for retirement gradually, but if you think of the ultimate price tag, it’s the biggest purchase of a lifetime. Retirement costs far more than all of life’s other big-ticket items – buying a home, raising a child, paying for college. The average “cost” of retirement is over $1,000,000. The cost keeps going up, not only with inflation, but also with longevity. As people spend more years in retirement, they’ll need a lot more funds.

Most Americans are unaware of that price tag. A truly alarming eight in ten have reported that they have no idea how much money they’ll need for a comfortable retirement. But they are beginning to realize that they are underprepared – in many cases by a great deal. Only 45% of Americans over the age of 60 feel their retirement savings are on track. In fact, the average 60-year-old pre-retiree has saved only about $135,000 toward their retirement.

How far behind are Americans in funding their retirements? The answer depends on whom you ask and how it’s measured. Using the rule of thumb that retirees need 75% of their pre-retirement annual income, the Center for Retirement Research at Boston College estimates that half of all working households are at risk of being unable to maintain their standard of living in retirement based on their current savings and retirement income sources. Half of the households age 65+ are in the same situation. And half of all Boomers feel they need to catch up on retirement savings. They say they have fallen behind because of inadequate income, unexpectedly having to support family members, out-of-pocket health care costs, and having started saving for retirement too late.

Another rule of thumb says that total retirement savings should be at least eight times pre-retirement income. For the average household, that’s almost a half-million dollars. That $135,000 average falls far short. And a significant number of households have no retirement savings at all, including 13% of those age 60+ and not yet retired.

And to add to what the book says, check out this study. One of their key findings:

Four in 10 say “It’s going to take a miracle” to retire securely.

That sounds about right.

Overall, a lot of Americans are way behind on retirement savings and may not be able to retire when they want or at the level they want.

What does this mean for you? Not much other than to be a warning not to let it happen to you. Follow the ESI principles and you should be fine.

If you want more details on how to pay for retirement, I have a free email series called Creating a Great Retirement you can sign up for.

Now we get into a bit more of the “why” Americans aren’t going to have the retirements they want — and it’s not a shocker.

In our studies, Americans have told us they think they should be saving 15-20% of their income annually, and they know they should max out all tax-protected accounts such as 401(k)s. But that’s not what’s happening. The average annual savings rate (all savings, not just toward retirement) in the United States has risen a bit since the recession – largely due to the millennial generation’s saving activity – but is still only around 7%.

While roughly two-thirds of private sector workers in the United States have access to an employer-sponsored retirement plan, only 13% of participants contribute the maximum amount allowed (currently $19,500). Incredibly, 26% of those eligible for plans do not contribute to them at all. These accounts also suffer what is weirdly called “leakage,” when people tap into them (and bear the tax and penalty consequences), before reaching age 59 ½. Three in ten have taken a loan or early withdrawal, the latter common when people change jobs and fail to roll over their funds.

So they know what they should be doing and yet they aren’t doing it.

And as a result, many are way, way behind.

They don’t save enough, some not even participating in what are generally good plans, and even those who do then hurt themselves by borrowing from what they save.

Next the book tackles the issue of where Americans turn for their retirement advice:

Americans are near unanimous (92%) in saying that personal finances are a private matter, and nearly half of retirees say they don’t discuss retirement savings, investments, or finances even with close family or friends. Many people are more comfortable talking about their end of life than about their finances.

Retirees have told us repeatedly that they don’t know who or what is a reliable source of advice on managing their assets for and in retirement. Less than 40% work with financial advisors. More than 40% say they have no dependable sources of advice at all. And what sources do they trust? Most trusted are financial professionals, family, and friends. Least trusted are social media, the internet, and news media generally. In between are employers, financial institutions, and the financial news media.

The book begins to wrap up this section with the following:

Well prepared or not, people retire and adjust to living on a new mix of spending habits and income sources. But most have three things in common. First, they worry about finances, starting with the potential expenses of health problems. Other commonly cited concerns are rising costs, lack of money to do the things they want to do, and outliving their wealth.

Third, retirees are resilient and adaptable, willing to make lifestyle adjustments and course corrections (the less painful the better) during retirement in order to maintain their financial footing and enjoy this new stage of their lives. The most basic involve adjusting finances, working more, and spending less.

I have said it before and I’ll say it again: margin of safety is a vital part of having a financially sound retirement.

The more of margins you have available to you and the more impact each has, the better.

With them, you don’t need to worry and you will have more than enough to cover most issues.

Without them, you are left to the whims of life, which is generally not kind.

Of course there are things that are so unexpected and massive that almost no one can cover them. But for the vast majority of people and conditions, having a wide variety of margins of safety will cover most expenses.

This is why I am wary of Lean FIRE — retiring with just barely enough to meet your living expenses. Because things will go wrong and when they do, these people won’t have many options.

As I commented in the Millionaire Money Mentors forums on a discussion about this topic:

Here’s what I imagine when I think of Lean Fire:

Let’s end today with the book’s survey results of the top financial worries in retirement:

Most of these can be severely curtailed if not outright eliminated by two things:

My suggestion for anyone reading this is to educate yourself on money management, begin creating a plan for retirement (both the financial and life sides of retirement), and then work to apply the plan to create the retirement you want.

That’s it for this time. To read the next post in this series, see What Retirees Want, More on Affording Retirement.