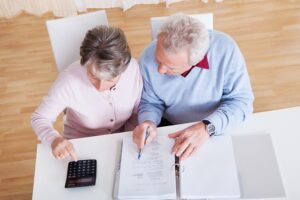 Today we continue our coverage of the great retirement book What Retirees Want. It is packed full of great information and statistics about the state of retirement today.

Last time we discussed how unprepared Americans are when it comes to affording retirement.

Today we’ll continue that topic, offering some ideas on how potential retirees can close the funding gap.

The book shares this data as yet another point in how poorly Americans are prepared for retirement:

Bankruptcy filings are “graying” with the population. The bankruptcy rate for age 65+ households has tripled over the last three decades. Individuals age 65+ now account for over 12% of all bankruptcy filers, a dramatic rise from 2.1% in 1992.

It doesn’t say whether or not these people are retired, but we can assume that many (probably most) are since it’s data for 65+ households and the average person in America retires at 61.

Anyway, it’s just reflective of the poor job most have done in planning for retirement.

But, there are options. The book next turns to some ideas for making retirement affordable, starting with an old strategy…

The book’s first idea for closing the retirement financial gap is to work more.

Here’s what it says on the topic:

How do people try to catch up financially? The greatest impact comes from working a bit longer, even part time. That adds time to save and delays tapping into retirement savings. While working, people can maximize their contributions to 401(k) and other IRA accounts, and 60% of pre-retirees said they would delay their retirement to improve their finances.

As we detailed, working part time in retirement is becoming the new normal. Seven to ten Boomers expect to work past age 65, are already doing so, or do not plan to retire at all. Many retirees work out of financial necessity, but the majority work for a combination of both personal and financial advantage – staying active and socially engaged while supplementing their retirement income. Andy Sieg sees an increasingly important role for work: “Many retirees’ income streams from savings and Social Security are insufficient. However, we’ve been very fortunate that, at the same time as the longevity wave has been building, the nature of work and the workplace have changed in ways that make it much more feasible and energizing and socially rewarding for people to continue working later into life. Retirees want to stay active and engaged, especially mentally, and the twenty-first century multigenerational workforce values skills and experience. So I’m optimistic about the overall Boomer financial journey through retirement because of the extent to which they’re staying active and engaged and working.”

Today’s retirees are already working in a variety of formats – regular part time or seasonally, in their former occupations or trying something new, for their old employers or working for themselves, monetizing a hobby or starting a new business. The gig economy offers work-when-you-like options, from driving for rideshare services, to doing administrative or technical piecework online at home, to teaching English to children in China. If needed to improve their finances, three-fourths of retirees and pre-retirees say they would return to work part time in retirement, and 43% would consider working full time.

Given that we’ve covered “earning” in idea #1, it should be no surprise as to what the book’s second suggestion is for making retirement finances work…

Idea #2 for making retirement affordable is to spend less (i.e. “save“) which the book describes as follows:

Cutting back on expenses is an obvious course correction. Nine in ten retirees say they’d do so if needed, and 60% say they spend less money now than when they originally retired. Retirees have more time to do their homework and manage their budgets. Finding discounts and taking advantage of loyalty programs help the cause. But retirees want to maintain and enjoy their lifestyles, so general belt-tightening can definitely have a positive effect.

Other Ways to Make Ends Meet

The book offers some additional ideas for making retirement work financially including the following:

The retirees we surveyed indicated their willingness to make a variety of other course corrections with financial impact. For example, they say they’d sell possessions, perhaps the second car if no longer needed, perhaps as part of a decluttering process. Another way to make money is by turning a hobby into a source of income.

Finally, one of the most beneficial actions retirees can take is investing in their health – exercise more, eat better, or stop smoking. The payback can’t be precisely calculated, but better health means lower everyday medical expenses and the delay or better management of chronic conditions and their long-term costs. The value in terms of personal well-being can be felt even sooner than the financial value.

Some thoughts on this:

The book next addresses cost of living and how that plays into overall retirement expenses:

One of the biggest variables behind how much retirement costs and the pace at which retirees spend is location. GOBankingRates calculated how long a $1 million nest egg lasts on average state-by-state across America. It would last 25 years or more in Mississippi, Arkansas, Oklahoma, Michigan, or Tennessee, but only around 17 years in California, Alaska, New York, Connecticut, Maryland, or Massachusetts. In Hawaii, it would be consumed in a dozen years.

Hahaha. Looks like they discovered that some places are more expensive to live in than others.

Just like your housing decisions have a huge impact on your net worth, where you live has a big impact in retirement because housing (and its associated costs) are such a large part of almost everyone’s budget.

Or if you wanted to go even lower you could move overseas and save 50% or more on your annual expenses.

Later on the book discusses home ownership in retirement further, making these comments:

In the years ahead, one of the most significant financial moves in retirement for many people may be to monetize the value of an owned home. Sell and then rent, adding all the proceeds to the retirement fund. Or sell and buy a downsized home, pocketing the difference. And perhaps relocate in the process to someplace with lower housing, living, and property tax costs.

Lots of options for taking what is generally the largest asset people own (at least the average American) and using it to cut costs and/or increase income (you could sell, invest the proceeds, move to a lower cost of living area, and end up generating more income than your new costs of renting).

Many retirement books talk about annuities and this one does as well in this section.

They discuss it in context of affording retirement and having a consistent income you can rely on.

When asked to describe the ideal retirement investment, three-fourths of American adults said something that provides guaranteed income and something that is guaranteed not to lose value. That’s an annuity. However, annuities come in complicated variations, many consumers are wary of them, and they are underutilized.

The primary upside of an annuity is the security of guaranteed income. An insured person who lives long “comes out ahead.” And for people who lack financial discipline, annuities prevent them from spending down their assets too fast. The downsides start with the money’s no longer being in the insured’s control – it takes a psychological leap to trade a lump sum for a series of payments in return. Inflation can reduce the spending power of payments (though cost-of-living riders are available). The insurance company could fail (through contracts are government-backed up to a limit). And if the insured dies prematurely, the estate can “come out behind.”

Many financial experts recommend annuities or other guaranteed-return investments as part of the retirement funding mix. The idea is to establish a combination of annuity, pension, and Social Security income to meet retirees’ baseline living expenses indefinitely, regardless of the performance of any other investments.

You probably know what I think of annuities, but let’s cover them anyway…

I do agree that “for people who lack financial discipline, annuities prevent them from spending down their assets too fast.” So if someone has limited knowledge and/or limited self-control, annuities can be better than other options. I’ll give you that.

However, for someone with knowledge and self-control, annuities are generally a bad option IMO.

Here’s a research paper from the Center for Retirement Studies at Boston College. Their findings:

In other words, you get 50 to 80 cents back, on average, for every dollar you invest in an annuity.

Now I am not a smart man (use Forrest Gump’s voice to make that work), but getting back 50% to 80% of what you invest is not a good deal.

To be fair, the research paper notes that the value of an annuity isn’t just in the money you get back (you thought it was, didn’t you?). They continue:

While the expected value of deferred annuities is substantially lower than that of immediate annuities, their insurance value is greater because they protect more effectively against outliving one’s assets.

In the end, the paper comes to the conclusion that:

It’s the same argument many use for permanent insurance — that the income/value plus the insurance benefits are worth more than the cost.

Let me say, as I noted above, if you need the insurance as well as the income, then yes, annuities are probably a good deal and “worth it”.

However, if you know what you are doing, can invest your own money, and either don’t want the insurance or are self-insured through many sources of income or a high amount of assets, then annuities are certainly not a great deal. In fact, they are a very bad deal IMO.

That’s it for this time.

To read the last post in this series, see What Retirees Want, Conclusion.