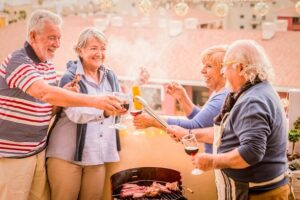 That is certainly true of a retirement book I read recently titled The Wall Street Journal Complete Retirement Guidebook.

It was written in 2007, which seems like a million years ago, but as I read it I found as much or more wisdom than I have in most of the other 50+ retirement books I’ve read in the past several years.

So over the course of a few posts, I’ll be sharing some key thoughts from the book as well as my comments on those.

Let’s begin with this introduction from the book:

Most of these retirement books have focused either solely on the financial side of retirement or solely on lifestyles. We’re going to take a different tack.

First, we address both money and time: how to organize your finances and your days in your fifties and beyond. After all, it’s almost impossible to answer the most frequently heard question among would-be retirees — Have I saved enough money? — unless you have some idea of how you plan to spend your time in retirement. Depending on your vision (A modest retirement close to home? Days filled with travel?), your nest egg might be more than sufficient or in need of major repairs.

Second, if many of us fail to consider how finances and lifestyles go hand-in-hand, it’s because we tend to regard retirement as an event, something that happens on a weekday afternoon. Actually, the best retirements are a process, one in which many decisions and refinements are made along the way. That’s the approach we’ll take in this guide: looking at later life as a series of steps involving your lifestyle and finances. In doing so, we think you will end up with a more rewarding and productive retirement.

See what I mean? So much good stuff in such a short section already!

Some comments from me:

Them: I have $5 million saved. Do I have enough to retire?

Me: How much do you intend to spend in retirement?

FWIW, it is almost always a question from someone who has several millions of dollars (for whatever reason), so the answer, unless they are spending a TON, is probably “yes”. But I can’t be sure unless I know their spending. Unfortunately this is where the conversation derails because they don’t know the answer (usually) but still want a response from me. Ugh.

Let’s move on with these thoughts from the book:

From the 1950s through the early 1990s, retirement in the United States had much the same look and feel.

Today, in the space of a single generation, retirement for many has become a puzzle — with dozens of decisions and far too much guesswork. Four changes, in particular, have made the process more complicated: extended life spans, the demise of traditional pensions, women’s entrance into the labor force, and the rising cost of medicine and long-term care.

I LOVE that they recognize that the process of retirement (and thus the definition of it — which we’ll address in more detail in the next post) is changing. This is something that 90% of the books written today either don’t acknowledge or simply take for granted (without mentioning it). I’m glad they brought it up.

BTW, healthcare is by far the top issue in retirement — especially early retirement. I would guess that 75% of the millionaires interviewed here mention it as a retirement concern. Not much else to say on that topic that hasn’t already been said — I think everyone reading this is well aware of the issue.

Time in Retirement as Important as Money

Almost everyone thinking of retirement considers the money side of things (thus the most-asked question being about money).

But so many forget to think about what they will do with their time. This is because it’s a no-brainer, right? You don’t have to plan for free time. You simply do whatever you want and things are great, right? Wrong.

Retirement isn’t a one week vacation at home where you go with the flow and it’s just awesome to be away from work. It’s a 20-year, 30-year, or longer lifestyle where you have to fill 24 hours a day with something.

For a week, you can easily do that since four days is filled up simply destressing from work. Hahahaha.

But that’s impossible to do for 30 years — which is why so many people “fail” at retirement and go back to work.

I have been saying this for a while now, so I was very pleasantly surprised to see the book take a similar line of thinking:

It’s one of the biggest mistakes that people make in the years approaching retirement: failing to consider how they wish to spend their time in later life. Yes, we all need a good-sized nest egg once we leave work, but when it comes to time and retirement, most people give almost no thought to what an average day might look like.

One reason, of course, is that retirement seems…easy, welcoming. (What can be so tough about not working?) There’s also the assumption that leisure activities will be just as fulfilling, if not more so, than work — a dangerous assumption for people who have enjoyed their careers.

It’s not that people can’t see themselves in retirement. If you ask almost anyone what he or she plans to do in his or her sixties and beyond, the answers invariably involve some mix of travel, play and work. Specifics, though, are few and far between. As it turns out, vague answers to the question, “What will I do for twenty or thirty years?” can be just as debilitating as vague financial goals.

So much great stuff here!

Just like when a person doesn’t know their retirement expenses makes it’s impossible to say whether or not they have enough money to retire, if they don’t know how they plan to spend their time, it’s impossible to tell them whether or not they’ll have a great time. Sure, they may “luck” into some activities that keep them occupied, but generally I recommend planning, knowing, and testing these out in advance — because “luck” is not a great retirement strategy. Hahaha.

Author Wes Moss suggests having 3.5 core pursuits (hobbies on steroids) prior to retiring. Having 3.5 or more is a sign of a happy retiree based on his research. Having below 3.5 is a recipe for being an unhappy retiree.

After living the retirement life for over six year, talking to tons of retirees (online and in person), interviewing retirees, and reading a gazillion retirement books, I created five categories that I believe make up the best mix of activities for a great retirement life for most people:

Then, since people seem to have trouble finding things to do to fit these categories, I created a Huge List of Awesome Retirement Activities. If you can’t find more than enough to keep you occupied in retirement on this list, you’re probably better never retiring. lol.

Let me just pause and say if you spend less than five hours a year on a 30-year, multi-million dollar financial decision, you are going to get what you deserve.

Really, FIVE HOURS per year? Many people spend more than that deciding what type of fruit to buy at the grocery store. Ugh. The way Americans approach financial planning is killing me!

Anyway…the book next makes what should be an obvious statement, but based on what Wes has found isn’t so clear to many:

We’ve found that the retirees who are most satisfied with their lives are the ones who thought and talked about their hopes for the future — typically, several years before retirement itself — and then took specific actions to move closer to those goals.

In other words, they planned for retirement.

Who would have ever thought that this was important? Hahaha.

Seven Questions to Ask About Retirement

Want some guidance on what you should consider when planning for in retirement? This book has some suggestions for you:

Ronald Manheimer, executive director of the Center for Creative Retirement at the University of North Carolina in Asheville, has distilled seven questions you should consider before retiring:

1. What Is My Image of Retirement? And Is It Useful and Accurate?
2. When Is It Time to Leave My Job, and Do I Want to Return to Paid Employment, Possibly in a Second or Third Career?
3. How Do I Balance My Dreams and Goals with My Family and Societal Responsibilities?
4. Can the Next Step in My Life Be Truly Revitalizing?
5. How Will I Structure My Time?
6. Does My Past Pattern of Dealing with Change Provide Me with a Good Model for Entering Retirement?
7. What is the First Step for Putting My Retirement Plan into Action?

Of course the book goes on to offer thoughts on each of these. I’ll share some of their conclusions/suggestions in posts to come, but if you really want to dig into these, you’ll need to get a copy and read it for yourself. It’s well worth the time and can count toward the five hours of retirement planning you should be doing this year. Hahahaha.

Personally, I break my retirement questions down to simply:

After that, everything else is extra IMO, but I see where they are coming from in breaking out some aspects of these two questions into more detailed options.

The book then goes one step further and says this:

To these seven questions, we’ll add an eighth…

We’ll cover that eighth question in the next post in this series. Stay tuned.