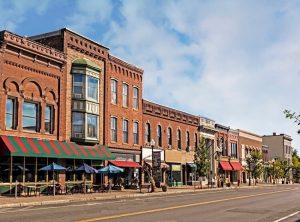 I have seen tons of articles over the years about the financial impact of where you live.

I’ve even written some of them myself. 🙂

Today I’d like to tackle the issue of your home location’s impact on your finances.

The result can be pretty substantial.

There are many different philosophies on why people live where they live when it relates to finances. The two main ones are:

By the way, I’m only addressing financial issues of living where you do. There are many non-financial reasons to live in a place such as to be close to family, to be near certain recreational activities, to provide a certain lifestyle for your family, etc. I’m not addressing those in this piece.

Here’s my take on the issue:

Duh! Tell us something we don’t know, right? But that’s impossible! That’s what you’re probably thinking right now. Why is this? Because there’s an underlying assumption that you can’t earn a great salary in a lower cost of living area. This bias is even inherent in the philosophies above.

But I’m here to tell you that’s not the case. You just need to follow the right steps.

How to Make This Happen

Here are the key steps to live in a low cost city with a high salary:

The Difference It Makes is HUGE!

This probably goes without saying but the savings difference between some cities is enormous.

And it gets even better (or worse, depending how you look at it) as you make more.

I’m not saying that I’m the best example of how to do this. But I am an example. And if I can do it, others certainly can — and probably do it better!

Here’s what I did with the tips above:

I started out well because of the MBA. I left school with an above average salary. And in the 25 years since then, I’ve grown my salary at a much faster rate than the average population.

As I managed my career and considered new job opportunities, I always factored in the costs of a city when I received a job offer.

Of course it was not the only factor that led me to take one job over another, but it certainly was a factor in the decision.

Just so you can see how this played out, here are the cities I’ve lived in and their cost of living index (100 = average US city cost):

Overall, most people do not live in a city because it’s cheaper than another city. I get that. There are usually way more important issues that dictate where people live.

All I’m saying here is that where you live has a very big impact on your finances. At the very least, you should consider a city’s cost-of-living index before you move there. And if possible, take it a step further. Develop a high income while moving to a lower cost-of-living city. Doing so could save you hundreds of thousands of dollars over your working career.