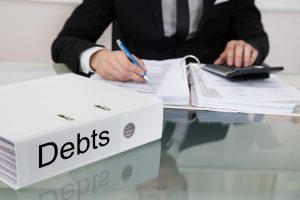 We’ve all heard the stories of people who have gotten out of debt and how wonderful it is. Dave Ramsey has made the “freeeeeedommmmmm” yell standard for his listeners who have eliminated all their debt.

And yet the debate rages — is it wise to pay off all your debt or not? There are arguments on both sides.

This post is designed to address one aspect of the debt issue — the cost of debt. Many people know that it’s expensive but they don’t really tally up the numbers. That’s what I hope to do here.

And for those of you who don’t know, I’ve been debt free for 20 years or so (other than my recent house purchase where I needed to take a short-term loan because my previous house hadn’t sold yet).

The Cost of Debt

Let’s begin with this post from Money Magazine piece titled You’re Going to Spend $280,000 on Interest in Your Lifetime. The highlights:

The typical American consumer will fork over an average of $279,002 in interest payments during the course of his or her lifetime. So says a new report from Credit.com, which analyzed the lifetime cost of debt in all 50 states and the District of Columbia, based on average mortgage balances, credit card debt, and credit scores.

The size of the nut varies dramatically from state to state. Residents of Washington, D.C.—where average new mortgages are $462,000 and the average credit score of 656 falls squarely in the “fair” range—can expect to pay $451,890 in interest, the highest in the nation.

Concerned D.C. residents might want to consider hitching a ride to Iowa, where the average new mortgage is the nation’s lowest, at $120,467. Add in an average credit card debt of $2,935—also the lowest in the country—and a credit score of 689, and residents of the Hawkeye State have a lifetime cost of debt of “only” $129,394.

As someone who grew up in Iowa I had to smile. The reason there’s low debt in Iowa is because there’s nothing worth buying in Iowa! Ha! (Ok those of you from Iowa, don’t shout me down — I’m just kidding. I love Iowa, still consider it “home”, and my parents still live there, so settle down and take a chill pill.) 🙂

Let’s discuss this a bit before we move on:

Now let’s dig into the cost of debt itself. Go with me along this path:

But that’s a bit overboard, right? EVERYONE borrows something for some time. I paid off everything in my 30’s and still borrowed for a decade or so. So let’s assume that a person has to borrow some, but pays it off in 20 years, saving $140k.

Yes, the numbers may be off a bit but if anything they would be better. By paying off debt early you avoid interest over a long period of time, saving you way more than simply taking a fraction of the total. But it’s close enough and directionally correct.

So let’s all agree that debt costs you a ton.

Investing Versus Paying Off Debt

Now I can hear a bunch of voices saying they can borrow at one rate and invest at a higher rate, so debt pays for itself.

In theory this may be true. I understand this intellectually, but consider the following:

If you want a well-thought-out response to this issue, see Apex’s comment on 15-year versus 30-year mortgages.

How about this as a balance: save up your money and invest it. Let it grow, then buy a house by using a large downpayment and make extra payments to get rid of the debt within 10 years?

Of course, if you grow your income as I recommend, you can do both. While we were paying of our house, I maxed out my 401k contributions every year. Yes, you can invest AND eliminate debt.