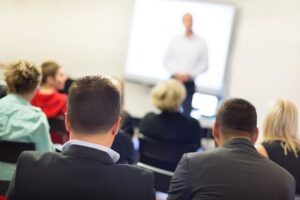 As you know, we’ve been to three direct mail retirement seminars so far.

Two have been pretty good (the first and third ones — we even met with two planners from the third seminar) and one not so good (the second seminar.)

What you don’t know is that we actually planned to attend a fourth one. But the day before it was scheduled the seminar was cancelled as the speaker came down sick and didn’t want to risk passing it along to attendees.

It’s supposed to be rescheduled, but I’m not sure I want to attend another one of these for a while. That’s because we recently had a similar but different kind of invitation come through the mail.

This one was a workshop, class, or seminar — whatever you want to call it.

We attended because we wanted to get more in-depth retirement thoughts and see if we’d learn anything.

The workshop covered a wide range of topics and some “interesting” points of view. In fact there’s so much to share with you that I’ll be reviewing the workshop in three separate posts!

But before I dive in completely, let’s back up a bit and start from the beginning…

Our Invitation to the Retirement Workshop

In early February we received a mailer that invited us to attend a workshop (my words — they called it a “course” here and there, but there’s no consistent labeling).

Here are the details:

Here are the sections the flyer listed:

I must say, I was intrigued. Here was an organization/planner offering six free hours of retirement education. It made me wonder, “What’s up with that?”

Of course I assumed it was a way to gather clients, but since I’m always up for a financial adventure (as is my wife), we decided to sign up.

Arriving at the First Class

On Tuesday, March 3 we headed out around 5:30 pm since we weren’t exactly sure where we were going.

Plus traffic gets a bit crazy around UCCS at that time, so we wanted to leave plenty of room in case it took us some time to find it.

It did not take us much time at all. By 6 pm we were on campus and in our room.

Interestingly enough, we were not the first ones there (we were second).

Just before we walked into the classroom we checked in with two ladies at a table and received our workbook.

The workbook would closely mirror the presentation slides. This was nice, none of our dinner events had provided any notes, but I would have preferred the workbook to match the slides exactly as it would have been easier to make sure we had everything recorded.

Anyway we got our seats and as people filed in the hosts brought in cookies, coffee, hot chocolate, and hot apple cider. Free stuff! We were starting off on a good foot! 😉

The seminar began promptly at 6:30 pm.

John kicked us off by introducing himself, the organization he was representing, and the workshop itself.

I did some web searching on SOFA and found this in a forum:

I read another review by a SOFA “member” (presenter). He indicated that how it works is that SOFA itself is a non-profit, and the presenters “donate” their time giving the presentations – which is how they are free. However, you have to realize that these presenters pay SOFA for their membership and then sign up to do the SOFA presentations as a mechanism to generate leads for their real business, turning attendees into paying clients. The presenters primary occupation might be as a financial planner, a wealth manager, an insurance salesperson, etc.

Not sure this is accurate either but if I was a betting man I would say it is.

Anyway, after the preliminaries we were ready to get started…

Section 1 — Retiring in the 21st Century

He kicked off section 1 by showing us this video:

It was cute and meant to illustrate how absurd it was to lend someone money who couldn’t repay.

He then launched into a look at the federal deficit and drew the comparison between it and the video.

He also stated that because of the deficit tax rates would most likely be higher in future years. He noted that later he’d share how we could reduce our retirement tax burden.

John then talked a bit about retirement itself and asked us to think about what our retirement would be like, especially what we would do with our time. He told us it was our homework to think this over and have a chat with our spouse (if we had one) about what we wanted to do when we retired. I told my wife we’d simply look at our calendars and that’s what we’d do in retirement. Ha!

He said we needed a clear vision and plan for retirement or else it was likely our retirements wouldn’t be enjoyable. This matches what I’ve read in almost every retirement book.

As such, I was starting to track with him on this line of thinking. Then he pulled back a bit and started sharing some details from the workbook.

The first thing he listed was what they called the old retirement paradigm. It went like this:

Then he contrasted the way it was done in the past to how it is now. John said we currently we operate under a new retirement paradigm which goes like this:

Overall, I would say both of these are generally correct. There’s no doubt that the world of retirement saving has moved dramatically from pensions to self-saving plans.

Then he summarized section 1 with the following:

Not much to criticize here. The information was good so far IMO. But it felt like we were being set up.

The message was starting to come through: “Things are changing and you need to be ready for them with new/different retirement plans.”

It felt to me like this was step one of a few which ultimately would end with, “I’m the one who can successfully help you get through retirement.”

From there we moved on…

In this section he followed the same pattern as in section 1, except this time the focus was on taxes.

According to the workbook, the old tax retirement paradigm was:

And supposedly the new tax retirement paradigm is:

We then launched into slide after slide and “expert” after “expert” showing us how current tax rates were historically low, the deficit was out of control, and as a result only a moron (my word, not his) would believe that future tax rates would be equal to lower than they are now.

Add to this that we’ll likely need to earn as much in retirement (so income won’t decrease) AND we’ll lose many of our tax deductions (like mortgage interest and charitable giving) in retirement. When all this hits to make the perfect tax storm, we are in for a world of pain in retirement.

I’ll get to my thoughts on this in a minute. For now, here’s how the summary for this section came down:

Here are my thoughts on this section:

FWIW this was the same line of thinking used by the third direct mail planner we went to. I’m wondering if this is the latest “thing” for planners to sell: taxes are going up, you don’t know how to minimize them, and I can help you. Seems like a good sales pitch — create a problem and then solve it.

That’s it for section 2 and the start of this workshop.

Any thoughts so far? Agree or disagree with what’s being said?

To read on, check out part 2 of this series.