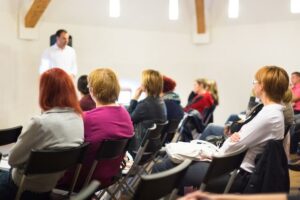 Today we’re continuing the overview of our recent trip to a retirement workshop.

If you missed the first part of this series, I suggest you read it before this post so you’re up to speed.

Last time we covered sections 1 and 2, so let’s get rolling today with section 3…

This section started with a reiteration of points already made…tax rates were going up, you may need as much income in retirement as while working, your tax bracket could be higher, and so on.

Now they presented their solution to these problems.

The recommendation was to get to the proper allocation in the three types of retirement accounts (according to the course/teacher):

After a lot of methodology, they summarized their recommended allocation for each of these as follows:

So if you had $3 million, it would look as follows (my example, he didn’t share this):

Now let’s consider the audience he’s talking to — people who are mostly in their 50s or early 60s.

The 401k was established in 1978 and from there took some time to be adopted by companies on a widespread basis.

The Roth 401k (and Roth IRA) was established in 2001. It took some time to spread as well. In fact, when I retired in 2016, none of the companies I worked for had offered a Roth option. All had regular 401ks though.

Even today there’s a gap between 401k and Roth 401k offerings. Here’s a quote from CNBC highlighting this fact:

Seven in 10 employers now offer a Roth option within their 401(k) that lets workers put in after-tax dollars, which can then grow and be withdrawn tax-free in retirement. But only 18 percent of workers contributed after-tax dollars to their 401(k) in 2016, per the Plan Sponsors Council of America.

So needless to say, most Americans have most of their money in tax-deferred 401ks. (I looked but couldn’t find definitive numbers for the total amounts in 401ks versus Roth 401ks.)

The audience for this workshop has and even more disproportionate amount in tax-deferred options because that’s all they’ve known for most (or all) of their working lives.

Now they have one of two problems. Those with $187k don’t have enough money. Those with $1.2 million likely have too much in tax-deferred accounts.

I wonder who could help these people with either issue? 😉

We have the vast majority of our money in tax-deferred options (the rest is in taxable accounts). The reason: At first, using a 401k was the only option. Then once Roths showed up, we always made too much to qualify for a Roth (even this year, in retirement, we earned too much). And as for conversion from our IRAs to a Roth, do I really want to convert now and pay even higher taxes? And yet I might have massive taxes in the future. There seems to be no great answer.

I know, tough problem to have. I’m sure you feel sorry for me.

But seriously, anyone else in this position? If so, what are you doing (if anything)?

Before we leave this section, let me cover a couple random items that came up:

At this point, the class took a 10 minute break.

When we came back to the classroom, the presenter was Justin Fish, an estate planning attorney from Colorado Springs.

This turned out to be the most interesting and valuable part of the workshop for a couple reasons.

First, we recently finished our estate plan and I wanted to see what he thought of it.

Second, after what he said, I’ll probably arrange a follow-up meeting with him to re-look at what we did.

Here are the highlights of Justin’s presentation:

From there we got into questions and answers and several things stood out:

He offered a free follow-up visit as well, and I think we’ll take him up on it. The one factor I haven’t been able to find in an attorney is someone who does all the transfers, but since he does, I think setting up a meeting with him would be worthwhile.

Of course I’ll keep you updated on details if and when that happens.

The presenter didn’t talk about how to claim Social Security (SS) for maximum benefits (which I would have loved to hear) but how to set up your finances so your Social Security isn’t taxed.

Here are the highlights:

Overall, it seems to me that there’s more money at stake by working on maximizing SS benefit claims versus focusing to reduce taxes, but perhaps I’m wrong.

At this point, if I get any SS I’ll consider it a plus as I don’t need it.

And I don’t think there’s a realistic way I can or want to set up my finances so that none of our income is taxable. I’m assuming I’ll pay tax on 85% of what I receive.

This was the end of the first class. As we drove home we chatted about what was shared and if we learned anything new (not much for me and my wife said it was a bit fast for her).

Anyway, we had a week to digest it all and were prepared to go back for class #2 on Tuesday, March 10.

Any thoughts on these sections? Agree or disagree with what’s being said?

For details of the last class as well as a wrap up of the entire workshop, read part 3 of this series.