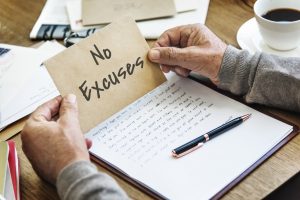 Well, it’s been awhile since I’ve had a good rant here, so let’s fire one up today. 😉

I’ve been blogging on one site or another for over 12 years now.

It doesn’t take nearly that long — in fact it takes about two minutes — to realize that people like to make excuses about why they aren’t wealthy.

No matter how simple the topic or suggestion might be, there’s someone with an excuse about why it won’t work or why they can’t do it.

Here are some I hear most often:

And on and on.

Most Won’t Help Themselves

I’m not going to address these individually other than to say they all have very simple solutions for someone willing to take a bit of advice.

But here’s the bottom line: most people don’t want help. Most don’t want to do even the simplest of tasks to help themselves become better off. What they do want is to do exactly what they are doing now (which requires zero effort or sacrifice) and still become wealthy. In the meantime, they make excuses to make themselves feel better about why they aren’t wealthy (because it’s out of their control.)

It’s not only blog readers. I used to see this all the time in real life.

If It Takes Effort, Few Will Do It

My wife and I were financial coaches for years. We would meet with people to help them with basic financial issues (mostly budgeting and getting out of debt) at no cost to them. They were referred to us when they contacted the organization we were volunteering for and asked for help. We lived in Pittsburgh at the time and got all the referrals for the North Hills in Pittsburgh where we lived.

Here’s a rough estimate of how the numbers broke out:

So if you’re doing the math, somewhere between 2% and 6% would actually go through the process, do the work, and then take steps needed to get their lives on the right financial path.

Most of them wanted a 15-second answer to a 20-year problem. Seriously. They wanted to know how we could get them out of debt quickly after they had taken five, ten, or twenty years to build up that debt. Oh, and they didn’t want to have to change any of their habits to do so.

Not only that, but of the people who did make it through to the budget review, most wanted no part of making any changes. We had people tell us that things like weekly manicures for $60 each and nightly trips to a restaurant were “necessities” and there’s no way they could cut them out. We’d explain they then either needed to make more money or cut something else, two things they couldn’t or wouldn’t do. Ugh.

Now I must pause a minute here and say there are people who legitimately have issues. They don’t make enough to do much of anything and might be unable to work. But those people are few and far between. The vast majority of people who claim they can’t take any financial steps are simply too lazy and would rather make excuses than take action.

These days I get the most excuses about income (specifically around growing your career) — why someone can’t earn more to help themselves financially. My general thoughts on this are:

And it’s not just careers. I could make the same arguments about almost any financial topic — saving, investing, retirement, side hustles, and on and on.

So STOP MAKING EXCUSES! Personally, I don’t care if you are poor your entire life if you refuse to help yourself. That’s your choice. But don’t try to justify it with one excuse after another. I’m tired of hearing it.

If you want help and will do something, others will help you. I will help you. That’s what this blog is about — helping people achieve financial independence. But if you want to make excuses, you’re not doing anyone any good — especially yourself.