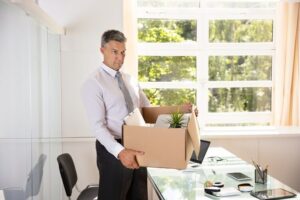 We’ve already covered The Problems with Retirement, How to Define Retirement and Problems Retirees Face, and Why Work Works in this series, so if you missed those, you may want to go back and read them before reading this post.

The Four Stages of Retirement

We begin today with the book sharing the four stages of retirement as follows:

Although it’s impossible to specify the time needed to feel adjusted, social scientists have been able to map out the stages of the process. Researcher Robert Atchley has proposed such a model, laying out the various phases that are likely to occur, each characterized by a particular set of emotions and thought patterns. Although there are variations on this model, we have presented the four phases that deal directly and specifically with retirement adjustment:

1. The Honeymoon. The very early stages of retirement, in which emotions are generally positive as retirees enjoy their new freedom from work and its schedules. This space is often marked by vacations, exploring new interests, or simply rest and relaxation. Emotionally, retirees may experience the elimination of stress and some euphoria, feeling that they have reclaimed their lives for themselves and that their time is their own to use how they see fit.

2. Disenchantment. This phase can begin a few weeks to a number of months after retirement. It is a period during which retirees may experience an emotional letdown and a decline in subjective well-being as they come face to face with the reality of day-to-day living devoid of direction. Situational elements, possibly unforeseen, may contribute to this let down, such as a concern that financial resources are more limited than initially thought or that some activities are not as absorbing as they expected. Retirees may also feel the loss of benefits provided by the workforce such as a weakening of identity and self-worth, feelings of being disconnected and without a meaningful role in society, and a sense of living unproductively.

3. Reorientation. At some point, possibly as long as a few years after they first retire, retirees will begin a reevaluation of their circumstances. During this phase, attitudes about what it means to be retired start to change. Retirees come to a better understanding of retirement’s social and economic components as well as a more realistic understanding of what it means to be retired. Many are likely to take a careful look at their lifestyles and begin to outline ways to improve the way they live.

4. Stability. Through the process of reorientation, retirees eventually come to terms and feel comfortable with the idea of being retired. At this point, the retiree has developed an alternative lifestyle that does not include work as a primary component. In addition he or she will have abandoned the work role as a primary means of self-definition. New roles and patterns of living are likely to have developed, with routines and goals established to provide meaning and direction to their lives.

Lots of thoughts on these:

The book then shares some stats on how well people are adjusting to retirement, though they don’t break this out by the four stages.

Consistent with what other social scientists have found, our survey confirms that adjusting to retirement is not without its problems. Of the 1,477 retirees we interviewed, only 44% described themselves as completely adjusted to their new lifestyle, and only 53% felt their adjustment was easy to accomplish. At the opposite end of the spectrum, we found a rather large group who are having major issues — about one in four retirees say they are having a very difficult time or feel they are only a little or not at all adjusted to being retired. The remaining 32% of retirees are in a sort of retirement limbo — they’re not having major adjustment problems, but they’re not completely comfortable with their new lifestyle either.

This is not to say that all or even most retirees are miserable. In fact, three-quarters claim that they are happy with their decision to retire, and a further 17%, while not happy, at least claim to have no regrets about leaving the workforce. Even spanking-new retirees share these feelings despite their evident difficulties adjusting. Additionally, three-quarters of all retirees say they feel less stressed in retirement, and 55% rate their overall quality of life as excellent or very good. Notably, this is about the same proportion we found among those who are working.

My comments on these findings:

Next the book moves into results among those who retired by choice versus those who were forced to retire by some set of circumstances.

That being said, whether retirees were completely pushed, completely pulled, or a little of both, our results showed a more positive outcome for those who were pulled into retirement. First of all, when we took a look at those who are well-adjusted to retirement, 68% felt they retired by their own choice, but only 31% of the less well-adjusted made that claim. Less well adjusted retirees also found their forced retirement to be particularly upsetting and felt that it interfered in their ability to enjoy retirement.

This makes a lot of sense.

People who retire on their own terms are probably both more prepared for retirement (which makes people have better results and thus be happier) as well as happier with the decision going into it.

Those who were forced to retire by job loss, health issues, and the like were likely not prepared and went into it with a bad attitude, something they may never recover from.

A few pages later the book shares some additional insights about those who retired by their own choice:

Among those who retired by choice, 69% are satisfied with their retirement lifestyle as compared to only 36% of those forced into retirement. About 55% described themselves as completely adjusted, but only 31% of those pushed into retirement feel that way. Those retiring by choice also report much lower stress and better quality of life and are happier with how they spend their time in comparison to forced retirees.

Retirees who choose to retire are more likely to be self-confident and optimistic about the future, feel connected to the world, and feel productive. They are also much less likely to be taking antidepressant medications than those who felt they were forced to retire.

If you choose to do something on your own you’re probably more excited about it and prepare for it in advance. Both of those things have a huge impact on the success that you then see.

But if you are forced into retirement for whatever reason, all sorts of problems can pop up. On the financial side, the person may not have had the chance to get their finances in order prior to retirement and now have a standard of living far below what they wanted or expected. On the life side, they likely had less time to plan what they would do with their time and are now struggling to fill it in a productive manner. It’s a total losing proposition in both key areas of retirement.

This is an argument for FI as soon as possible IMO. Even if you choose not to retire, why not work on being financially independent early in life? Then if something happens and you’re forced into retirement you are at least prepared for it financially.

This also argues for developing interests in your life for the same reason — if you are forced to quit work you then have plenty of enjoyable things to do that will fill your time.

And a few more findings to round out this section:

Forced retirees also have much lower annual income — $48,000 versus about $64,000 for those retiring by choice.

Even when health and income were taken out of the equation, those who retired by choice were happier and better adjusted in retirement and seem to have developed a lifestyle that was much more satisfying and fulfilling as compared to those forced into retirement.

No surprises here for the same reasons noted above.

I guess the learning is that it’s better to take retirement on your own terms than to be forced into it.

Not that that’s completely within your control, but if it is, plan accordingly.

And if it’s not, that’s why you should prepare in advance as if it could happen at any time.

That’s it for this time. To read the next post in this series, see The Retirement Maze, Setting Goals in Retirement.