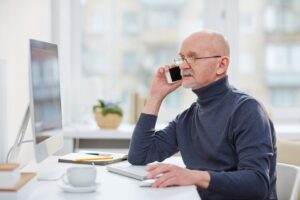 We’ve already covered The Problems with Retirement and How to Define Retirement and Problems Retirees Face in this series, so if you missed those, you may want to go back and read them before reading this post.

We begin with a few of the book’s thoughts on retirement and happiness:

There are bodies of evidence suggesting that retirement can have a positive effect on subjective well-being and some that suggest a negative one or a neutral one (i.e., not much effect at all). Some researchers have found that retirees exhibit poor physical health, more depressive symptoms, lower activity levels, and less positive overall satisfaction and happiness. Others have found retirement to have a positive impact on life satisfaction, physical health, and stress levels.

Retirees in these studies have described themselves as calmer, less competitive, and less argumentative. The absence of work-related stress, according to this body of work, apparently has led to less aggressive behavior, which in turn has led to more positive social interactions. Finally, other research studies suggest that retirement is a benign event with no or only a minimal apparent impact on one’s health and well-being.

Anyway, here’s how the book reconciles the differences findings among studies:

It may be tempting, in light of these inconsistent findings, to dismiss the work of these social scientists as misguided or wrongheaded, but that would be a serious mistake. The fact that some studies show positive and some show negative outcomes simply reflects reality: we don’t live in a linear world, and there are no simple clear-cut solutions that apply to all retirees.

What we need is some sort of perspective. For instance, instead of saying “some studies show positive and some show negative outcomes” what if they said “90% of studies show positive and 10% show negative outcomes”? Would that change your perspective? I think it would. And yet they don’t share this with the readers. My cynical side says it’s because the facts wouldn’t support their narrative, but I’m just guessing. But not guessing in the dark…

The book now moves on to one of their main points — retired people need to work.

It will take us some time and many pages to get there, but that’s the bottom line.

But never fear, we’re going to take the long way there — we don’t want to miss anything do we? Hahahaha.

They begin with this:

In truth, even though a job at times may be a hassle, there is a lot of evidence to show that work is an essential component of American society. Researchers have confirmed what many Americans intuitively believe: that the United States is a work-driven culture, that one’s job is a primary source of identity and a means of determining self-worth, and that the status associated with a job can contribute a great deal to one’s subjective well-being.

Through their jobs, people also acquire a sense of purpose — even, for some, a reason for being. The feeling that life has purpose can be especially strong if one’s job requires a variety of skills and the worker feels that his or her performance is valuable to other workers and to the organization. On leaving the workforce, that sense of purpose and the feeling of making valuable contributions can be more limited, and retirees can start to think that they no longer play an important role in society. The loss of that role and the attendant feeling of being unproductive can adversely affect psychological health, weakening one’s sense of self-worth and limiting the basis of one’s personal identity.

The book marches on:

With their well-defined routines, jobs also add structure to living by making us conform to daily schedules. Social scientists have demonstrated that the structured use of time can enhance subjective well-being by providing direction to a person’s actions, along with a sense of working toward a goal. When people’s time is not accounted for in a purposeful way, they can feel a lack of direction and a loss of personal control over their lives, and this can lead to a decline in subjective well-being.

Then there are the social benefits of employment. When people are employed, they have a variety of personal contacts and daily opportunities to interact with friends and coworkers. These relationships provide employees with emotional support as well as opportunities for social comparison and feedback about themselves. Along with being an important source of friendship, being in the workforce allows people to bond by sharing common goals. Working towards goals with others provides a sense of membership and acceptance in a group, and being accepted by others helps people maintain their self-esteem. When this opportunity for social contact and group membership is reduced or cut off, as can occur in retirement, people can feel isolated and socially disconnected.

Next we have this statement:

Some retirees dislike their jobs for one reason or another, and for them, employment is not necessarily a better alternative than retirement.

Next they move back to Rob’s story, which we covered in the first two posts on this book.

Rob is one of the authors, a guy who retired at 51 and failed at it miserably because work was the only thing in his life. So when he quit working, his life disintegrated.

He tells the story of what got him to retire in the first place. An employee tried to sue him and he had had enough. He wanted out. Then and there he called his partner and said he was done.

Here’s what happened next:

I set my retirement date for about nine months after that phone call. During that time I made no specific plans about what I would do when I retired. Rather, I just use that time to distance myself from my job and to wind down. As I mentioned before, I had a lot of interests and I believed a general idea about how I would use my time was good enough to make my retirement fulfilling and enjoyable.

I couldn’t have been more wrong. After the first two months or so, the elation of a pressure-free life subsided. At that point I had to scramble to find things to do, and that’s when I started experimenting with a lot of new business opportunities. Because I had no clear direction and no structure to my days, I pretty much had to go back to what I knew — business.

The reality was, even though I thought retirement was a great idea, the fact that I was running away from my job rather than running to something specific in a retirement life left me with very little when I was out of the job and into retirement. I have no regrets about the courses I pursued, but I probably could have saved myself a lot of trouble if I really focused on putting together a structured way of living with some nonbusiness goals set up. Even though I’m big on planning, I just didn’t realize what I needed to do to feel good about being retired.

Oh, Rob, Rob. How you make my blood boil…

Anyway, some thoughts from me:

That’s it for this time. For the next post in this series, see The Retirement Maze, The Four Stages of Retirement.