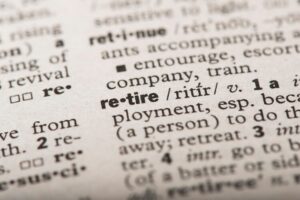 We’ve already covered The Problems with Retirement in this series, so if you missed it, you may want to go back and read it before reading this post.

Here’s a part that I actually liked about the book — its discussion of the definition of retirement.

I generally agree with what they say, contrary to how the retirement police define it.

Here are some highlights from the book:

What exactly does it mean to be retired? How would we best define the very term that our entire project hinged on? In fact, arriving at a good work definition of retirement turned out to be a researcher’s nightmare. The main issue is that many retirees continue to work, often for pay, but they still consider themselves retired. So, to conduct a truly comprehensive study of all retirees, we had to include both those who are working and not working.

This brings us to another problem: how do you differentiate working retirees from nonretirees still in the workforce? We had to make sure we got this right; that we had retirees — working and nonworking — and nonretirees correctly classified, or our data would be useless. This is a very important issue for our research and a problem faced by other social scientists, so we had to come up with a sensible solution.

Social scientists believe that the definition of retirement has blurred, but it may be more accurate to say that the concept of retirement has evolved. Retirement is no longer seen as the complete end of work after a career of full-time jobs; instead, work is now seen as one potential element of the retiree lifestyle. However, there is a very important psychological distinction between employees still in the workforce and retirees who hold jobs. Working retirees tend to be less emotionally invested in their jobs and have more say as to the terms of their employment, such as the types of tests performed or the number of hours worked. Also, retirees think of themselves as retirees. These distinctions — how they look at themselves and their jobs — are keys to coming up with a meaningful definition as to who is a retiree and who is a worker.

In large part, then, retirement is a state of mind — to be retired, one must believe he or she is retired, and that became part of our definition (along with having left their full-time career). Obviously, there are objective components to being retired: things like age and the termination of a long-term career clearly provide clues to someone’s retirement status. But the subjective component, a personal sense or feeling that one is in fact retired, even if they are still working, has to be considered.

Once the book’s authors set a definition of retirement, they then needed to determine how they were going to measure happiness (what they call “subjective well-being“) in retirement.

Here’s how they got there:

And then here’s what they did:

Our nationwide survey was conducted via the Internet among the approximately 1,500 retirees and 400 people who are of the same age and other demographic characteristics as our retirees but still working. We realized that our decision to conduct online interviews may raise a few eyebrows, primarily among other researchers, because of concerns regarding sample representativeness and scientific “control.” These are two elements required in a research project for it to produce meaningful results.

I’m not going to debate whether their survey was “good” or not. They did get input from a large number of people, so if anything their information is at least directionally correct. I can work with that.

What I will have some issue with is their conclusions from that data. We’ll argue those points when we get to them.

For now, let’s end with this final part of the introduction section (or at least what I consider introducing the topic, methodology, etc.) and then we can move on.

In summary, retirement has become a real option for many people, driven by the prospect of improved health and healthcare, greater financial security, and its evolution to include working under circumstances more favorable than a full-time job. But it’s also a movement that may have been forced by changes in corporate employment policies and practices, unspoken as these may be. Nevertheless, one can also speculate that the drive to retire may be tied to a desire to get the most out of our lives. It can be argued that the prosperity of modern times, occasional economic downturns notwithstanding, has given us more freedom to think about living in terms of personal happiness and not just in terms of filling basic needs than might have been the case for people up to the middle of the last century.

But however one gets to retirement — whether forced by job circumstances or chosen because it’s seen as offering a better lifestyle — a surprising number of issues can blindside a retiree, possibly leading to disenchantment down the road.

The book makes the jump here into the meat of its presentation, beginning with this:

When the day of the retirement actually arrives, most retirees tend to start out on a positive note. They are likely to feel a sense of freedom and a respite from day-to-day pressures, as though a burden had been lifted from their shoulders. They may feel as though they’ve reclaimed ownership of their life, that time is their own to use however they desire. It is a time to finally catch one’s breath and chill out for a while.

Unfortunately, within a relatively short time, many retirees begin to sense some uneasiness. After the initial sense of relief, sooner or later they begin to realize that there’s more to retirement than the simplistic “stop work, go play.” Although retirement is a relatively pressure-free way of living, and many adults truly look forward to it, studies have found that as many as 33% of retirees have difficulty adjusting to the lifestyle. Furthermore, as we mentioned very early on, even those who claim to enjoy their retirement may not be content 100% of the time. They are instead likely to sense some discomfort from time to time, however short lived, as they adapt to a life without work.

More on a Failed Retirement

We’ll wrap up today’s post by sharing a quote from Rob, one of the author’s of this book.

In the first post, we detailed Rob’s failed retirement and I broke down what I thought went wrong.

Now he adds his own thoughts on why he couldn’t make retirement work:

But thinking back on those days, I now realize that I made a mistake. Despite the fact that I’m big on planning, I didn’t use that time to lay out the specific steps that I would follow in retirement. I was so in love with the idea of having stress free days and being able to do whatever I wanted to do that I didn’t bother to think about what I actually would do when I was no longer working. I had some general ideas but nothing specific.

So after I retired and the joy of having no stress was gone, other problems set in — no structure, nothing meaningful in my life. I felt disconnected, no place to go, no direction, isolated. Then there was the boredom of nothing to do, a boredom that was at a whole different level from what I felt after the many years of doing my job. The emotional issues I dealt with during that time were pretty intense and wholly unexpected and, in retrospect, also very stressful.

We’ll stop here for today and get back at it next time.

For the next post in this series, see The Retirement Maze, Why Work Works.