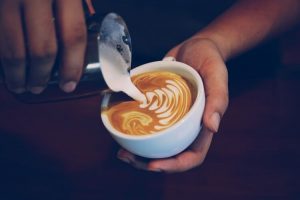 It all started with a simple gift.

We had just moved to Oklahoma and my sister-in-law got us a Keurig machine as a housewarming present.

None of us were really coffee drinkers at that time, but one of us (me) was about to become one. 🙂

The machine came with a wide range of flavored k-cups. We tried them all and over time I found that I actually liked coffee. The kids liked the sugary powdered stuff but once the samples of those ran out we didn’t buy any more. Too much junk in them.

As I began to use the machine more regularly, I would only have one or two cups a day as at that time I preferred my caffeine cold (soda).

During the same time I was given a rule of thumb by my brother-in-law: 50 cents or less on a k-cup was a “good deal”.

Things stayed about the same for a couple years (a cup of coffee or so each day). Then we moved from Oklahoma to Colorado (colder temps call for warm drinks) and I gave up soda. Now I was drinking two cups of coffee a day every day — one at home and one at work.

My knowledge of coffee was about zero then (it’s still not great), but that was about to change.

As I transitioned into my new job, I befriended several people at work who regularly went to coffee shops for breaks during the day. Every so I often tagged along and got something. As time went on I also ran into people in the office who brought their own coffee to work and made it there. There were even some who roasted their own beans. As I began to ask questions I discovered that coffee was way more than putting some grounds in a machine and watching it drip out. People were more adamant about their coffee than they were about their religion or their politics. They all had strong opinions on what beans to use, the best way to grind them, the best brewing methods, etc. Everyone had their own process and theories and as you might imagine, they often contradicted each other.

I was still mostly using my Keurig machine until the last few weeks at work — when things were winding down. I needed more than just a couple cups to get me through each day. It was during this time that a friend sent me a $10 Starbucks gift card as a present. Using it I discovered the Venti Cafe Latte. Oh, and the Starbucks app, of course.

Starbucks Sucks Me In

For those of you who don’t know, the Starbucks app is part of their rewards program. For every dollar you spend you get two stars and after so many stars you get free stuff. They do promotions like “watch a video and earn 10 stars” and “order two drinks this week and get 75 stars” so there are many ways to earn stars. (FYI, they have been THROWING stars at me lately. One promotion was to visit the store four days in a row and get 125 stars. That’s basically “buy four get one free”. Nice.)

You load dollars on your app via credit card and then pay through the app. This is cool, but by far the best thing about the app is that you can use it to order remotely. I would often walk to Starbucks and order my drink on my phone when I was a few minutes away. I would walk in, walk past the 10 people in line waiting to order and the 10 people waiting for their drinks to be made and pick up my drink, which would be sitting on the counter. In short, the app saves a TON of time. Since I’m not a great stand-in-line-and-wait-20-minutes-to-get-a-coffee kind of guy, I LOVED this part of the app.

(here’s my review of the book: The Best Personal Finance Books of All Time: The Automatic Millionaire). It wasn’t that Bach hated coffee (as far as I know), but he used coffee purchases to illustrate the small, often daily spending that sucks money out of our lives. In fact, the entire second chapter of his book is titled “The Latte Factor: Becoming an Automatic Millionaire on Just a Few Dollars a Day.”

Here’s a passage from that chapter:

By coming to understand what I call The Latte Factor, you are now going to change all that. You’re going to become more aware of how much you are wasting on “small things” — and how to redirect that wasted money to help you build a fortune. It doesn’t matter if you earn what you think is a small paycheck. Regardless of how big or small your income is, by making use of The Latte Factor you can start to build real wealth and ultimately more freedom.

Over the past few years, The Latte Factor has become an internationally recognized metaphor for how we dribble away what should be our fortunes on small things without ever really giving it much thought.

He then goes on to use an example from a class where one woman said she didn’t have any small spending to cut. He took her through her day and identified her spending as follows (FYI, this was a long time ago, so prices are higher now):

Then he does the following math:

Now of course he isn’t just talking about coffee. The small spending could be anything: cigarettes, bottled water, soft drinks, candy bars, fast food, and on and on. The idea is that the small things add up.

At this point you may be like my daughter and say, “Let me live my life!” (meaning: “Let me enjoy what I want to enjoy!”) Rest assured that I’m not limiting you on anything, I’m just explaining at this point. I’ll get to the tough stuff in a bit. 🙂

That said, I do agree that small spending can add up, so we all need to be aware of it (by tracking spending with a budget or some other process — I use Quicken) and make informed decisions accordingly. Once you know what you’re spending, you can decide where to spend a bit more and where you are ok to cut back. I call this moderate and selective frugality and the items picked to spend will be different for us all based on our desires.

Now I was all ready to retire and I could afford this, but I still got to thinking: this sort of habit could really add up for someone.

Then I thought of my friends at work who went to Starbuck two or three times a day. I knew they made one-third of what I did. How were they affording this? And it wasn’t just them. Starbucks was almost always packed both inside as well as had a line of cars in the drive through. How was America affording this?

Being the curious numbers guy that I am, I wanted to see just how big a deal this was. So I ran some scenarios. Here’s what it costs under different situations for that coffee fix:

Before you say no one spends $18.40 a day on coffee, consider this is what a family spends if the husband and wife each have only two coffees a day.

My numbers differ from Bach’s for two main reasons:

That said, the conclusion is the same: a lot of money can flow out of your life in small amounts here and there.

So not to be one to spend $500k on coffee, I decided to join my snobbish coffee friends and develop my own, blend, process, brewing method suited to my personal palate. I’m still working out the kinks, but here’s what I’ve done so far:

I also found a couple pieces on saving money at Starbucks with several tips I want to employ. Check out 10 Best and Worst Deals at Starbucks and Starbucks Rewards boost: More. Free. Coffee. for details.

I know. I took the long way around to get to the point.

The point is that small amounts of spending here and there can really add up. We all need to watch them and be on our guard or else we could easily be throwing away a few hundred thousand dollars.

What areas do you have where you spend small amounts on a regular basis?