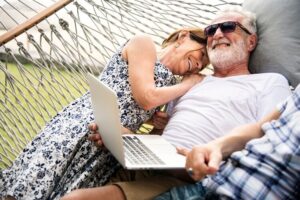 Here’s a new study out about older Americans, lifestyles, retirement, and such.

Edward Jones and Age Wave initially joined forces in 2019 to explore people’s hopes, dreams, and concerns in retirement. Together with The Harris Poll, we conducted a groundbreaking study of more than 9,000 people across North America to understand more deeply what it means to live well in retirement.

As many of you know, I’m well ahead on my posts (several months ahead in fact), but I wanted to get this information out sooner than next January, so I’m going to be doing a special Saturday series on it. I’ll share some highlights from the study and express my thoughts on their findings. If you’d like to know more, you can then read the study for yourself.

Let’s begin with some summary/overview points from the study:

As we transition into the beginning of the study’s findings, we approach the age-old question of “purpose” in retirement.

Here’s what the study has to say:

People find their sense of purpose in such a variety of ways that no individual preparation actions stand out. The most common are exploring new activities, volunteering and giving back to one’s community, and improving skills with technology, which helps retirees stay informed, connected, and entertained—and provides access to services including telemedicine. Since choices vary widely, the important thing is to be taking some actions to prepare for having purpose in retirement.

Retirees reporting higher quality of life are more likely to have taken each of the purpose preparation actions, including 40% who explored new pastimes, hobbies, or interests. More significantly, their sense of purpose is reflected in their active lifestyles in retirement. They are more likely than the average retiree to say they are spending quality time with family and friends, engaging in creative projects, and volunteering, mentoring, or helping others. And almost all (87%) say they are able to realize many of their hopes and dreams in retirement.

That was a short statement, but there’s a lot to respond to:

Take a look at this chart:

There is a HUGE gap between what retirees say is important and what pre-retirees think is important.

The result is that pre-retirees are not working on the most important things to having a great retirement — something that could cost them dearly when they retire.

Basically the important stuff boils down to money, health, activities, and social/relationships — a very similar list to my five categories in Huge List of Awesome Retirement Activities.

At this point the study makes some general conclusions from what it’s shared so far:

My thoughts on these points:

Next we have some advice retirees would give to those coming behind them:

Ok, that’s it for this time. I’ll revisit this study in future posts, sharing their thoughts and mine, so stay tuned.