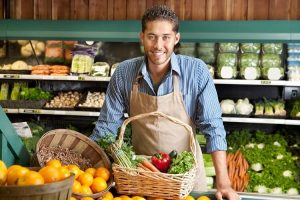 I’ve talked a lot about managing your career, so I thought it would be interesting (maybe, maybe not, you decide) for me to detail the jobs I’ve held in my lifetime, what I gained from each of them, what I learned, how I grew my income, etc.

I’ll be doing this over a series of posts that will last a several months (I’ll space them out). We’ll see how it goes.

My first official job was as a grocery store carry-out boy. I worked at the local grocery store in our small town for several years. It started as a summer job, then I worked 15 hours or so during the next school year.

In the following summers it bumped up to 30 to 40 hours a week (the regular guys took vacation) and in my senior year of high school, when my class load was lighter, I worked about 30 hours a week.

I stocked shelves, sorted cans (no machines back then, so beer and pop bottles and cans returned for deposit were sorted by hand — it was a huge, ugly mess) and, of course, bagged and carried out groceries.

I learned several things from this job including:

Beans of All Things

My second pre-college job was for one (very long) summer that I did in addition to working at the store. I “walked beans.” For those of you who are unfamiliar with this horror of a job, here’s what it entails:

Don’t ask me how I got roped into this job, but let’s say I was naive and didn’t get the full details before I agreed to do it. This was the biggest lesson I learned in this position.

Thank goodness I only did it for a month or so.

To read the next post in this series, see My Jobs, College.