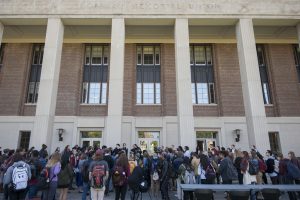 Just when you thought filing your taxes was the most complicated thing you’d have to figure out financially, along comes a problem like this.

Let’s start at the beginning…

There are a couple of things you don’t know when saving for college:

My wife and I answered these questions many years ago as follows:

Given these answers we saved for college in two ways:

Over the course of time the savings grew until we ended up with the following:

For background, you can read how we saved in each of our kids’ college accounts as well as our “keep what you don’t spend” incentive.

We Saved Too Much Based on Reality

The problem is, we answered the two questions above incorrectly:

So she’ll enter college on-campus next fall as a junior and have two years at an all-in cost of $34k per year. She also hopes to be part of a summer internship which she’ll get credit for at a rough cost of $15k. That means her two years will cost $83k, $7k less than what we have saved for her.

BTW, for the rest of the article don’t worry about what we pay for versus what she pays for from her college fund. At this point we simply want to get all the money we can out of the college funds with no penalties. We’ll settle on what we owe her at the end out of other funds if need be.

Getting the College Money Out

The issue with my son is a longer term one, so this post will deal with how to pay for my daughter’s college, specifically how can I get all the money we have saved out of the accounts without incurring a penalty. You see if you withdraw money from 529s or Coverdells for amounts over the qualified college expenses, you pay a 10% penalty on the earnings withdrawn. And before you get any bright ideas, you have to take out money earned on your contributions and the money you contributed in equal amounts (based on the percentage of each in the account).

The good news is that you can take out dollars equivalent to scholarships the student receives. My daughter is probably going to get $10k per year in non-need based scholarship money.

If you have extra funds left in accounts you don’t have to withdraw them and take the penalty. According to Saving for College you can:

Before we get into specifics, let’s review some advice from my accountant. As I noted in Big Tax Savings due to Early Retirement, I sent an early December email to my CPA asking about tax planning issues for 2017.

I asked my CPA for some guidance in an email as follows:

Hi, Wendy. I hope this email finds you well.

My daughter is a senior in high school and homeschooled. She has taken college classes online as part of her dual enrollment (getting both high school and college credit). I have a 529 for her as well as a Coverdell ESA. I’m wondering:

1. Can I withdraw money from either of the accounts for her college expenses in 2016?

2. If so, does it matter which account I take from first?

3. And what is covered? Both tuition and books?

Anything else I need to think of? For instance, should I take money out with the check made out to her or to me? Or does it matter?

I think that’s it for now. Let me know if you have questions and I’ll get back to you asap.

You can withdraw money from either account for the college expenses. It doesn’t matter which account you use first.

You can take money out to cover tuition, books, and room and board expenses provided your daughter is enrolled at least half time.

It doesn’t matter who the check is made out to. As another option, you can have it sent directly to the college.

You cannot take money out now to cover the previous years’ expenses…you are right, that window is closed.

Let me know if you have additional questions.

Some thoughts on this response:

Now let’s go through the specific situation. Here’s where we stand money-wise:

Now, let’s say we incur the following expenses throughout my daughter’s college career:

Now, how do we pay these costs to maximize the amount we can take out?

The Path to Withdrawing College Savings

In the tax email to my CPA she noted that we could qualify for a college tax credit, but according to this site, that money needs to be paid from other funds. Their quote:

Under the American Opportunity Tax Credit, for example, taxpayers can deduct 100 percent of the first $2,000 and 25 percent of the next $2,000 spent on qualifying education expenses from their tax bill.

But that money can’t come from a tax-qualified distribution from a 529 plan. So the best way to benefit from both the credit and the distribution is to pay the first $4,000 of annual expenses from a checking or savings account, and then take the remaining amount needed from the 529 plan.

Given everything we’ve discussed so far, here’s my thinking on how to pay for my daughter’s education:

How to Handle What’s Left in the 529s

My understanding is that I can take the $20k out without taxes or penalty. That is money we contributed post tax and is ours. Whether I can do that without tapping into the $8k I do not know.

Or I could leave the money where it is (even roll it into my son’s 529 plan) and hold it indefinitely — perhaps for our grandchildren.

Same goes with my son’s 529. I could pull it out, pay taxes, and penalties, or leave it be.

As you can see, things are fairly complicated. Who knew saving too much would be such a problem?

I’m still working through these issues (as you can probably tell) and may be for the next several years. For now I’d appreciate your thoughts on what I should do, errors in the law I may have made, and so forth.