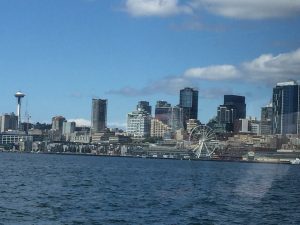 One of the things I want to do in retirement is to travel a bit.

I don’t want to live out of a suitcase or to be gone for a couple months at a time (I like my routines at home too much for that) but there are some places I want to visit.

As I do get out and see the world I’ll be sharing my experiences with you — what we did, how we liked it, the costs, tips, etc.

We haven’t traveled much so far during retirement but that’s about to change — some trips are coming up so be ready!

For today, we’ll begin with a fun trip I took this spring.

And BTW, all the photos in this post are mine.

Senior Trip to Seattle and Portland

We started a tradition when my son graduated high school.

We would pay for the kids to take a senior trip to wherever they wanted to go (within reason) as part of their graduation present (we also give them cash).

My son chose to go back to Michigan to see his friends and spent a week causing all sorts of trouble in our old home state.

My daughter graduated this year and wanted to go to Seattle. She likes the cloudy/rainy days that Seattle often has (they remind her of Michigan) and thinks she might like to live there one day. And while we were so close, she wanted to check out Portland as well.

I was selected as her guide (no one had to twist my arm) and the planning began this past spring.

Before you knew it, she had graduated and we were off to Seattle.

Getting to Seattle and Our Accommodations

Our trip was set as follows:

The first thing we secured were our flights. After looking at all the options we got what I thought was a decent deal — $165 round trip tickets each on Delta. We each had one personal item (backpack) and carry on item (small suitcase) so we avoided any baggage fees.

When I looked at places to stay, I started by looking at Hilton hotels. I have been a Hilton Honors member for years and like their hotels (unfortunately I have allocated all my points for a room during my daughter’s college drop-off.) 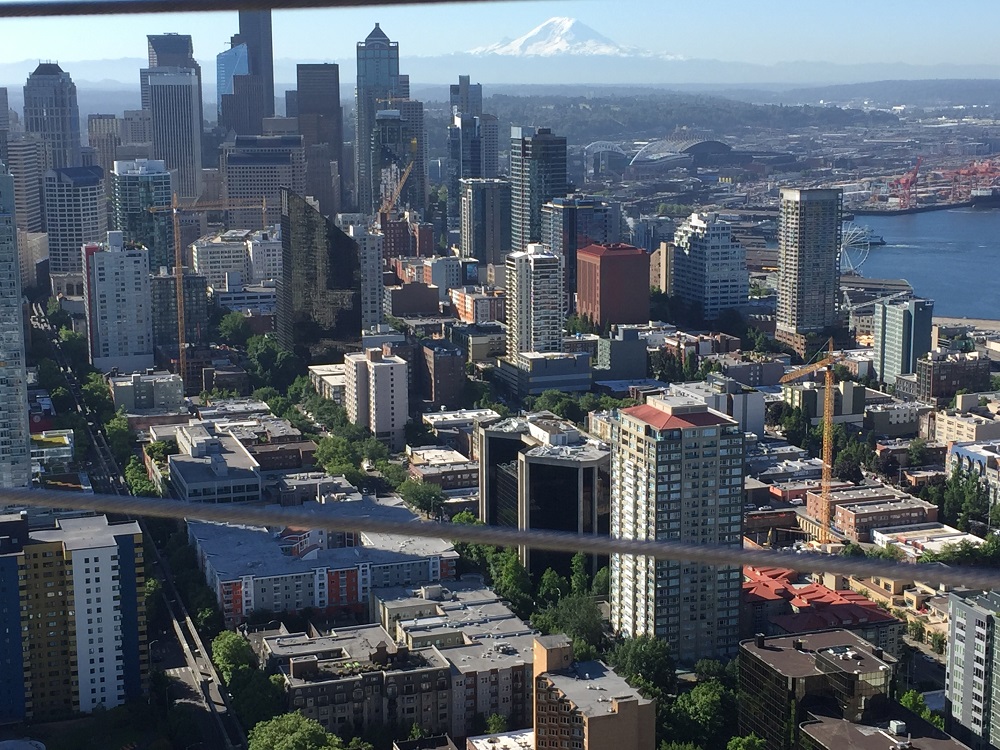 View of Seattle from Space Needle. Look at all the construction — Seattle has a building boom! Mt. Ranier in far background.

Non-Hilton hotel chains had the same costs. What did I expect any way when going during the height of tourist season?

So I went a different route and began to look for options on Homeaway, VRBO, etc.

We eventually found this one bedroom apartment on Homeaway (the color scheme wasn’t what’s pictured but it was similar). It was just over $300 per night (all fees included) but was MUCH nicer than a hotel. Plus since we were in the heart of everything, we skipped the need for a rental car while in Seattle.

We booked it and were set to go. 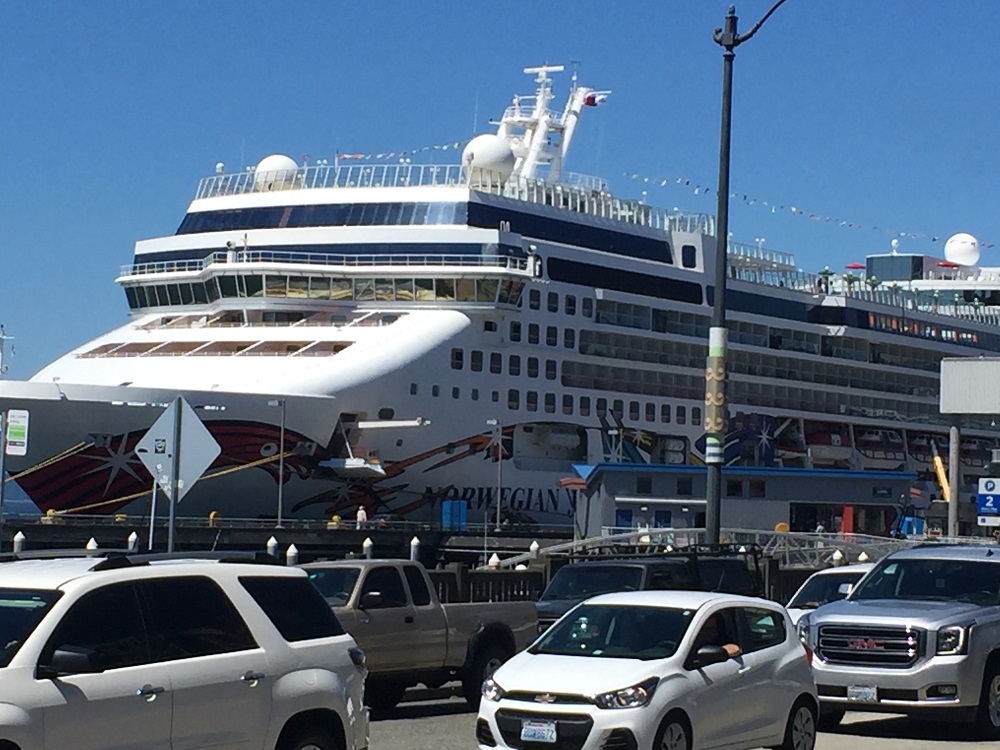 Norwegian Jewel in Seattle harbor. We’ve been on the Jewel (to the Caribbean) and loved it!!!

We did a lot of research before we went to help us decide what we wanted to see.

I have been to Seattle a few times, plus we got some travel books from the library, searched the web, and emailed a few friends who lived or had lived in Seattle.

From there we narrowed down our list to the things we were most excited about.

Since many of the places on our list were included, we bought two Seattle City Passes and then planned some additional visits as well.

Let me say that the flights are always my least-favorite part of any trip. Oh for the old days when air travel was at least somewhat of a “treat”.

We flew out of Denver and when we arrived, the airport was packed. The flight next to us was over-booked by 20 people! Twenty people!!! How does that happen?

The airline offered $600 vouchers for people to volunteer to take a later flight but it looked like they weren’t getting many volunteers. Our gate was changed so we moved and never did see how it played out.

Our flight was packed as well, but everyone got on. Then they came on the intercom and said we had weight restrictions because of the temperature (hot) and altitude. They needed five people to get off.

They offered $1,000 vouchers and within a minute there were enough volunteers. I would have considered it if we weren’t on an early evening flight (I didn’t want to risk spending the night in Denver).

The flight was fine. Seattle was nice and cool (60 degrees) after the hot 90 degrees in Denver.

We took a cab to our place downtown, tossed our bags in the room, and set out to see what was going on. It was already 8:30 pm so things were getting quiet.

We were hungry and hit a local pizza place for dinner, then walked back home, unpacked, and got ready for the next few days. 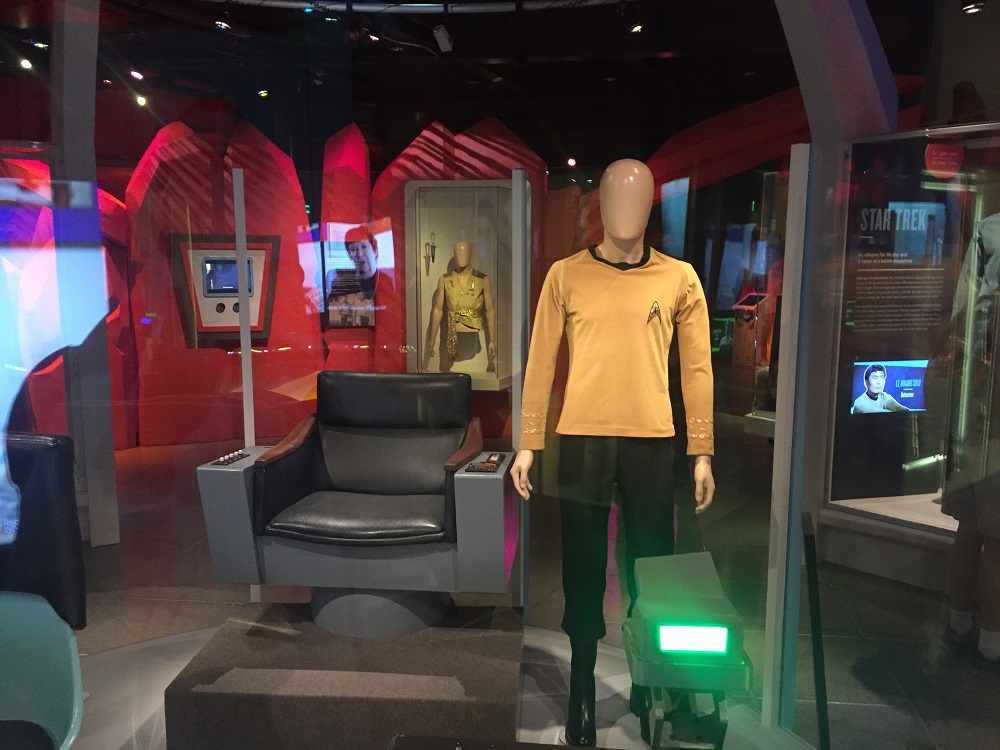 Instead of giving you a day-by-day listing of what we did, I’m simply going to list all the things we saw over the course of five days. I’ll give my thoughts on them as well. Here goes: 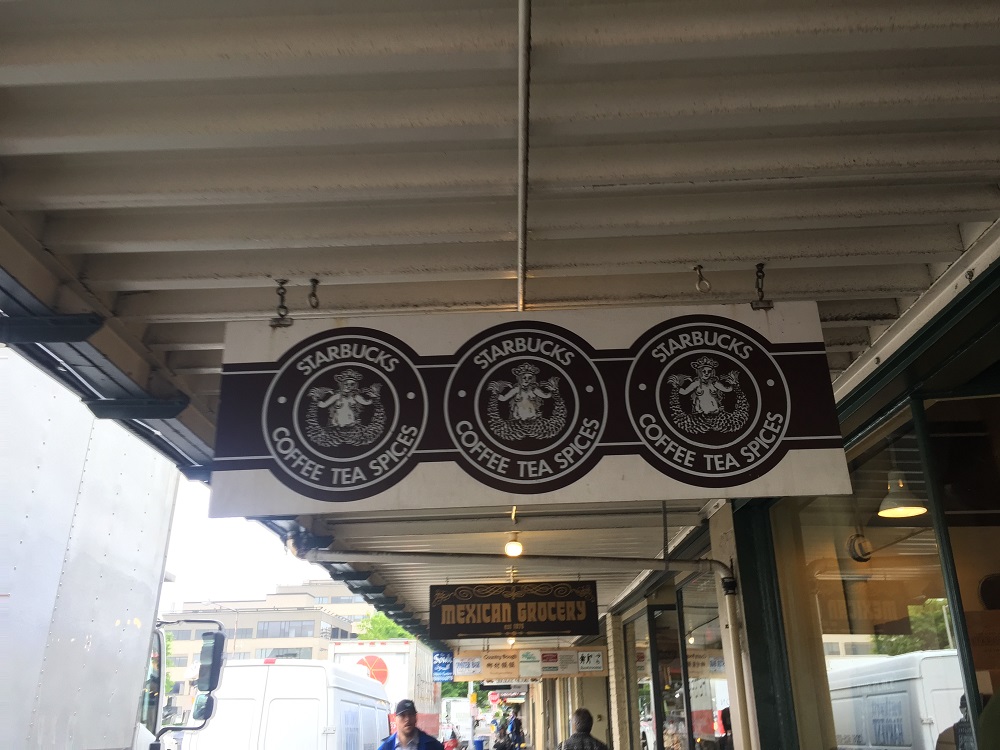 The original Starbucks at Pike Place Market. We didn’t go in because it was too swamped, but there’s a Starbucks on almost every corner so getting coffee was no problem.

In addition to these more touristy places, we hit tons of other spots including: 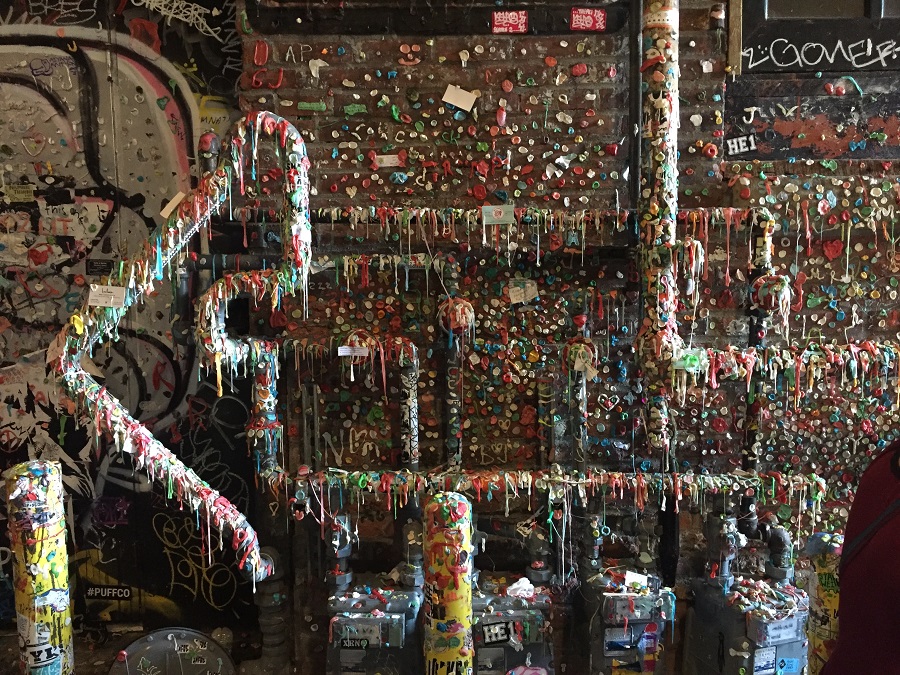 Just a very small part of the Seattle gum wall. Rumor has it that people used to stick their gum on the wall when entering the theater since the theater didn’t allow gum. Then soon, everyone was doing it!

Here are some places we considered going but eventually passed on:

By the way, we happened to hit a sunny/hot several days in Seattle. I loved it but my daughter wanted the cool, rainy weather she’d heard so much about. 🙂 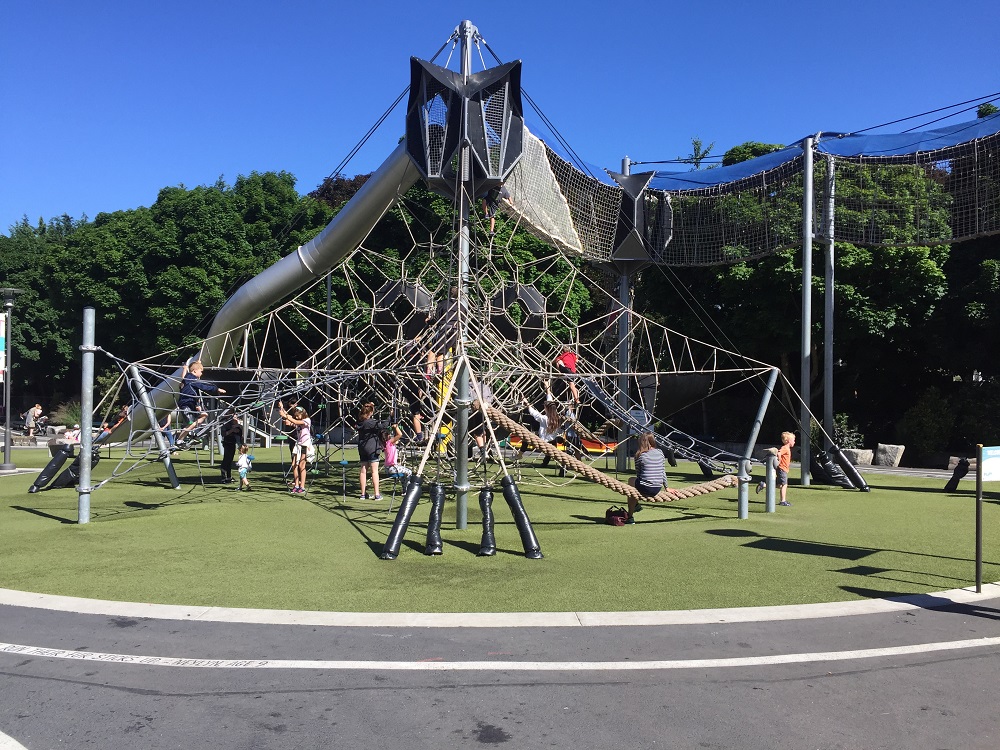 Playground outside the Museum of Pop Culture.

On Sunday morning we took a cab to the airport, got a car, and drove to Portland. It was 103 degrees there when we arrived in the late afternoon.

We stayed at The Duniway Hotel, a swanky Hilton property that I splurged for since we were there for only two nights and wanted to be where the action was.

Turns out Portland doesn’t have much action — at least not compared to Seattle.

It was much smaller than Seattle and had much less going on, though the homeless population seemed larger.

We spent most of our time shopping the day and a half we were in Portland. Some highlights: Nike, Neiman Marcus, Powell’s Books (a monster of a store), downtown mall, and the candy store.

We walked the entire downtown what seemed like several times.

On Monday we had lunch with JD Roth from Money Boss and my daughter tolerated us while we chatted about money and blogging. 🙂

We watched two movies at the hotel (one each night — Lego Batman and Get Out) in our room on a nice 60-inch TV they had just installed. 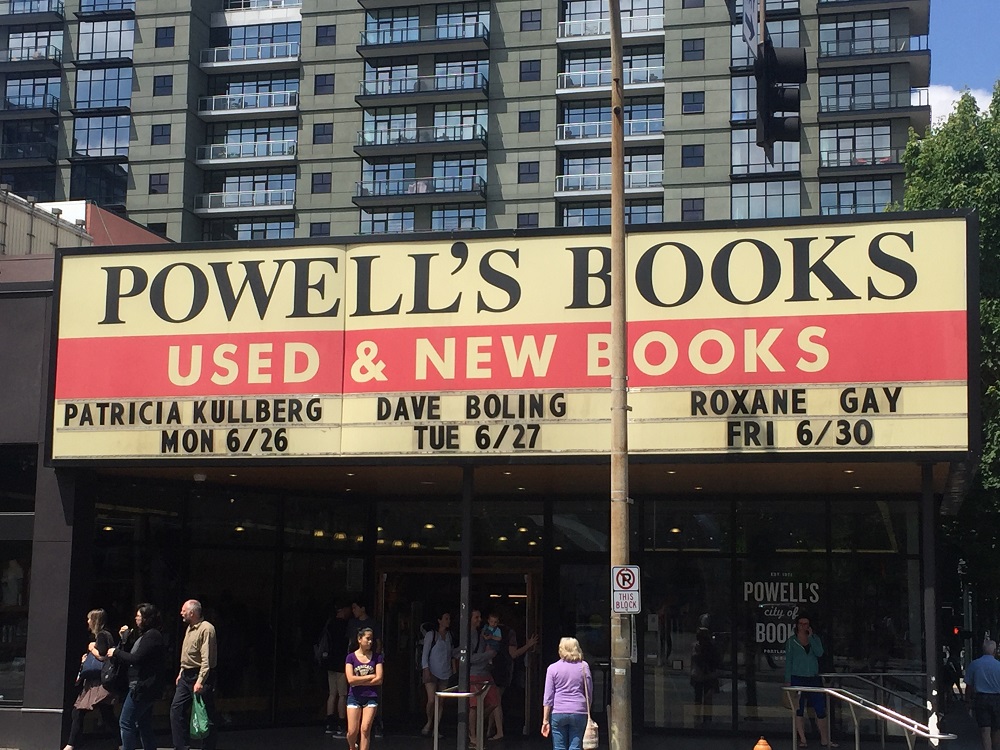 Tuesday we got back in the car, drove to the Seattle airport, and caught a flight home.

We were offered $600 to wait for the next flight which seems to happen on almost every flight these days. I wonder if you could make money buying $250 tickets and cashing them in for $600 to $1,000 vouchers.

We arrived in Denver around 5 pm and my wife picked us up.

We were exhausted but had a blast.

Any thoughts from you more-experienced travelers on Seattle or Portland?