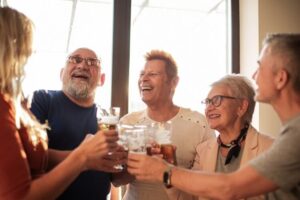 Chapter 8 begins with this short but clear statement:

Social connection is crucial to survival.

We’ve been over this time and time again, so this thought is not new to ESI Money readers.

So let’s move on to the social habits of the happiest retirees. They are:

From here, the book goes on and on into greater detail about each of the items listed above and how having great social connections is vital to being a happy retiree.

I won’t share all of those or this post would be many pages long, but I will highlight a few things starting with this:

A recent study conducted by the health insurer Cigna confirmed an epidemic of widespread loneliness, with nearly half of Americans reporting they feel alone, isolated, or left out at least some of the time.” Douglas Nemecek, MD, Cigna’s chief medical officer for behavioral health, went so far as to say that “loneliness has the same impact on mortality as smoking fifteen cigarettes a day, making it even more dangerous than obesity.”

I have never smoked and likewise try to avoid activities that are as bad as smoking.

Next, there’s this interesting stat:

As a culture, we used to have more friends. According to my friend Dan Buettner, Americans had an average of three close friends in the 1980s. Today, with the prevalence of social media and digital “friends” (read: Facebook friends) and more people moving to the suburbs, Dan says that number has dropped to an average of 1.7.

They must mean pure “friends”, right? Certainly they can’t be including family members here, right?

So what they are saying is that people have half the friends they had a few decades ago. That’s a big drop.

Also worth noting — if you are at 1.7 friends, you are setting yourself up for a possible unhappy retirement.

Finally, we’ll wrap up the social habits section with this:

Even if you don’t love your job — and if you’re like four out of five Americans, you definitely don’t — seeing coworkers every day can be an easy, low-stakes way to maintain friendships. Or at the very least to have acquaintances. There’s a certain level of built-in social inertia that comes with the daily grind. As much as we may hate going to work, studies have shown that disconnecting from that office environment can lead to depression, anxiety, and other health problems.

It is my professional opinion, backed up by data, that after you retire, your network shrinks and you have fewer soft target opportunities to interact with people.

This is how retiring can impact your social life negatively more than almost anything. If all your “friends” (are they really friends or co-workers?) are from work and then you quit work…you are suddenly left without any friends.

It’s the same issue people have with their activities and identities. If all your activities are work-related and your identity is tied to work, all those go away when you retire — and you’re left in a very bad spot.

The answer to this potential problem is that before you retire you need to GET A LIFE. Yes, GET A LIFE!

If your friends, activities, identity, and everything else is tied up in work and work alone, you need to make some changes. Find friends outside work. Create some non-work activities. And begin to separate who you are (as a person) from what you do (as work). If you do these things in advance of retiring, your odds of having a great retirement improve dramatically.

Health Habits of the Happiest Retirees

Next the book talks about what happy retirees do health-wise, summarizing their activities with the following:

I’ll share a few more comments from this chapter but as you can imagine, it’s a long (and important) one.

Let’s begin with this:

Being active is vitally important and that’s not an idle word choice, If you want to stay vital, a word that shares a Latin root with the word alive, you must incorporate some kind of exercise into your life.

The happiest retirees are active. They make exercise a staple of their weekly schedule, if not their daily routine. HROBs love the ings, high-impact activities such as: Walking, hiking, biking, jogging, running, and swimming.

Then there are the racquet sports, tennis and badminton. I’m not exaggerating when I say these sports might unlock the secrets of the death-defying Galapagos tortoise. A Danish study followed more than 8,000 people over a period of 25 years to determine which physical activities most affected longevity when compared to a sedentary lifestyle. What they found was remarkable: tennis added 9.7 years to life expectancy. Badminton tacked on 6.2 years. The runners-up were soccer (4.7 years), cycling (3.7), swimming (3.4), jogging (3.2), and calisthenics (3.1).

Why is tennis so good for you? The researchers aren’t sure, but they have a couple of theories. First, tennis and other racquet sports are a form of interval training, which means they consist of short bursts of high-intensity activity as opposed to a protracted period of steady exertion.

Second—and perhaps more significant—racquet sports require two or more people. As a result, these games foster regular social interaction that, as we saw in the last chapter, is proven to support the mental and physical health of older people. A long solo bike ride is healthy. A shorter weekly bike ride with a group might be healthier.

Other than tennis, what sport is associated with retirement?

You got it — and here are the author’s thoughts:

The catch-22 is that golf is one of those things that gets a lot more difficult to start the longer you wait. If you’ve never cooked a day in your life, you could still become a phenomenal chef starting at age 70, 80, or 90. When it comes to mastery in the kitchen, age is irrelevant. Golf, on the other hand, is different. It’s a lot easier to pick up golf as a 10-year-old than as a 70-year-old.

Long story short: starting golf at an older age is not impossible. But if you’re thinking of picking up a club, do it soon, because it gets more difficult the longer you wait. Golf checks multiple boxes at once: it’s a core pursuit, a physical activity, and a way to be social.

Hahaha. This is my problem — I think it’s too late to take up golf.

Besides, even in retirement, I’m not sure I want an activity that takes up 4+ hours to do.

Here’s the summary of all this:

There’s not really a wrong way to be active. In my mid-forties, I’m constantly coaching my kids in various sports or chasing them around the house. My wife and I try to ing whenever we can, even when all we have time for is walking the dogs. And I’ve always got my clubs in the back of my car.

Basically, get out there and move in your preferred way.

And if you select something that also adds in a bit of social activity — then all the better!

Here’s a boost for dog lovers out there:

Anyone who has a dog can attest that they’re good for you. A recent Time magazine article published the facts and figures to back it up. Studies have shown that dogs can lead to lower levels of stress; they’ve also been found to decrease the risk of asthma in children and have been linked to lower blood pressure.

Perhaps best of all, dog owners are more active than your average person. As opposed to sitting on the couch, trying to summon your better angels, and forcing yourself to take a walk, you suddenly have an urgent reminder in the form of a lovable furball staring up at you with his leash in his mouth. Who can say no to that?

If you want a surefire way to be more active, have more fun, and make a lifelong friend, consider getting a dog. Your local shelter is full of animals who are looking for their forever home.

Well, that’s it for this time. For the next post in this series, see What the Happiest Retirees Know: Home Habits.