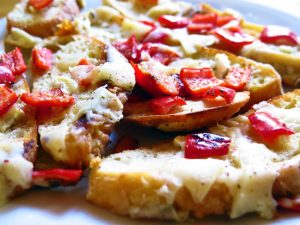 In late November I went back to my hometown to attend my Aunt’s funeral.

I stayed with my parents and while there my mom informed me that she had just ordered a package of three meals from Blue Apron.

Upon hearing the details I was immediately skeptical (especially regarding the price), but I decided to wait it out and see what happened.

The next day, the package arrived and mom and I unwrapped it together.

She had ordered three meals — one with steak, one with chicken, one with eggs.

We unpacked everything bit by bit. It was nicely wrapped, nothing was broken, and all the ingredients appeared fresh. She also got three recipes telling how to make these dishes.

After we unpacked everything my first thought was, “Is this it?” The amount of food seemed like something my wife and I would eat in a meal and a half or two meals — certainly not three meals. The portions seemed way too small.

After I left my mom did make two of the meals and said they were “ok”. My dad is more of a meat and potatoes guy and Blue Apron seems to specialize in fancier fare. She said that the recipes took more time than Blue Apron had estimated and more time than what she’d normally spend because they were quite complicated.

They still hadn’t eaten the egg dish for one reason — there was no meat in it! I’m not sure why she even ordered it.

We talked about it and I reiterated how it seemed like a bad deal financially to me (my dad and I had joked about this when I was home). She cancelled any future deliveries and we moved on.

Meal Kit in the News

A few weeks later I saw a piece on Facebook (can’t remember if it was an ad or a friend had posted it.) It was a CBS news story comparing the cost of meal prep kits (as they called them) to buying food at the grocery store. They looked at Blue Apron, Chef’d, Hello Fresh and Home Chef. Their key findings:

Chef’d offered the most variety including recipes from the American Diabetes Association and Weight Watchers.

The store was also cheaper compared to Hello Fresh, which cost $69 dollars for the box of six entrees. But the store was $61, $8 less.

There were savings with both Home Chef and Blue Apron. Four entrees, including delivery, were $50 at Home Chef. The store was $57. A $7 savings buying the meal kit.

Six entrees from Blue Apron cost $60. At the store, ingredients were $65-dollars. $5 dollars in savings with Blue Apron.

No matter which one you use – if you keep the price per meal to $10 or less – it’s likely buying the kit will be less expensive than buying all of those ingredients at the store.

Wow. As I type I realize this is yet another example of someone in the media doing a story on something they know nothing about. I’m putting it into my “not experts” category for sure. Have these people ever planned and shopped for a meal? $10 is a good price per meal? Remember that later as math will prove they know little about the topic.

But we’ll get to the pricing issue in a minute.

Not How You Plan and Shop

The flaw with the CBS story was that they let the box kit providers set the menu. Then they went out and bought the exact items with two major price disadvantages for the grocery store:

In addition, most people don’t plan meals this way (at least people who don’t want to spend a fortune on food). They think about what they want/like, then look at ads to see what they can get for a decent price. And this is what they buy.

Even with these disadvantages, the store won two out of four times. This alone should give a big hint that these kits are way over-priced.

But as I said, we’ll get to pricing in a minute.

Even with the CBS piece the issue was out of my mind until I saw a Blue Apron marketing page (this one was an ad on Facebook for sure) where they claimed, “Research shows that shopping at the grocery store is 70% more expensive than Blue Apron.”

At this point, I hadn’t run the numbers but simple math, gut instinct, an awareness of how pricing works, and knowledge of what things cost said Blue Apron was way more expensive than buying at the grocery store.

Here are some highlights from the article/marketing piece:

Is this convenience more cost-effective than grocery shopping in the long-run? The answer is yes, according to a study we conducted with Nielsen.

We worked extensively with researchers at Nielsen to determine how much Blue Apron customers spend (or in this case, save!) in comparison to shopping at the grocery store. Here’s what we discovered: On average you save $40 per week with Blue Apron.

Uh, no. No way!!! I knew there was a catch in here somewhere and I didn’t have to read much more to find it:

Here’s how the study was conducted: We recreated 12 weeks of Blue Apron recipes (2-person plan) using the Nielsen database national average prices from traditional grocery stores. While the price of Blue Apron was consistent week after week ($59.94/week for 3 meals), the average cart of groceries for three meals serving two people each was $103.07. Grocery prices for each week fluctuated but were on average 70% more expensive than Blue Apron.

In general, specialty condiments you wouldn’t necessarily use on a regular basis (think capers and spices) can be pricey or difficult to track down, not to mention they often go unused for months, taking up space in your pantry or fridge (hello, giant bunch of cilantro of which you only used a pinch!). This brings up another advantage Blue Apron has over the grocery store: less food waste.

By using Blue Apron, you’re not just paying for convenience and incredible meals; you’re actually saving more money than you would shopping for groceries and reducing your food waste in the process—in other words, a true win-win!

In this case, Blue Apron gave the stores four disadvantages:

So if you tilt the table as far as you can in one way, sure the other option looks better. But facts have a way of ruining a party.

Let’s just consider a few facts and some basic math:

Well, look at the numbers. $43k per year for a family of four is out of control. But that could be considered an unfair comparison since Blue Apron is more of a meal replacement for lunch and supper (not breakfast).

If we only take SUPPER alone, the annual cost of Blue Apron for four people is over $14k! That doesn’t include any spending for breakfast, lunch, snacks, eating out, etc. Yikes!

I looked at Quicken and here are the annual costs we had the past three years for four people (grocery purchases plus eating out):

They are all well below $14k. And remember, the $14k includes only supper meals. So it’s probably more like $20k when you add in other meals and eating out.

And I guarantee you that I got way more food (in weight) for my money than what $14k at Blue Apron would buy me!

In other words, Blue Apron is AT LEAST TWICE AS EXPENSIVE as the combination of shopping at the grocery store and eating out. If you compared it to shopping at the grocery store alone, it would be even more expensive (as we all know eating out costs more than eating at home)! And if you did it on a food-weight basis, it would get even more expensive.

BTW, when we eat out, the four of us spend anywhere from $25 at Taco Bell to $50 at Olive Garden and the like (yes, we use coupons). That means Blue Apron’s costs of $40 a meal for us (assuming the amount of food is the same — which it is not) is about the cost of eating out. Now, just on a basic gut check level, do you think eating out is pricier than buying food from the grocery store?

Other Data Says It’s Expensive Too

That’s just the information from my household. What does the USDA say about food costs? Here’s their chart of annual food costs at home (i.e. food bought at a grocery store and prepared at home) at four different income levels (family of four with two kids — I used monthly costs and annualized them):

These numbers do assume that all food is purchased and eaten at home (no eating out). So we’re in the middle of the pack (especially considering our kids are older and eat more than the kids used in this example).

It also shows that Blue Apron, which is $14k+ for ONE MEAL a day only, is way over-priced, even on a liberal food-spending plan.

There’s no denying that Blue Apron has some advantages such as:

But there are disadvantages as well:

But the biggest disadvantage is cost. It costs SUBSTANTIALLY MORE than shopping at the grocery store. It’s more comparable to eating out.

The fact that they try to skew the numbers and say they are less expensive than the grocery store is disingenuous at best. On that basis alone I will never order from them.

So what’s the alternative? If you want to eat at home, buy your meals at the grocery store. You can save time and money if you work your shopping in to one big trip a week or so. And heaven knows there are more than enough easy recipes out there to keep your cooking fresh for years. You can then supplement this with occasional restaurant visits as you like. The combination of these two will be well below the cost of Blue Apron.

What’s your take on meal prep kits? Do you use them? Why or why not?