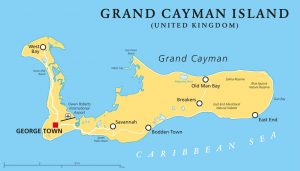 Today I’m going to wrap up the details on our recent trip to Grand Cayman.

In case you’ve missed any part of this series, you can start with Grand Cayman Trip and Tips, Part 1.

As you’ll see, we shifted into cruise control and simply relaxed our last couple of days.

Now, let’s continue on with our journey…

I was wakened at 6 am today by the house alarm next door going off. It sounded for 10 minutes or so and then quit. It went off a time or two throughout the day as well but it appeared that nothing bad was happening over there.

I went back to sleep and got up at 8:30 am. We watched some TV then went for our longest beach walk yet — we left at 11 am and got back at 1 pm. It was so pleasant just to do this — walking in that environment was very peaceful and beautiful.

We ate lunch and played some cards, then watched the day’s NFL playoff games, sat and chatted, and had pizza for dinner.

We finished the day by playing more cards (FYI, Uno was our game), watching Shark Tank (one of our favorites), and heading to bed. 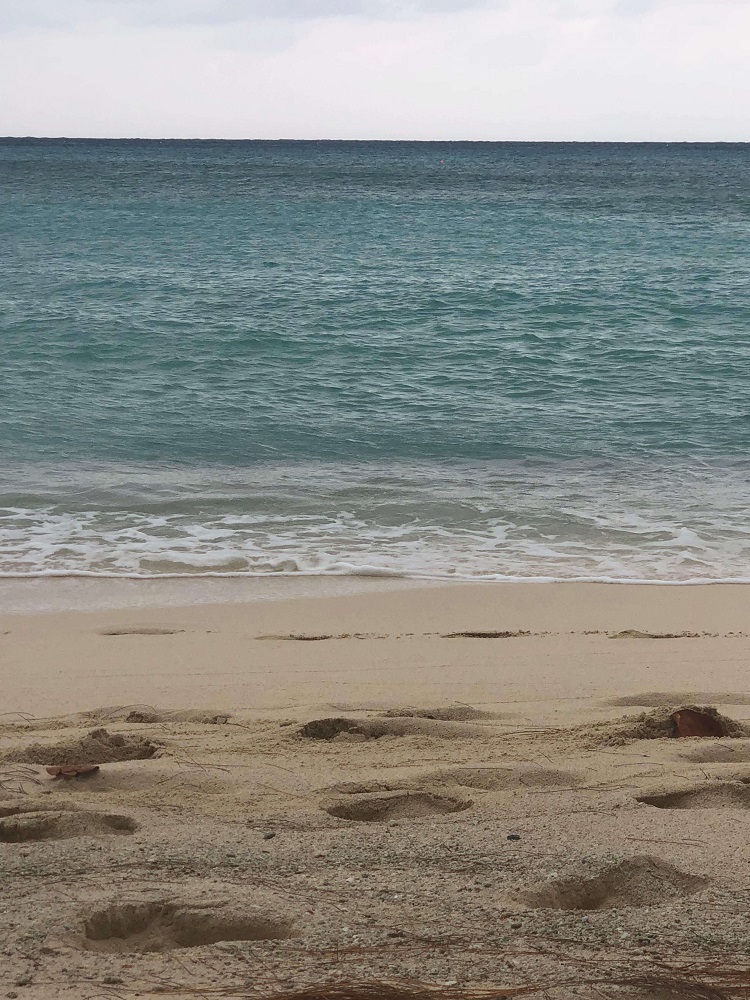 How our beach looked today (a bit overcast out).

Today we were up at 8 am, ate breakfast, and out the door by 10 am. It was a bit overcast — a perfect day for a trip to George Town.

We walked about a block to the main road, hailed a bus, and piled in. Ten minutes later we were downtown.

Wikipedia says the population of George Town is 28,836, but that must count about 20,000 tourists. Ha! The town didn’t seem that big to us.

And the crowds were not bad either. There were no ships in today so it was relatively mild. I’m sure Tuesdays through Thursdays would be packed as that’s when the most cruise ships come in.

The town had the normal shops that you see in every other Caribbean city (t-shirts, jewelry, restaurants, etc.) We did a good deal of shopping, buying several t-shirts among our group. 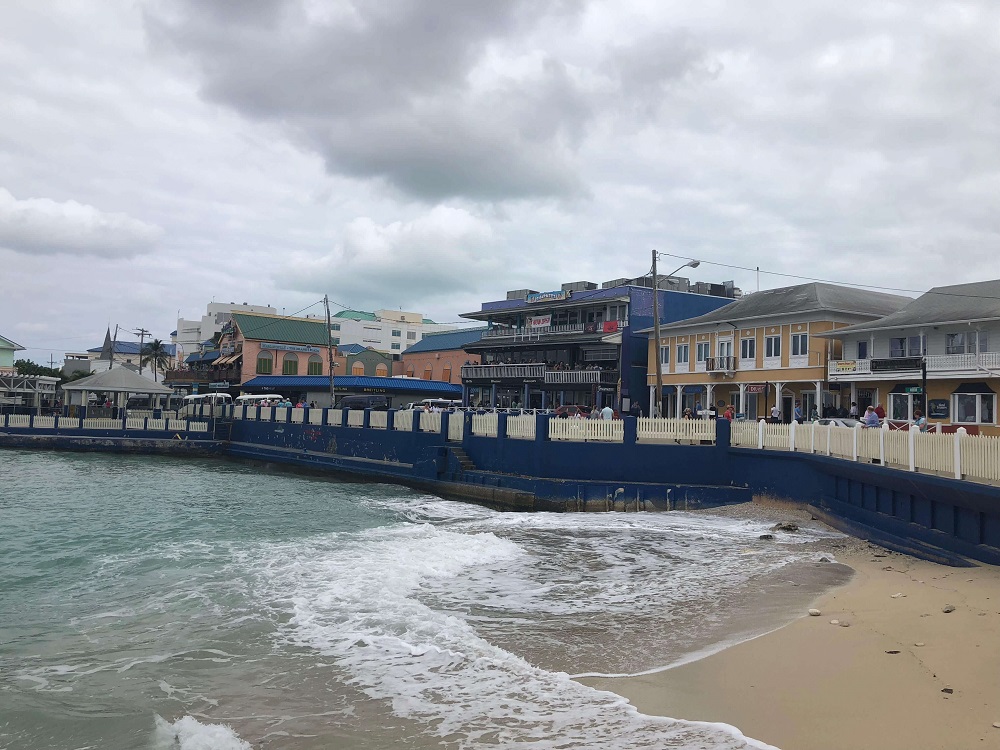 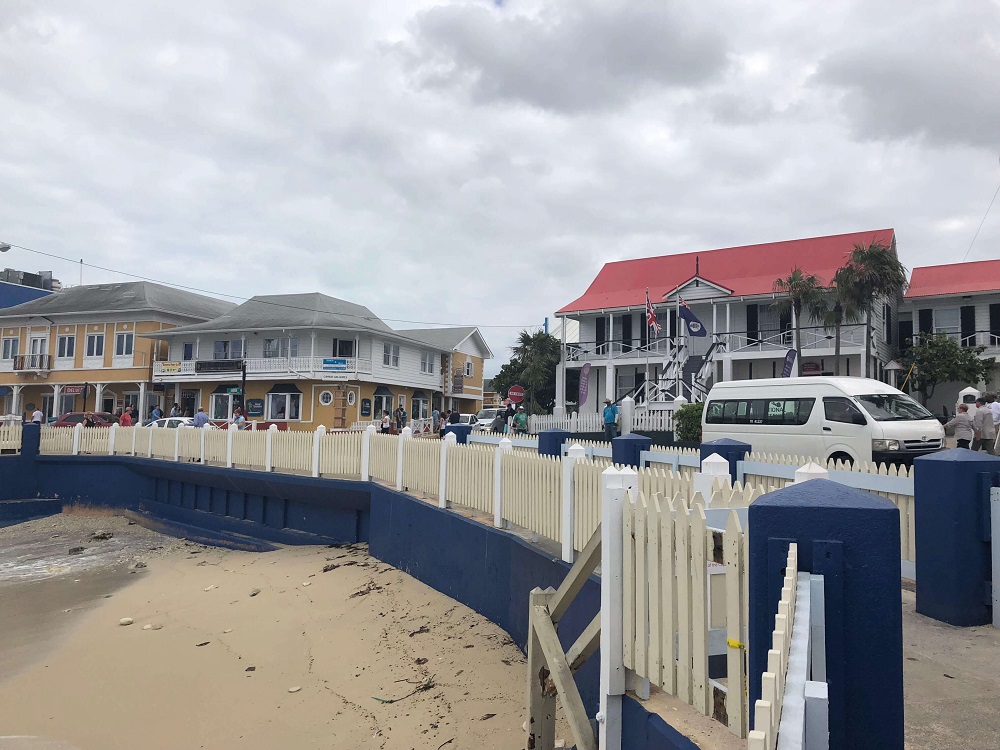 My mom and dad broke off from us soon after we arrived as they had been downtown. They wanted to see the rest of the island so they took a set of busses all around the East End and back (they didn’t get back home until 3:30 pm).

The four members of my family did some shopping. My wife grabbed an ice cream cone, then we got back on a bus to home.

BTW, you’re not supposed to eat food on the busses but if you ask the drivers, they will usually let you. 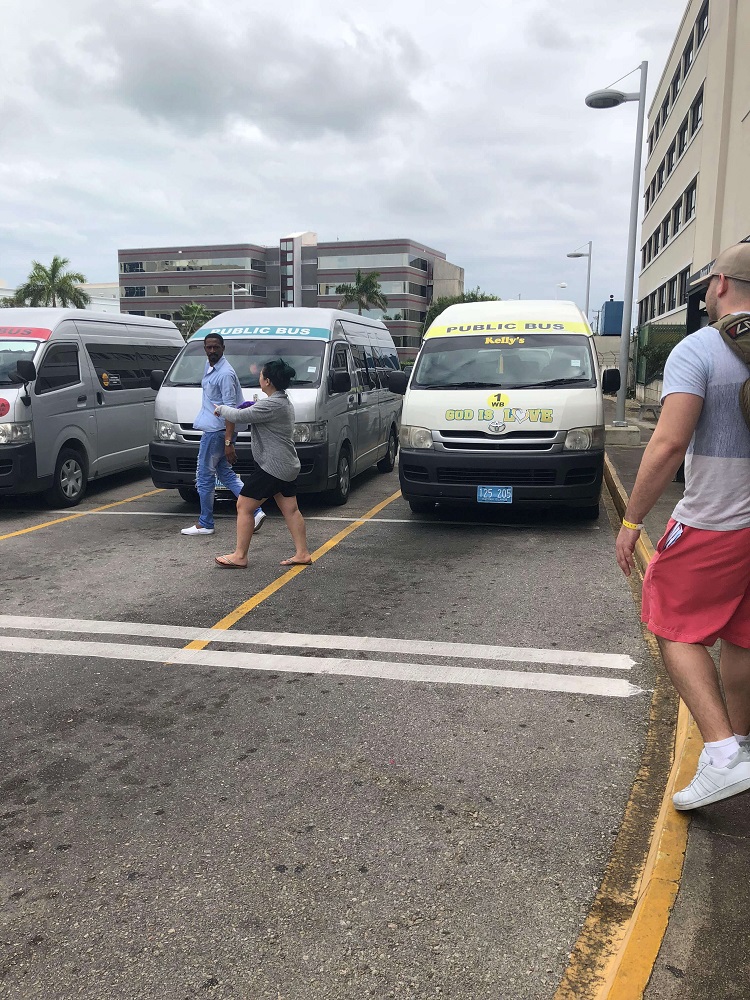 The “central station” (more like a parking lot) for busses in downtown George Town.

We were home by 1 pm, ate lunch, and hit the beach. The wind had kicked up and so had the waves (it was funny to see the fish pulled back and forth in the currents). We only stayed out for 45 minutes or so.

Once my parents got back we visited a bit and then went out to dinner at the Boggy Sand Cafe — the same place we ate on night #1. We joked that our tradition should be to eat there every trip on the first day and the last. I can recommend the Jerk Chicken as a tasty meal. 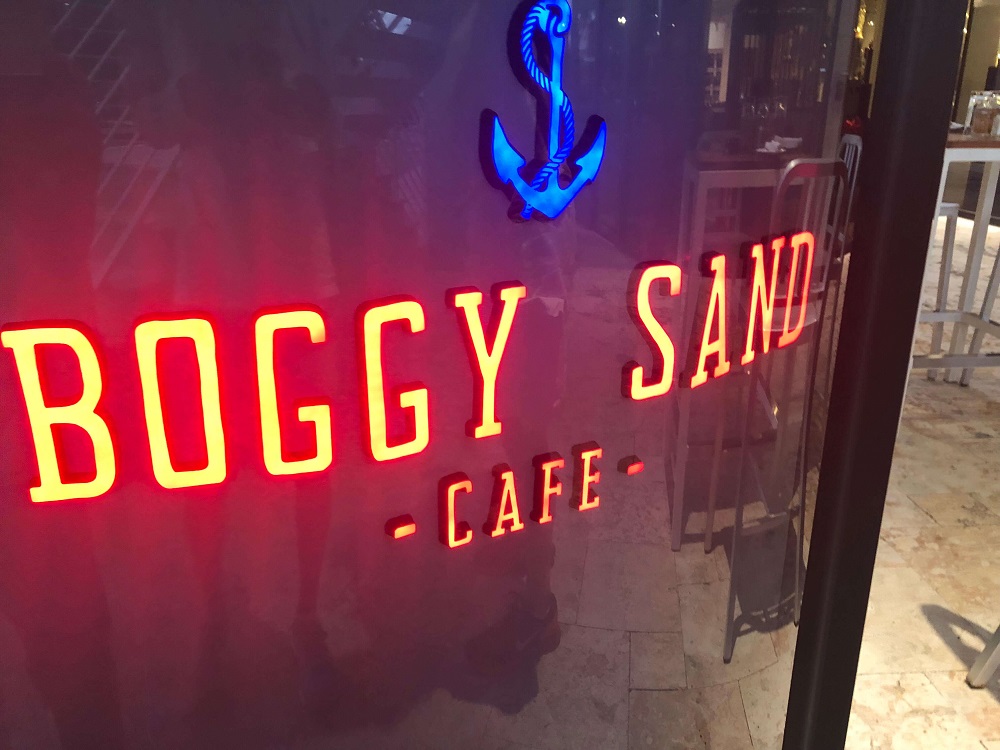 Good food and close to home!

We came home after that, packed a bit, and watched a movie before hitting bed.

Well, all good things must come to an end and today was that day for our trip.

We were up before 8 am and spent the morning eating, visiting, packing, and tidying up a bit.

At 12:30 pm (the owner allowed us to have a late check out since no one was coming the next day) a cab arrived and took us to the airport.

We all got checked in and sat together, chatting until my parents’ flight left.

BTW, the Grand Cayman airport is about the size of our garage. Ok, it’s not that small, but it is tiny. And they have all the planes arriving and leaving at the same time, so the waiting area was PACKED.

Miami International Airport’s customs process must have been designed by Hannibal Lecter or some other person who wanted to inflict maximum pain.

Step one was to stand in the line from hell. 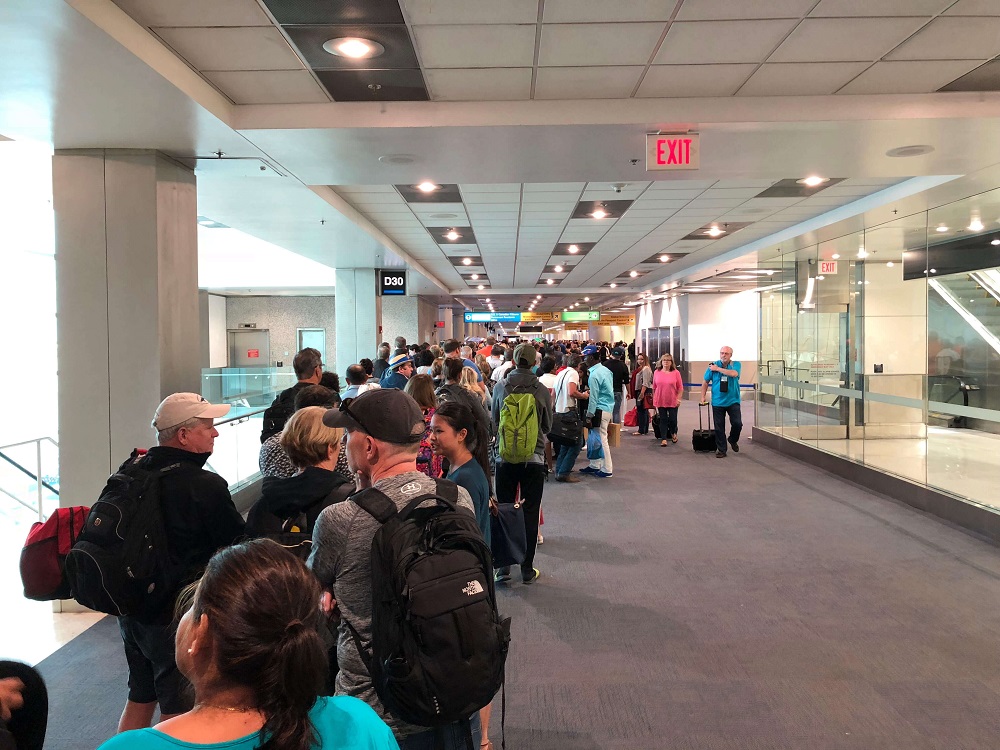 Step two was to fill out an electronic pass and get a slip of paper. Thankfully they gave us TSA pre-check slips too.

Step three was to stand in the line from hell’s brother. At this point in the experience there were signs asking us not to take photos. I know why — they didn’t want the word to get out how bad it was.

1.5 hours later, we were through customs (BTW, it took my parents 15 minutes in Atlanta). Thankfully we had carry-ons, no checked luggage, and TSA pre-check. Even with that, we got to our gate around 6:30 pm.

We grabbed a bite to eat. Grand Cayman food prices made airport food prices look like a steal! We then got on an 8:10 pm flight to Denver.

FOUR AND A HALF HOURS LATER (yes, it was brutal) we landed. We called the hotel shuttle and were lucky that when we got to the pick-up area one was already there. But it was pulling out, so I had to chase it down.

We got on, went back to the hotel, then drove home. An hour later and after 14 total hours of travel, we were home.

By the way, it was good we came home on Tuesday and not the day before. On Monday Denver had freezing rain and then snow that shut down two interstate highways.

Then it was sunny on Tuesday and it all melted, so we had no problems.

Because this is a personal finance blog and we have to have numbers somewhere, let me share the final expense numbers.

If you recall, when we were planning here’s what we had in our budget:

We told my parents that their Christmas gift was that we’d pay their $2,000. In addition we picked up a few other expenses for them along the way — like souvenirs, the boat excursion, and the turtle farm.

Let’s look at our actual costs a couple ways.

Here are the numbers if we had stuck to the original plan of my parents paying $2,000 plus their other costs:

Here are the numbers that we actually paid covering my parent’s costs:

When you compare the costs above versus what we were going to pay on our cruise, you get the following assuming my parents kicked in their portion:

And here are the costs if they didn’t kick in anything:

Cruising was even 5% more expensive per day if we paid 100% for Grand Cayman but my parents paid part of the cruise.

I’m not making a judgment on whether cruising is “better” or not to staying on a single island. I’m not sure if I’ve even decided that 100% in my mind.

But we had always wondered how the costs of a cruise compared to an island visit, and now we knew.

Ratings for Our Trip

I thought it would be fun to rate various parts of our trip for would-be Grand Cayman visitors. I’ll use a scale of 1 to 10, with 10 being best.

Well, that’s a wrap! It’s probably more than you wanted to know about our trip.

In parting I’ll leave you with a few fun pictures that didn’t make it anywhere else in the series. 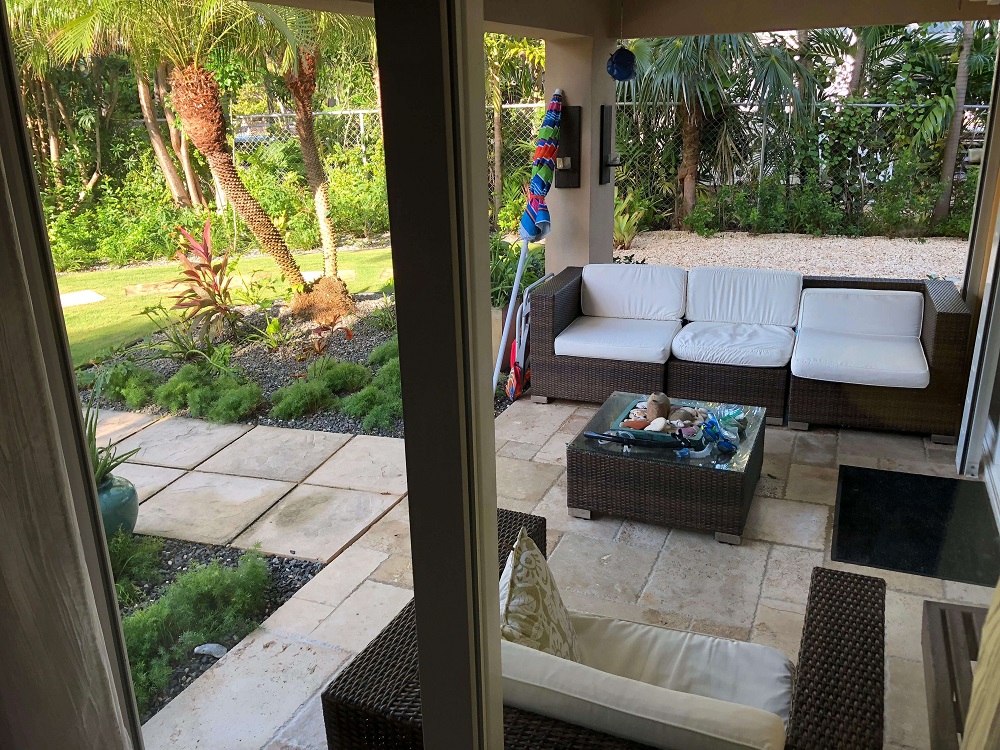 The patio view from our bedroom. We spent many a fun day and night sitting here, chatting, and relaxing. 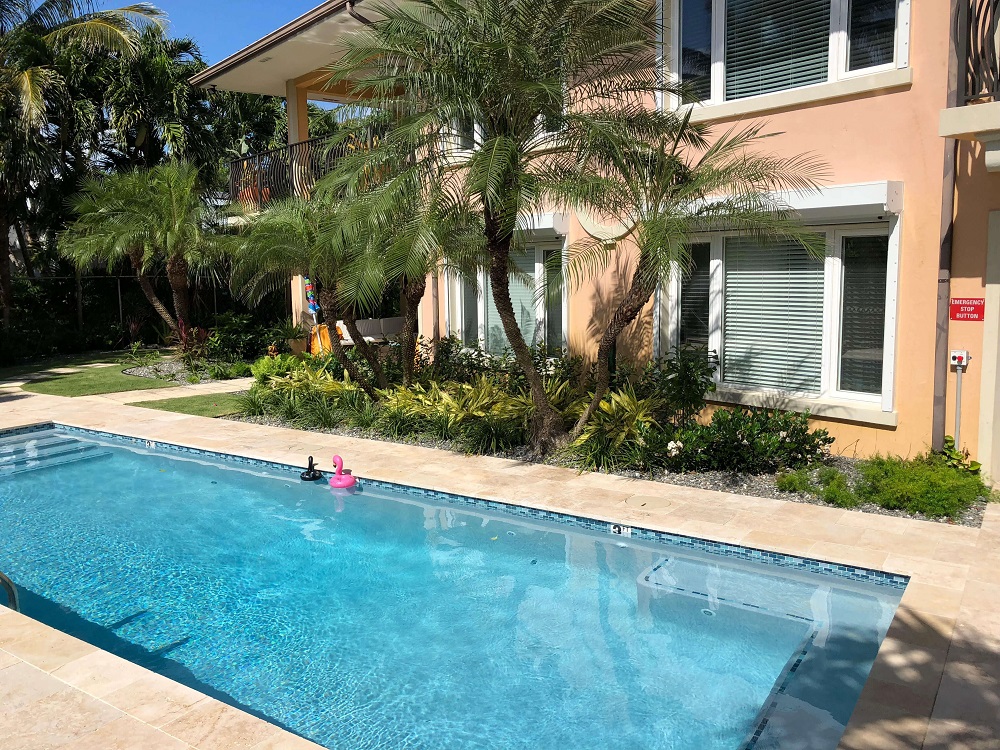 Our pool, taken from the other side facing the condo. Our patio is in the far left of the photo. 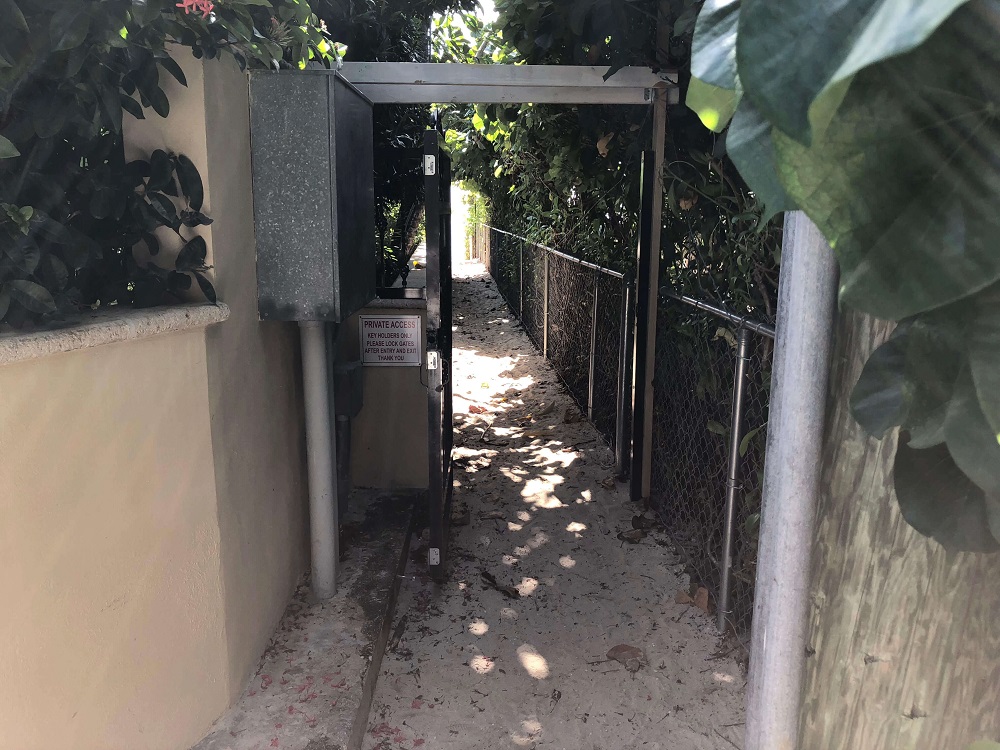 The short walk from our alley to the beach.