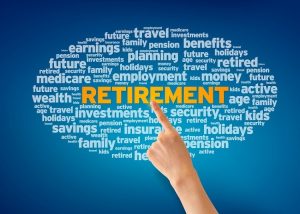 Today I’m going to share some options for setting up a retirement requiring $50k in annual spending.

I get a lot of questions like “How can I retire?”, “What can an average person do to retire?”, and so forth. This post should answer a lot of these.

There are many ways to retire (of course) but I’ll detail four of the most popular/likely options plus add some commentary on each.

Then you can chime in with your thoughts!

Before we dive in, let’s start with why I selected $50k.

Then I deducted a bit assuming someone reaching retirement saves at least part of their income, which they will no longer need to do once they retire.

BTW, they also may have no house payment as well, and thus need well below $50k, but this seemed like a nice, round number we could all generally agree on.

Plus it’s a number I think I could live on myself (though I don’t want to), so that’s another point in favor of using it.

If your specific number is a bit higher or lower, at least this post will have gotten you in the ballpark.

If it’s a lot different, you can use the same math here to calculate your specific numbers.

Now let’s get to the options…

Retirement Option #1: Save It All

This is probably the most common scenario discussed on the web today.

The idea here is that someone wanting to retire:

We could debate the 4% “rule” until the cows come home, but I’m going to use it here for demonstration purposes.

As with all these numbers, if you want to use something else, simply run the figures with your own assumptions.

So how does she get there?

Obviously there are a million savings and return rates that could be used, but I’m going to make the following assumptions:

Here are the results:

That’s a long time, but those are the numbers.

Retirement Option #2: Start a Side Hustle

Let me begin with a couple thoughts:

Here’s the key question as we consider this option:

How long do you would think it’d take you to create a side hustle that churned off $50k in income a year?

Because that’s what we’re talking about here, right?

If I had to do it all over again, I think I’d pick the last one as I know with a pretty good bit of certainty that I could develop a $50k business. Maybe not all in a side hustle, but between real estate and a side business, I think I could do it.

That said, my personal spending number is more like $75k rather than $50k, so I’d probably say, “I can pay for a good part of my retirement spending with a side hustle but not all of it.”

Which way would you answer?

Retirement Option #3: Combine Savings and a Side Hustle

This is where the magic begins.

The great part about this option is that the retirement income load is carried by both your savings and the side hustle. For instance:

You won’t have to save $1.25 million, thus lowering the number of years you have to save.

You won’t need a side hustle that earns $50k per year, which could be a bit daunting.

We’ll stick with our 15% and 30% savings rates and add in two assumptions for a side hustle (we’ll assume a standard level of earnings for each year there’s a side hustle but earnings would vary over time):

Now let’s look at the combinations:

Some of the results are rather close to the original numbers (just a few years off). It’s because once the savings reach critical mass, compounding takes over and it outpaces earnings.

That said, the final option can cut seven years off the path to retirement! This is like getting 21 years of life back. Not bad!

Retirement Option #4: Combine Savings and Savings from a Side Hustle

One thing option #3 does not account for is the fact that if you have a side hustle AND you save a good portion of that income, then you can retire much earlier.

Anyway, you can see how much of a difference the combination of saving + saving on a side hustle makes versus simply saving from your job.

Plus you can see that there’s not much difference between saving 15% or 30% if you have a $25k side hustle.

Anyway, look over the numbers and think through which option might be do-able for you and your family.

And if you’re wondering where you’d find an idea or time for a side hustle, check these out:

But none of these options are the fastest ways to get to a $50k retirement. Why do I say that? Because there are several ideas that speed each of them up.

The points are probably made, but let’s be super obvious and end with this: