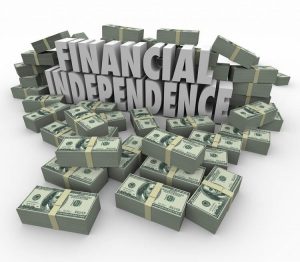 Well, here we are again — I have yet another financial calculator to share with you.

And this one is the granddaddy of them all!

Just so everyone is on the same page, I’ve recently introduced two new calculators.

One deals with the impact growing your career can have on your finances while the other answers the question, “When can I retire?”

I love these calculators and what they will do for ESI Money readers, but I also wanted to have one that encapsulates the essence of the E-S-I philosophy. So today I’m introducing the ESI Scale Financial Independence Calculator.

What is the ESI Scale?

For those of you who don’t know, E-S-I (in the name of this site) stands for earn, save, and invest. These are the three steps to wealth highlighted from the very beginning of this site.

Since I laid out my philosophy in that original post, I have added to the E-S-I teaching by illustrating how people can work the ESI Scale to financial independence (FI).

After that post, a reader used the principles and shared his example of working the ESI Scale. I loved what he did, decided I wanted more, and started the ESI Scale Interview series.

All of these posts focus on the three principles I espouse (the same ones I used to grow my net worth) and illustrate the various ways people use them to achieve FI. Some are heavy on one or two, while others are decent on all three. But whatever the combination, they can all add up to success if worked correctly.

I like the ESI Scale approach for many reasons, but my top to have to be:

To supplement all these posts I wanted a calculator that helped people work the scale for themselves. Now I have the right tool to do that.

What is the Calculator Designed to Do?

The calculator was created to help the user realize where they currently stand in each of the three areas — earning, saving, and investing — and how that leads to FI (how many years until freedom).

Then they can play with the inputs to see how their actions impact the road to financial independence.

From there they can make plans based on the inputs and get to work on them.

The calculator literally helps them to work the ESI Scale to reach financial independence.

We’ll get to the specifics in a second. For now, here’s the calculator…

As you might imagine, there are three main input areas to the calculator.

The first focuses on earning and includes the following:

Next is the "save" area which is actually quite simple. Just select the percent of your income (which you just entered above) that you plan on saving each year. Slide the scale to the correct percentage and it will automatically tell you the amount as well. You can enter in an average amount over the years or you can come back each year and adjust if it fluctuates widely.

Then there's the "invest" section which has two simple inputs:

Once you have all these recorded it's time to see how they add up to financial independence.

To do this you need a few more inputs as follows:

Now that you have everything recorded, you are ready for the results.

YOU'RE ON-TRACK TO REACH FINANCIAL INDEPENDENCE IN:

And then a big red box with the number of years.

This is how many years you have left to reach FI given the inputs you selected.

Below the red box there's a blue box that says "click to show detailed results". If you click that, you'll get a chart and a table showing the balance needed to reach FI, your actual balance in any given year, and where the latter surpasses the former -- which is when you become FI.

One note on the numbers: If you enter in any amounts for the side hustle numbers, the balance needed to reach FI will dip in the first five years as the new income pours in. Then it starts to go up as income remains flat and yet inflation takes its toll on your spending needs.

Now look at the results and begin to analyze them. From here you can see where you are and plan to make changes.

How to Use the ESI Scale to Reach FI

I've said all of this in various places, but let's just review the key steps anyone can take to drive towards FI (which are reflected in the numbers above):

On a final note, as you plan what financial independence looks like to you, be sure to build in as many margins of safety as possible to protect yourself from any unfortunate circumstances that may pop up.

Look the calculator over and let me know what you think of it.