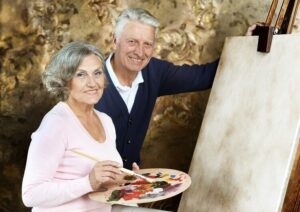 We’ve already covered several sections of the book previously. If you’ve missed any of those, start at the post on Retirement Failure and What Makes a Successful Retirement and work your way through the others.

Today we’ll finish some survey results and then get into the “Vitamin Cs of successful aging”. This is a bit different than my list of categories for a great retirement, but I do compare and contrast their list to mine.

In the last post we started reviewing some results from a survey taken from retirees.

Today we continue that…here’s the next set of findings I want to share:

In the questions around vocation, we asked participants about the role work plays for those who have retired in the past decade or so. If current trends play out, a quarter of you who retire will return to work—and not just because you may need the money. Needing a sense of purpose—something to wake up and show up for—was twice as important as earning money:

It’s interesting to note that more than half of the participants returned to work within a year (56%) while less than a quarter (22%) returned after being out of work between three and five years and 11% returned after being out of work one to three years. My interpretation of the data is that most people realized they missed working soon after retiring, or they got bored after a few years of nothing but leisure.

“Lack of companionship/difficulties meeting new friends” came up consistently as a problem with vacation (travel and leisure activities)—there were multiple comments about not being able to vacation because of a lack of money, health issues, and responsibility for a pet or house.

The survey continues with these responses:

A third of participants (33%) reported feeling guilty about spending money in retirement. Apparently, it’s not easy to flip the switch from disciplined savings to enjoying the spoils of your labors.

Very few people have the resources to withstand the correlation of their retirement nest-egg getting cut in half against inflating prices for living. It’s the veritable two-edged fiscal sword. None of us has prophetic insight into what will happen next, so managing our investment risk is a major consideration going into retirement.

This doesn’t mean all your money needs to be tied up in guaranteed annuities, but it does mean you need to know how much market correction you can tolerate with the lifestyle you’re living. If you’re working with a financial advisor, he or she should be able to walk you through this before you make the move into a place with no more paychecks. If you’re managing on your own, you’ll need to make sure you allow for as much margin as possible between your cost of living and the income that you’re relying on from your investments. If you’re in a position where a serious market protection causes a major disruption in your lifestyle, then you have to either recalibrate your lifestyle expenses of extend your time in the workplace.

The book now moves on from the survey results into thoughts on how to thrive in retirement (from a life standpoint, not a money standpoint).

It begins with this:

The MacArthur Foundation study mirrors Dr. Castel’s findings; both conclude that the three indicators of successful aging are:

There are things you can do to make the first two of these better (or at least increase your odds of success), but there are no guarantees.

That’s why I usually say to do what you want as soon as you can — you never know if you’ll be able to do it later. That’s one reason I’m so glad I retired at 52 and already have over five years under my belt. It’s also why I recommend people retire as soon as they can.

We’ll get into the issues of physical and mental activity in a moment, so I’ll save my comments on those for then.

The Vitamin Cs of Successful Aging

The book addresses these (and other) issues related to having a great retirement life by introducing what they call “the vitamin Cs of successful aging.”

Note that their focus is on “successful aging” while I have my own list for “creating an awesome retirement.” There is some overlap, but some differences as well. I’ll point out both as we get into it.

Here’s how they begin this section:

Gerontological studies from the past 40 years have turned up a number of factors that correlate with aging well. I’ve been taking notes as these studies have emerged. I was mildly entertained to see that five of the key factors correlating with aging successfully start with the letter C, and so I created the following self-assessment titled the Vitamin Cs of Successful Aging that you can use to rate yourself and your lifestyle. This profile features the following factors:

I’m going to share what the book says on all of these and then comment on each of them, so let’s get started.

Here’s a summary of Vitamin C1, which is connectivity:

Stay connected to people you love, people you enjoy, and people who appreciate you and see value in your presence. Longevity does not favor the Lone Ranger. Both long life and happiness are tied to the quality of your connections.

Yep. This is on my list of five. I call it “Social Interaction” and describe it as having “regular connection with others”.

Everything I have read says that by being social your life is better, your mind is stronger, you are happier, you are healthier, and on and on.

Of course what is “being social” to one person is completely different for another person, so you need the social interaction that works for you.

I don’t need a lot of social activity and get more than enough from family, gym friends, pickleball friends, church, online friends, and so on. Too much interaction in a week and I need some alone time. LOL.

Now let’s move on to Vitamin C2, which is being challenged intellectually and physically:

The latest Alzheimer’s research demonstrates that being intellectually challenged and having predictable taxation on our mental acuity can have the effect of a finger in the dike, holding back the degenerative processes leading to both Alzheimer’s and dementia. This research also concluded that as we hit our 50s and beyond, there is an exigency on ensuring that we have riddles to ponder, problems to solve, and things to fix. The brain is a muscle that atrophies without use. One gentleman told me that after six months of retirement, he could sense the dulling in his cerebral muscle, along with signs of slowed thing and sluggish articulation.

According to various studies and the American Gerontological Association, exercise and physical activity is directly related to successful aging. Three hours of exercise a week can increase your lifespan by five years. In fact, physical inactivity is a predictor of things to come: increased falls, fractures, heart disease, respiratory disease, diabetes, and more! It’s not a pretty picture. A more specific point to consider is that muscle mass declines by 1-2% a year past the age of 50 (if we’re not addressing the matter) and this affects our strength, our endurance, and our balance. That fact alone should be enough to get all of us pumping some iron on a weekly basis. Not only will you feel better, this type of exercise has been shown to improve cognitive ability as well—so you’ll not only know when someone is insulting you, you’ll be able to flex your bicep to stop them.

Much of what we think of as aging is really just a by-product of inactivity and poor nutrition, and it’s not hard to change that. —Mariam Nelson, physiologist, USDA Research Center on Aging

The Gerontological Society of America reported on a study that showed fitness training resulted in significant increases in brain volume for people aged 60-79. A cyclical relationship exists between body, mind, and spirit. It is difficult at times to explain, but, once experienced, it is well understood. One research study has shown that people who engaged in physical activities at least twice a week had a lower risk of dementia than those who were less active. In addition, starting to exercise more after midlife was shown to lower the risk of dementia. Another discovery of significance is the corporeal-cognitive spark—the fact that physically challenging exercise actually “sparks” mental acuity. So, challenging the mind helps the body and challenging the body helps the mind.

For those of you who are retired, how do you address these two areas?

Next we move to Vitamin C3, curiosity:

Curiosity guarantees a pulse in the brain and a reason to keep our bodies healthy. The role of mental alertness cannot be overestimated, and neither can the benefits of a desire to grow. Once a person reaches a point where he no longer wants to learn or grow, it is time to order the tombstone. It need not be formal education that we pursue; it can be self-taught or experiential learning. The important thing is to have the curiosity and desire to grow.

Age is an uphill road. Learning and tasks that demand mental alertness keep us in gear. Those of us who stay neutral in this area will quickly find we are going backward. Rigorous mental function helps to both facilitate productivity in later years and strengthen our need and desire to be active.

I lump this in with “mental stimulation” above as I think they are so closely related as to be part of the same effort — to keep your mind sharp.

I’m not a big class taker, but I do get a lot of information from reading (books and online) as well as traveling.

Vitamin C4 is covered next and the book labels it as “Creativity”.

Again, this is part of the mental stimulation section I list above.

It’s interesting to me that they break all these out separately when they seem to me to be better suited under one objective/purpose: keeping your mind active and healthy.

Anyway, that’s a wrap for today.

For the last post on this book, see The New Retirementality, Successful Aging, Hiring a Financial Planner, and Conclusion.