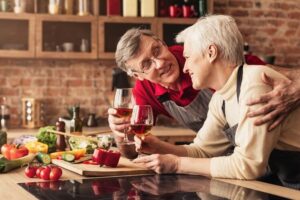 Today we conclude our coverage of the great retirement book What the Happiest Retirees Know: 10 Habits for a Healthy, Secure, and Joyful Life. It is packed full of solid information and statistics about the state of retirement today.

As the book begins to wind down, it features a final chapter that invites readers to “join the happiest retirees club.”

This section has some general, high-level advice and thoughts with this being the summary:

For the most part, these habits are not rules. They are meant to be guidelines. Think of them as variables in an all-important equation:

Remember those scary statistics I shared at the start of this book? Here’s the scary recap: more than four out of five Americans either can’t retire or won’t be able to maintain their pre-retirement lifestyle when they do, meaning they will not have the financial security to support all the things they want to do in their golden years. That means fewer than one in five people get to have a safe and secure retirement in which they’re not constantly worried about running out of money.

When you take all these happiness habits collectively — the money habits, the health habits, the social habits — they also lead to a higher probability that you will be able to retire sooner than most folks.

That’s my great hope: that the habits in this book will make you happy and healthy in retirement, and get you there faster. It seems to be good to be true. But that’s exactly what my studies have shown. The men and women already practicing these financial and lifestyle habits are not only happier, they’re ones who can retire one, three, five years sooner than they thought they could…which means they’ll be even happier.

Several thoughts from me on this:

30 Habits of the Happiest Retirees

The book ends with an appendix list of “30 Habits of the Happiest Retirees.”

I know. The list of 30 habits seems to fly in the face of the book’s title, which focuses on 10 habits.

In Wes Moss Interview on the Happiest Retirees I asked about this as follows:

Me: The book is about 10 habits of the happiest retirees and the appendix expands these to 30. Any idea how many of either of these someone must have to be happy (other than “the more they have the better chance they have of being happy”)? Do you need 7 of the 10 or 20 of the 30?

Wes: All retirees have financial and social situations that are unique to them. There really is no “one size fits all” for the happiest retirees on the block. Of course, we think the more of the 10 or the more of the 30 you have the better chance you will have of finding happiness in retirement.

The way I look at these, the 10 habits are fairly general and broad. The 30 habits are more detailed and specific and each falls under one of the 10 broad habits.

So to end this series I’ll list the 30 habits. In the book they all come with a paragraph or more explaining them, but you’ll have to get the book to read those. 😉

Before we get to those, here are some final words of advice from the author:

No one can observe every single one of these habits. I sure don’t! The idea is to incorporate as many as you can into your daily, weekly, monthly, and yearly routines. The more of these habits you adopt, the better your chances of becoming the happiest retiree on the block.

I was going to go through each of these and comment on where we stand on every one of them.

But after reading through the list, most of it would simply be, “Yep, we do that one” over and over again. That would make for some exciting reading, huh? Hahahaha.

So instead I’ll simply comment on the ones we DON’T do (or at least don’t do exactly):

I’m interested: how many of these describe you? Let your “score” in the comments below and/or list the ones you think you need to work on.

And that’s it. We have covered the highlights of the book, but there’s so much more in it and I highly recommend you get your own copy (I have read mine three times already).

Anyone out there read this book? If so, what do you think of it? What did you learn?