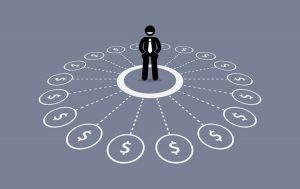 You’ve probably heard the phrase “multiple streams of income”. I’m not sure if he started it or not, but I first heard the term in a book written by author Robert Allen many years ago.

The idea of multiple streams of income is that you earn money from a variety of sources. Money is flowing into your life from the left and the right, from up and down, from the north and the south. You get the idea.

As you might imagine, I’m a big believer in multiple streams of income (who wouldn’t be?). Making more money is usually a good thing (as long as you don’t kill yourself while doing it) and it’s good to diversify income sources in case one stream gets cut off.

You know who else often has multiple streams of income? Millionaires. Just read through our millionaire interviews and you’ll see how often they have a variety of income sources.

Perhaps these people are onto something…

Earning Money in Many Ways Before and After FI

In most cases we talk about earning being comprised of two major efforts: your career and a side hustle.

And rightly so as these are by far the two largest earning options for the vast majority of people.

That said, they are not the only ones. So why not investigate the options and see if you can add a few more income streams to your finances?

If you can develop multiple streams of income in addition to the two options above (and not increase your spending), they will help you big-time in a couple ways:

You will get to Financial Independence (FI) sooner: The more you earn, the more you can save and invest and the sooner you get to FI/retirement. Pretty simple.

You’ll have extra margins of safety in FI: Regular readers know that I’m a big believer in having several margins of safety in early retirement. The reason: you never know what bad event might be just around the corner so it’s best to have a buffer built in in case something goes south. And if you have multiple buffers, you can then guard yourself against more severe events as well as ones where another margin of safety just isn’t enough to do the job on its own.

Here are the various income streams I had on my way to FI:

So those were the major income streams that helped me get to FI. I might have had a few others that I can’t recall, but these cover 90% of our income for sure.

After reaching FI, I worked another decade (because I was a moron) until retiring at 52.

As of now, here are my various income streams:

If things got tough for one reason or another (and I didn’t want to dip into investments for some reason), I could add a few sources of income making for an even greater margin of safety. We could add:

So that’s it for us — what got us here and where we are now.

What are your multiple streams of income both now and in retirement (if not already there)?