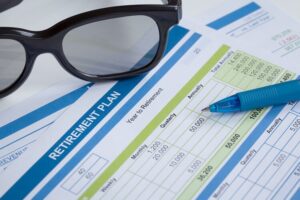 In Our Meeting with Two Financial Planners there was an epic comment that I just couldn’t let go to waste.

Off track a bit: if you have a question about a post, please put that question in the comments. If you email me 1) I might not see it as I get a ton of email and 2) no one else gets the benefit of the answer if I do respond.

Anyway, Apex left a comment which I’ll be sharing below.

The overall subject is how one should invest in retirement if they have $1 million or less. At least that’s how it’s phrased.

I think it’s just as good of an answer (or maybe even better) to “how should I set up my retirement investments to account for sequence of returns risk?”

We’ve talked about sequence of returns risk (also known as sequence risk) a few times lately, but here’s a short re-cap from Investopedia in case you missed those:

Sequence risk is the danger that the timing of withdrawals from a retirement account will have a negative impact on the overall rate of return available to the investor. This can have a significant impact on a retiree who depends on the income from a lifetime of investing and is no longer contributing new capital that could offset losses.

Sequence risk is the danger that the timing of withdrawals from a retirement account will damage the investor’s overall return. Account withdrawals during a bear market are more costly than the same withdrawals in a bull market.

Before we get to what he said, here are a few comments of my own:

After you read what’s below, let me know your take on it in the comments section.

TL;DR – if you just want the investment advice and not the long prelude skip to the section below the ************

Before I give my opinion on this let me just address the scary 800lb gorilla these guys brought into the room. Namely that this market has been riding a cocaine high for the past 10 years and the future looks dim. This was a purposeful scare tactic.

The data makes it look plausible and of course anything is possible. After all the metaphorical doomsday clock has been at 2 minutes to midnight for the past 2 years and they just moved it closer last week to only 100 seconds to midnight. The world could end at any moment, so eat, drink, and be worried. That seems to be the general state the media is always telling us to live in.

I see it differently and thusly:

1. Yes we have had the longest expansion in post WWII history, but it came after the sharpest recession and pullback in post WWII history. That fact is rarely part of the narrative but it’s a critical omission. We didn’t shoot off on a rocket from the top of the empire state building. We have been floating up in an air balloon from deep within an abyss. Everything is relative and our relative altitude is not as high as some stats can be made to appear.

2. Yes our PE ratios are historically higher than average, but they are not at levels that the previous two crashes had and there other differences that decrease risk.

2000 was the dot com explosion where the Nasdaq went up over 100% in 1999. People took out loans on their houses to buy stocks. Which stock? Any stock, because stocks just go up.

There were jokes about brokers promoting certain stocks and the client asking what do they do? Answer? Go up! That is likely just a story but it is representative of how mom and pop investors had gotten sucked into the mania.

2008 was the housing bubble where people bought houses with no income, no documentation, and no plans to even use the house. They just sat on it for 6 months and sold it for a 15% profit. When those loans began to default it was so pervasive across the financial sector that it brought down huge institutions and nearly the entire financial sector all because of rampant speculation. That is a key ingredient to a bubble. Speculative mania which is not present in a meaningful form in the current market.

(i) Side note: Housing prices have fully recovered since the crash and become hot in some areas. Housing is no longer cheap, but it is not a bubble either. House price strength is currently driven by pent up demand, low supply, and low interest rates, not speculative demand. There is no current bubble in housing. NO CURRENT BUBBLE IN HOUSING. Could housing stagnate or go down. Yes it could. Could it crash like 2008. No way. The buyers and holders of houses today are 10 times stronger than the sub-prime mess, credit default swap, AAA rated mortgage backed security fraud that precipitated 2008.

(ii) side note 2. I am not saying this just with hindsight. You have no way of knowing what I really thought but in 1998 I already saw excess in the stock market. I had predicted to many people that the mania had to end. I didn’t actually pull out any money so I don’t know what that meant about my conviction but I did believe it would end.

I was two years early and more than doubled my money before it actually did end so it was still better to stay in. Plus I was young so I didn’t have much to gain or lose anyway.

Oddly enough in March of 2000 I finally lost heart and threw up my hands and said I guess I am wrong, to infinity and beyond is possible. It crashed about a week later. So my fortitude gave out just a little too early, but it is a perfect example of another phrase I have heard often about the market. “The market can stay irrational longer than you can stay solvent.”

Don’t try to bet against the market. In 2006 I told my brother that housing had peaked. I didn’t expect housing to go up anymore after that year. It had become too detached from reality. From a housing sales number stand point that appears to have been about the peak, but housing prices did still climb for another year and it was another 2 years again before the stock market crashed.

So in both those crashes I felt there were strong pressures from excessive mania in the markets. My assessments appeared to be a couple years early before any consequences hit the market. And of course anything can happen and we don’t have to follow old patterns. The Coronavirus could kill us all and crash the entire economy. But I don’t currently see the types of things that caused the last two crashes.

So that all being said, do I think we can keep getting these kinds of returns for the next 20 years? No. Returns have been too high. There will probably eventually be some reversion to the mean but with interest rates this low that mean might be higher than it historically has been. And of course the pull back could be after the market goes up considerably from here.

Who knows. Not me and not these advisers. However the idea of 0% over the next 20 years seems very implausible. Even 3% seems unlikely to me. So I think one needs exposure to equities to provide any meaningful growth in their retirement portfolio.

My preference for retirement is to have growth assets like real estate and dividend paying stocks which throw off enough income that I never have to touch any principal yet the underlying asset tends to increases in value with the market as a hedge against inflation so that future income streams also increase.

That is why bonds are not listed as one of these assets because they only throw off income but have no growth potential.

I believe this to be the gold standard for retirement.

But other than the types of people who read sites like this, the number of people who are in a position to do this is negligible.

So what to do for the masses.

For those with less than $1 million of retirement assets, I would do the following:

The goal of this plan is to remove sequence risk where withdrawals from stocks at the wrong time have a devastating affect on the size of a portfolio making it nearly impossible to maintain the life style that it was previously affording.