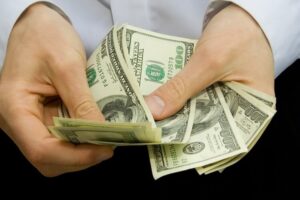 Here’s our latest interview with a side hustler!

As you know, I love creating a side hustle as part of a fast-track path to financial independence because it can make a huge difference (see this financial calculator), enough to actually get you to FI in 10 years.

If you have a side hustle and would like to be interviewed, shoot me an email and we can talk over specifics.

This interview was submitted in April.

As usual, my questions are in bold italics and their responses follow in black.

How old are you (and spouse if applicable, plus how long you’ve been married)?

We have been married almost 16years!

We have one rambunctious two-year-old.

They keep us on our toes and have made us ruthlessly prioritize our time and money.

We live in a suburban city of a large Midwestern city…although our house is right next to a corn field, complete with coyotes, cranes, and combines. So, it’s kind of like the best of both worlds?

We are only 45 minutes from the downtown area, so we don’t feel we are missing out on anything currently.

What is your side hustle?

My side hustle primarily consists of serving as a consultant on scientific and medical documents.

Unlike some other hustles, mine isn’t one that is a “set-it-and-forget-it” and relies on putting in the time.

Is there anything else we should know about you?

I am also Millionaire Interview 317.

Is this your first side hustle? If not, could you give us a bit of background on past efforts — both successes and failures?

I have been doing the side hustle in some shape or form for about 15 years. It has taken different iterations depending on my circumstances, different connections, and my skillset.

Please see below in the Building Stage, where I’ll detail my hustles from 2008 to 2022.

How did the idea of starting a side hustle begin?

My first side hustle, in 2008, was complete happenstance. I had a colleague while I was in graduate school introduce me to working sporadically as a fake patient for medical students as they did practice examinations and practice interacting with patients.

At the time, we were looking to pay down a lot of debt, so it lit a fire under me to the possibilities.

How did you come up with the idea?

At first, I could only take whatever could come my way. But as I gathered more skills, I started looking for more opportunities.

As I acquired more skills and experiences throughout my career, I’ve honed and targeted my hustle opportunities towards the most lucrative for me.

At this point, I am turning down opportunities because they don’t pay enough or they don’t seem interesting.

What made you think this particular idea could be profitable?

Well, because these hustles are essentially extra hours, it is almost always profitable. The true question is how profitable.

This is detailed a little further down, so keep reading!

What were the early days like — getting your side hustle off the ground, making your first dollar, etc.?

Making my first dollar was easy—I just showed up, ha!

What did you do to grow your side hustle? Were there any specific actions that resulted in major breakthroughs?

As my hustles have been varied across the years, I want to walk you through, year by year, what has happened as well as how much I’ve been able to charge.

Buckle-up for the deep dive!

Where did you find the time to work on it?

Mornings, nights, and weekends. Any extra time outside of the 9 to 5.

I’m an early riser anyhow, so doing some work while everyone else is sleeping lets me still see my family during the day!

Were you the only one involved or did others help out?

There were certain projects here or there that I took on, where others needed to be brought in for their particular expertise to create the highest quality work.

This did make those kinds of project less profitable, but quality and timeliness are the currencies of the day and essential to maintaining good business relationships.

So, I consider these types of projects to be more “investment” or “building” type of projects from a business standpoint.

Can you give us specifics on what you earn with your side hustle?

Below is a table summarizing the revenue/income, expenses, and profit from 2008 to 2022. All the nitty-gritty is above!

For simplification, I’m not including federal taxes as that is something that has to be paid. While it is an expense, since it gets passed onto my personal tax returns, I focus on saving some back in case there are taxes due but then work to maximize deductions. Some of the early years I had to find old tax returns.

For simplification, I have not broken out what’s been paid as a W2 vs a 1099, but know that it has been a mixture throughout.

What impact has this extra income had on your finances?

It helped us pay down debt!!!

Also, we’ve increased our giving amounts and shared the “spoils” with family by taking them with us on vacations, etc.

What went well in this process?

I tried to treat every hustle as a learning experience. Take from it what I can and then apply to go bigger and better in all 9 to 5s and other side hustles.

Breaking into the private sector, along with not being afraid to raise my rates, has proven instrumental for increasing the revenue of my side hustles.

What could have gone better? What do you wish you would have done differently?

Honestly, out of fear, I held on to some of the less lucrative, lower-paying side hustle opportunities way longer than I should have.

It took me quite some time to realize what I have to offer could be worth on the open market.

If I had to do it over again, I would have started charging a whole lot more, a whole lot sooner.

Has it been worth it? Why or why not?

My side hustles have enhanced my 9 to 5s and vice versa.

What are your future plans for your side hustle?

Current plans are to keep pursuing the most lucrative side hustles (in terms of hourly rate).

Soon-ish, there are plans to investigate other side hustles, in real estate perhaps, that could be a bit more of a “hands-off” proposition.

What advice do you have for ESI Money readers who may be thinking about creating their own side hustle?

Never underestimate the power of relationships and connections. My most lucrative hustles have come from former employers or former clients.

Critically, my consulting/side hustle has been asynchronous work (so does not need to be completed during typical business hours).

Figure out what you know how to do that people will pay for. Quality over quantity is the way to go! The best clients are those that understand the premium they need to pay to get the best quality and will do so willingly.