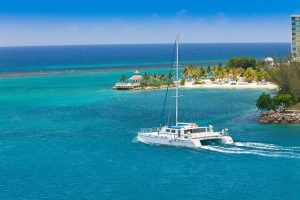 If you’ve been reading ESI Money for any length of time you know that I love the Caribbean.

We have been there a handful times (three on cruises and twice on trips to Grand Cayman).

If it was up to me, we will go there at least once per year for the rest of our lives.

And by “up to me” I mean that I am planning at least one trip there per year. 😉

In addition to my love of the Caribbean, you also know that I’m fascinated by the thought of retiring on a cruise ship. It’s still something I would like to give a try. But that’s a no-go from my wife.

But what about going a bit smaller? What about buying a boat, living on it, and sailing it around the Caribbean? Is that reasonable? And what would it cost?

It’s something I’ve pondered for some time now, but has recently popped into the forefront of my thinking.

It Starts with an Excursion

This “dream” (if you can call it that) started many years ago. We took a cruise to escape the Michigan winter.

Once back home I considered going back to the Caribbean but this time renting a catamaran (with a captain).

My wife didn’t like the idea so we put it on the back burner and took another cruise the next year.

But the idea did not leave my mind…

The idea of living/sailing on a ship had almost perished from my thoughts when my interest was suddenly renewed.

My friend, Michelle, from Making Sense of Cents gave up her RV living for what????? Yes, a catamaran!

What? That’s a thing? People actually live on a boat? (And by boat I don’t mean those nasty houseboats on the Mississippi River back where I’m from.)

I mean a very nice boat. In the Caribbean.

I guess I always knew that some people did this, but I was clueless that many did.

And now someone I knew was doing it!

Obviously I was intrigued and asked if she was going to document her experiences on video. But since she already makes $19,927,345 a minute on her blog (or something close to that), she doesn’t really have any incentive to do it.

But she did share links to several people who are recording their lives living on catamarans.

So for the past few months I have been watching YouTube videos on the subject.

The first is a video blog titled Sailing La Vagabonde.

In case it’s not clear, La Vagabonde is the name of the boat. 😉

Anyway, this series is done by an Australian couple (+1 for the accents) who produce videos of their catamaran life.

The videos are very professional (+2) and always include cool music (+3).

And the combination of an attractive and charming woman (+4) with a stud of a captain (+5, you should see the videos of him deep diving and spear fishing, the guy is a beast!) makes their videos fun, entertaining, and educational while also showing great Caribbean scenery.

Here’s a recent video of theirs (warning: if you watch this, you’ll likely find yourself spending the next 4-5 days reviewing back episodes):

Gone with the Wynns

The next video blog is titled Gone with the Wynns. Haha! Big bonus points upfront for a cute title!

This 30-ish couple is sailing all over creation and sharing their story.

They are very friendly people, the sort you’d want to have as neighbors — especially since that would mean you’re in a great location as well!

They also have cats on board, which makes for some funny video moments.

I watched them cross the Pacific Ocean in their catamaran (yes, you read that right — they did it) and I was on the edge of my seat with every video!

Can you imagine crossing the PACIFIC OCEAN in a catamaran????!!!! I was afraid they were going to be hit by a 50-foot wave, lose power, run out of food, or any one of a number of calamities that seemed imminent. I tell you, I think I was more happy for them to see land than they were.

Here’s the episode from the end of that trip:

I’m not sure what’s going on with the gang from SV Delos.

There are several guys and girls, somewhat of a rotating cast (or so it seems), in their 20’s, sailing all over creation together.

Imagine a college fraternity and sorority got together and decided to sail. That’s a bit of what SV Delos seems to be about.

I have no idea what their off-camera antics entail, but I bet it’s crazy.

The on-camera stuff is mild and full of great scenery, exotic locations, and lots of sun and water.

How Much Does It Cost?

Now that Michelle’s got me watching all these sailing video blogs, I started to wonder about the finances.

What does it cost to live on a boat and sail it around?

The answer is not as easy as you might think.

What does it cost to live on land?

As you know, there are a gazillion answers to that question based on lifestyle choices and a ton of other factors.

It’s the same with living on a boat.

For instance: Do you want to live on a multi-million dollar yacht or a dinghy that’s the water version of camping in a tent?

Your choices make a HUGE difference.

But I still wanted to get a “general” sense of what it would cost, so I did some googling.

Costs of Living on a Boat

To no surprise, the main costs of sailing boil down to two things:

Let me share some of the resources I found that detail these costs (at least in part) and make some comments along the way.

We begin with this video that (of all things) tells the financials behind Sailing La Vagabonde:

In other words, they are not hurting for funds.

Next I found an article on Business Insider.

This couple spent $150k on a boat, then moved it to San Diego where:

By comparison, they would spend $2,500 to $3,000 to rent an apartment in a similar area of San Diego, and still be paying the boat’s mortgage on top of that.

Ok, so that’s if you want to live on the boat and not sail it. A bit different than what I was looking for but still adds to the general topic knowledge.

Let’s move on to this video where a couple details their costs:

They go through a variety of expenses (note to the editor: a chart would have been nice to summarize everything).

Down in the comments there is some gold. Namely this:

Turns out this seems to be on the high side of things…moving on to this video:

There are different budgets and different styles of cruising – you can spend from $500 to $2,000+ dollars per month while sailing. We give you the tools to calculate your own cruising budget, because you need to find a budget that works for YOU.

They also give this advice: to lower expenses, be as self-sufficient as possible.

In other words, you can save a ton by anchoring in a harbor versus at a marina, creating/using your own energy, catching your food, etc.

Even More Information on Sailing Costs

Now let’s go into the lightning round.

Lots of information here and quite a spread on costs.

So What Does It Cost to Live on a Catamaran?

The short answer to “what does it cost?” is “it depends.”

But let me try and wrap it all up into a somewhat cohesive set of conclusions:

In the end I think this is an exercise in futility for me. While I might consider this as a lifestyle option, my wife still has flashbacks of the cruise where we had 25 to 30 foot waves. She gets seasick just thinking about that. So I’m not likely to be sailing around the Caribbean anytime soon.

But…I still have hope that we could rent one for a week and see how we like it. Ha!

Anyone out there have a boat and/or ever want to sail/live on one? I’m hoping you can share your stories and tips with the rest of us.