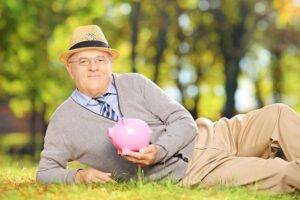 Money Habits of the Happiest Retirees

Today we’ll look at the top money habits of the happiest retirees — what they do financially that makes for a great retirement.

Turns out there are “three core, actionable money habits that nearly all HROBs (Happiest Retirees on the Block) have in common.”

I know, I know. This seems low to me as well.

We’ll get to that in a minute. For now, let’s see what the book says on this subject:

That’s the inflection point for happiness: half a million. A net worth beyond $500,000 doesn’t have nearly as much impact on higher happiness levels as getting to $500,000. Meaning, even as your savings continue to climb, your happiness won’t necessarily rise at the same rate it did from zero to $500,000. Liquid retirement saving simply means that this is money you can access with ease, such as stocks, bonds, mutual funds, ETFs, cash, etc.

Retirees with around $100,000 reported feeling unhappy or just slightly happy.

Of course, $500,000 may still sound like a lot of money, especially if you’re a twenty- or thirtysomething who’s still accumulating wealth. I’m not saying half a million is chump change. But it is a much more attainable goal than $2 million, and no matter your income level, you have a better chance of reaching it.

How? You start by budgeting.

So there you have it. The secret to a happy retirement isn’t having $2 million in the bank, no matter what Suze Orman may tell you. On a recent podcast, Orman raised eyebrows with a bold statement about how much money people need to retire. “You need at least $5 million;” she said, “or $6 million. Really, you might need $10 million.”

Happiness in retirement is about having a simple plan, getting started, and being committed to having a least $500,000 saved up by the time you retire. The vast majority of the HROBs featured in this book do not have millions upon millions in retirement savings and they were still able to stop working and live joyful fulfilling lives.

Out of curiosity I Googled “how much net worth do Americans need to be happy?” and came up with these:

This Harvard Study of 4,000 Millionaires Revealed Something Surprising About Money and Happiness. Some key quotes and my thoughts:

Here’s how much money you need to be happy. This article is absolute trash. How can Google rank this so highly? A few quotes:

This is how much money it takes for millionaires to be happy. One main thought here (it from the same study referenced in the first article):

In the end, I’m not sure we learned anything other than trying to equate money and happiness is a hard thing to do. LOL.

2. A mortgage payoff that is complete or within sight.

We’ll get to my thoughts in a minute, for now, here’s what the book says:

This is a big one. I believe the happiest retirees enter post-career life either mortgage-free or within five years of hosting a mortgage-burning party.

The argument you’ll hear from the camp of pro-mortgage pros is that you can do better by investing your savings as you continue to pay interest on your house. As an example, these planners say that, instead of using $100,000 to pay off a 4 percent mortgage, you should invest it in the market, where you could see a return of, say, 8 or 10 percent. The result: a net 4-to-6 percent gain.

Hmm. This logic looks good on paper, but it may not hold up as well in the real world. As we all know, the market can drop or stay flat for relatively extended periods of time, and our gains should be measured in decades, not years. And since the average lifespan of a mortgage in the United States due to frequent housing moves is less than 10 years, this timeline might not work.

I’m a believer in the One-Third Rule. If you can pay off your mortgage with no more than one-third of your nonretirement savings accounts, you should consider doing so. For our purposes, nonretirement simply means after tax brokerage or savings accounts, not your 401(k), IRA, or retirement savings plans from work. If you owe $50,000 and have $160,000 in savings, drop that bomb on the mortgage. You will still have $110,000 in liquid assets to ease you along the retirement road.

In addition to financial considerations, think about how your mortgage affects your emotional health. I’ve learned from the happiest retirees that there is a real sense of peace and serenity that comes with knowing you own your house free and clear. It just feels good as you enter a new phase of life that is chock-full of changes.

Eliminating a house payment also dramatically lowers your monthly retirement living expenses, taking the pressure off your nest egg and other sources of monthly income. This step leaves you with more money to follow your dreams and passions — for travel, hobbies, or charitable giving. In other words: your core pursuits. That’s what a happy retirement is all about.

My thoughts on this:

In the end, the choice is up to you. I’m happy with the decision we made at the time. Not sure what I’d do these days if I was 30 and starting out, but knowing my wife’s hatred for debt, I bet we’d pay off the mortgage. 😉

Ok, so this makes sense.

If you have $500k saved up AND you have multiple streams of income, having a good level of retirement spending is much easier (and thus accounts for much happier retirees).

More on that in a moment, but let’s first review what the author says on this subject starting with his “Rich Ratio”:

Here’s how to determine your Rich Ratio:

First, calculate your total monthly income. If you’re still working and looking for the ratio you’ll likely have during retirement, then use projected values. Remember to consider all possible retirement income streams: paychecks from part-time work, Social Security and/or pension benefits, rental income, miscellaneous sources, and, of course, the amount your investments should produce. Also, make sure to adjust this number for taxes so you have a “net income” number to work with.

Now that you have an income figure, it’s time to calculate your needs. To do this, simply use your projected monthly retirement budget. With these two numbers, our equation looks like this:

This system works regardless of your income level. A Rich Ratio greater than 1 is fantastic. A Rich Ratio under 1 means there is room for improvement.

When it comes to generating income, it’s a good idea to go from relying on one income stream to many.

Essentially, you’re creating as many tributaries as possible to come together in one new, predictable, larger river of income. You likely already have ideas about where you can gain other sources of income. These could include multiple pensions, Social Security, rental properties, investments, or part-time work.

Lots to comment on this one, but let’s begin with the Rich Ratio. I’m not a fan.

In Wes Moss Interview on the Happiest Retirees I asked about the Rich Ratio and we had this exchange:

Me: I’m having trouble understanding the “Rich Ratio”. Not understanding the concept but more understanding the name. Does it really mean the person is “rich”? It seems if your ratio is 1 you simply have income equal to expenses, which doesn’t seem too rich, it seems like “barely making it”. Can you tell us why you think it makes someone wealthy?

Wes: There are many definitions of “rich” but I guess it really comes back to these happy retirees we’re talking about. Happy retirees are “Masters of the Middle” in that they’re not looking to keep up with the Jones next door. They’re more interested in maintaining a lifestyle that they’ve found brings them joy.

So sure, being able to cover your expenses might not make you rich like the Kardashians, but it does allow for a rich life filled with a wealth of experiences and people that you care about. What’s not rich about that?

I’m still not a fan.

To me the formula he has above does not make you “rich”. It makes you “break even”, “barely covering expenses”, or “meeting your needs”. But those names aren’t as sexy as “rich”.

Now if your “needs” include everything you could ever want or imagine, then yes, it may make you feel “rich”. But I don’t think that’s what he’s talking about when he lists “needs”.

So I remain a non-believer on the Rich Ratio. And I certainly don’t think “A Rich Ratio greater than 1 is fantastic.” I would say it’s just enough to get by — far from fantastic.

What would be a “Rich Ratio”? Two times needs? Three times? Something else? Let me know your thoughts.

That said, I am a big believer in multiple streams of income.

I like having many ways to make money, I like them to be varied, and I want them so not a single one dominates the other.

As I write this, I have the following sources of income:

The first four could individually almost pay for our entire annual living expenses by themselves (and they certainly could if we pulled back on spending just a tad).

I have another source I’m working on as I write this (classes/courses) and someday may even see Social Security. Ha! So there could be more sources on the way!

That’s it for this time. To read the next post in this series, see What the Happiest Retirees Know, Developing Core Pursuits and the Benefits of Volunteering.