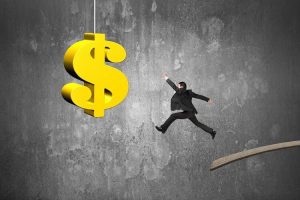 As you can tell from the title, this piece is kind of provocative. That’s the way I like it. 🙂

I actually wrote this post several years ago and am updating it now. The promise in the title is even easier now than it was then and much easier than it was for me when I completed the task almost 25 years ago.

Of course, six figures isn’t what it used to be either, but I’m getting ahead of myself.

Let’s start from the beginning.

Historically, “making six figures” has been to income earners what “becoming a millionaire” has been for those tracking their net worths — a lofty goal achieved by only a select few. And while neither a six-figure earner nor a millionaire can bask in the luxury they could a few decades ago, there’s no doubt that earning over $100,000 a year still puts you in a select group.

In fact, according to this handy calculator only 8.3% of all U.S. individuals with incomes and only 24.4% of all U.S. households had incomes of $100,000 or more in 2014. So despite the drop in purchasing power from the days of old, if you earn $100k or more each year, you’re still in a pretty good group.

So how can you get into the six-figure club? There are many roads to this golden path (lottery, inheritance, take over a family business, etc.), but many, if not all, of these are out of your control. As such, I’m going to focus on what I consider to be the method that will give the most people the greatest chance of earning $100k or more — by developing a career and growing it over time. Specifically, I’m going to tell you how I got to six figures in seven years and how you can use these principles to do the same.

You’re probably skeptical. I’m ok with that at this point. Read on with an open mind and I think you’ll be pleased. And while I can assure you that the tips below are proven and repeatable, I must admit that they’re also challenging. Therefore I’d like to make the following perfectly clear before I get started:

I’ll end this preamble by saying I’m not trying to brag (though I realize some of this may sound like it), just offer you a first-hand experience of what worked for me. In fact, I’ve had to eat a lot of humble pie during my career. My road was not smooth or without its own challenges. But even with those obstacles I’ve been able to live out the principles that follow and lead to a six-figure income. I hope you can do the same.

That said, here are my five steps to six figures in seven years:

1. Get a high-earning degree from a good school.

It’s a fact of life that certain college degrees result in a higher earning potential. So graduating in one of these fields gives you a built-in jump on the pack as you try to reach six figures quickly. If you want to be a teacher, that’s fine, it’s a great and noble profession. But it’s likely you won’t be able to make six figures quickly (if ever.) If you focus on the top few degrees (and the professions associated with them), you’ll get a big head start towards reaching your goal.

If you’re interested in what jobs make the most money, here’s a list of the 30 highest paying jobs in America.

Note that I suggest you go to a “good” school. In my opinion, you do not need to go to a top-notch college to make this work. I recommend going to the least expensive school that gets you the degree you need and the initial job you want. Once you do this, the school you attended makes very little difference in your career or earning potential. I went to a top 25 business school (not top 10 or even top 20), but I left with only $5,000 in debt and the job I desired from my targeted employer. Others who started at the same time I did and in the same position came from top 10 business schools and many had tens of thousands of dollars in debt (I know because they complained about it often).

Before I decided to go to my graduate school, I knew the employer I wanted to work for recruited there. You should know the same (or at least the set of employers you’d like to work for). Just like a resume’s main purpose is to get you an interview, graduating from college’s primary purpose is to get you that first job. Often a “good” school can do the job just as well as a “top” college.

2. Work for a name-brand employer at your first job.

No matter the field, there are certain companies that have an aura of respect around them — companies that are known to be good trainers and that are admired by people in your field, around the country, and, if good enough, the world. Some of these include: Google, Apple, Disney, Nike, Procter and Gamble, the Mayo Clinic, McKinsey, and so on.

There are two main reasons you want to work for a top-notch company:

1. They generally pay well (though maybe not the best), and you certainly want to have as high of a starting salary as possible.

2. Working for these companies gives your resume an added boost since they are “known” to develop excellent workers.

As such, they are companies that other companies recruit from, offering you more (and better) job opportunities in the future. It’s been twenty-five years since I worked at one of these great companies and I still have colleagues, recruiters, and employers (even at the last job I interviewed for/got a year ago) regularly say something like, “Wow, you worked there” or “You have some great experience” simply because I worked for a name-brand company over two decades ago.

How can you become employed by one of these companies? Simple: go to a school where the company recruits (review point #1 again). Beyond that, network with alumni, school administrators, and anyone else associated with your target company (or companies) to give yourself the best advantage of getting hired. I happened to know an undergraduate student that went to my target company during my second year of grad school. I kept in touch with him and he was instrumental in getting me hired (and we eventually became roommates.)

There’s no way getting around it — if you want to be on the earnings fast-track, you need to be on the high-end of the performance scale. What does this mean exactly? It means you need to find out what your employer expects of someone in your position and give them much more than that.

If your expectation is to save the company $50,000, work to save it $100,000. If you need to grow sales 7%, work to grow them 12%. If your goal is to get five new customers ordering your product, work to get eight. If you over-deliver versus your expectations and so consistently and with a variety of different projects, you will be a high-level performer and receive a commensurate level of financial rewards. I detailed all this and more in 7 Steps to Millions More: Over-Perform.

In addition, you can really super-charge your performance (and thus your pay) if you work on any of the following:

Of course, these opportunities are a double-edged sword — they can propel your career if you succeed, but they can also devastate it if you crash-and-burn.

Finally, having a good, pleasant attitude is at least a tie-breaker (some say it’s more) that will help you advance in your career. Everyone likes performers with good attitudes more than performers with poor attitudes, so be positive — it might just pay off for you (literally.) In other words, be likeable.

Big pay bumps, even for high fliers, don’t usually come with the frequency or size that they should. After all, many employers are quite happy giving you the least they can even if you’re slam-dunking projects left and right. That’s why you need to:

The main point I want to emphasize here is you can’t allow your career to be on auto-pilot. If you do, you’ll get auto-pilot raises and auto-pilot opportunities, and you’ll severely limit your chances for making the big bucks. But if you work at it, you can get regular, meaningful salary increases — something that’s even more important than starting with a high starting salary.

I hate that this is on the list, but I have to be honest, luck is a factor in career success. The reason I hate it is that it’s the one tip you can influence the least (if at all.) Sure, you can try and “make your own luck” by putting yourself in the right situations, accepting the right jobs, selecting the best employers and so on, but ultimately, much of life and the results of work are out of your hands. All I can suggest here is to look at all the pros and cons of a job change, promotion, business situation, etc. and consider them carefully — trying to maximize the number of events where luck is in your favor and minimizing the ones where you get bad luck. Also learn to ride good luck as long as you can and cut your losses as quickly as possible when bad luck shows up.

That’s it. Those are the five steps I used to grow my income to six figures in seven years, and they’re the same tips that have helped me maintain my income growth past that point. I can’t guarantee that they’ll get you to six figures in seven years, but I can say that if you apply them to your career, I’m pretty confident that your income will grow much faster than it would have if you had not applied them.

Some of you may be thinking “That’s great advice — I wish I had it 20 years ago.” In other words, you’re past the point where a few of these steps work, so what can you do now to increase your income? My suggestion is to get into the process above at the earliest possible step.

For example, if you think it’s worth it and you have the time and money, consider going back to school (step 1) to get a new/better degree. If this isn’t a possibility or not very practical, start networking your way into a name-brand company (step 2). And if this isn’t feasible, everyone can at least start with step 3 no matter where they are in their career. The later you jump into the process, the less impact it’s likely to have on the goal of reaching six figures. However, applying even just the latter steps (especially #3 and #4) will allow you to grow your income far more than it would if simply left to drift on its own.