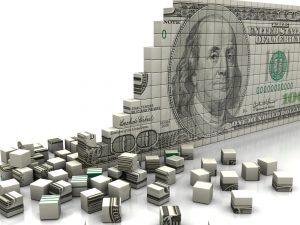 In my post titled You Can Become Wealthy with a Lower Income, one reader commented:

I agree with your original commenter, and would personally like to see more stories of people who make AVERAGE incomes because they love teaching elementary school, or working as a substance abuse counselor, or massage therapist or whatever.

There are millions out there to whom even a $50k or 75k salary seems, and probably is, out of reach. But *there are* still stories out there where average earners do really well in accumulating wealth, by upping their savings/investment games. Instead of just saying “yes, it’s possible, obviously, let’s look at some math” — why not find and feature them?? It would not undercut your ESI model, imo, to show some people who have limited E.

A few comments on this:

Now that I have that off my chest, let’s move on to the reason for this post — actually showing examples of people with low to average incomes who became wealthy.

We’ll begin with this AOL piece that highlights “everyday millionaires” (which is an interesting name since their first example has less than $1 million). Here’s how they intro the post:

There is the neighbor on the other side of our house — attracting very little attention, driving her 10-year-old car and walking her 8-year-old dog. What we don’t know is that she’s sitting on a retirement war chest of more than a million dollars, accumulated while she toiled at an ordinary job.

It’s easy to assume that really fat bank or brokerage accounts are only for the wealthy and that the most we can hope for is to just get by. If you’re earning, say, $45,000 per year and can’t hope for much more than annual raises of 3%, it can be hard to imagine a comfy retirement.

Then they go on to share the stories of people who have done just this — become wealthy on a small to average income.

Next is a story from The Washington Post. The highlights:

Ronald Read, a Vermont gas station attendant who worked in retail later in life, was a frugal man.

He died a multimillionaire at 92.

Read had stock holdings and property valued at almost $8 million, most of which was left to Brattleboro Memorial Hospital and Brooks Memorial Library in Brattleboro, Vt., Howard Weiss-Tisman reported in the Brattleboro Reformer.

“Not only did he refuse to flaunt his wealth; his estate included a 2007 Toyota Yaris valued at $5,000, but his closest friends and family members did not know he had even a tiny sliver of the fortune he left behind,” Weiss-Tisman wrote.

CNBC’s Michelle Fox explains how a man earning a modest income could amass such a fortune. Fox says one expert said, “Investors would have to invest about $300 a month at an 8 percent interest rate over 65 years.”

This is an example of what it means to live below your means and to invest for the long term.

“I think this shows what can be done if you have a plan and work at it,” wrote one reader, who alerted me to the article.

$8 million is not bad at all. Then again he had a long, long time to let that money compound, so no wonder it became so much.

Next is an example from Free Money Finance. The story is of a social worker that amassed a $1.4 million net worth. Details are:

She drove a 30-year-old car, watched an ancient TV, lived four decades in a house bought with cash in 1969, and just kept stacking charity donation envelopes in her sun room, until, once a year, she sent them all in.

[She] saved because spending more just didn’t occur to her.

She dressed plainly. She wore costume rings. She dyed and permed her own hair.

The house furniture was her parents’. She resisted replacing the old TV and icebox. And when she went out with friends, they nearly always split the bill.

When she died, coupons waiting to be clipped still covered her dining room table.

“Always, always. She’d reach into her purse, pull out a handful of coupons, and ask me where I wanted to go to lunch,” said Brueggemann, her co-worker.

Buri even looked for deals within deals. For instance, she would buy five sandwiches for $5.95 from Arby’s. She’d eat one and freeze the four others for later.

Nor did she deny herself small indulgences. Some weeks, she ate out three meals a day, friends said. She traveled to Europe, and to the Rose Parade in California. She bought a baby grand piano. There was nothing she wanted and didn’t buy, said Brueggemann, the co-worker.

“She was frugal because she didn’t need anything else,” she said. “She wanted that old car. She dressed the way she wanted to dress.”

The next one comes from the Wall Street Journal. The highlights here:

Jimmie Dean (not to be confused with the sausage magnate) worked for 33 years as a technician at Phillips Petroleum. The most he ever earned was around $50,000 a year.

But he scrimped and saved and invested in mutual funds. When he died in 2008, he had more than $2 million in the bank. His bequest was to set up a scholarship fund.

“He did it through being frugal with his money,” said Mr. Dean’s nephew, Bob Boyd, who now runs the Jimmie Dean Foundation.

We move on to this piece from Get Rich Slowly where JD Roth (now at Money Boss) interviewed a millionaire friend of his. The details:

John is a 71-year-old retired shop teacher who lives in a modest ranch house on half an acre, the same house he’s had for over forty years. He has an old barn filled with salvaged lumber, outdated appliances, and who knows what else. When he’s around, he drives a junkie 25-year-old station wagon.

Throughout the article John gives JD tip after tip on how to live frugally (and thus amass a fortune).

Back to Free Money Finance with this piece. It gives the story of a man who became wealthy on $20k per year. The highlights:

“I did it with good old-fashioned nickels and dimes. My mother taught me how to budget, which made me appreciate how a little money can grow. I saved what I could from odd jobs, such as lawn cutting and window washing, that I did in addition to my day job.”

Now we move on to Dave Ramsey who tells this story of a millionaire couple:

Even though they didn’t have a huge salary early on, the pair established their saving goals and then lived a modest, comfortable life year after year. In fact, their household income over the past two decades only averaged around $70,000.

But because they invested early and often, the power of compound interest began to seriously multiply their nest egg.

Becoming a millionaire doesn’t take a silver spoon—it takes an iron will.

“You can build wealth,” Shawn says. “It doesn’t take a college education, and it doesn’t take someone who has wealthy parents and inherits a lot of money. It’s really about putting in the work, having a plan, and working together to make that a reality.”

Dave also has this story of another millionaire couple:

Jeff and Dee of Atlanta have a net worth of $2.8 million. But they didn’t win the lottery. They became wealthy after decades of smart saving and sensible spending.

When he began working as a computer technician decades ago, Jeff’s salary was just $13,000. So when the opportunity came to work extra hours, he jumped at it. His workweek went from 40 hours to 80 hours—and his income doubled in the process.

These days, the couple saves upwards of 25-30% of their household income for retirement. How? They don’t hoard money, but they also don’t waste it. They still shop at Walmart and buy $20 shoes. They’re just normal folks.

“It’s probably been five or six years since we’ve been millionaires” Jeff says. “But again, it didn’t change our lifestyle or what we did or how we did it.”

To them, being a millionaire isn’t about hoarding your money. It’s about securing your future. It’s about leaving a legacy for your kids and giving generously. And it’s about enjoying the rest of your life without worry.

Should I keep going?

I actually had a lot of fun surfing around to find these people. They had interesting stories, all of which boiled down to these three findings:

Funny how these three popped up, huh? Earn, save, and invest. And if one is low, you need to be pretty good at the other two.

I think I might have mentioned that at least once previously. 😉

P.S. I wrote this post a few weeks ago and had it set to go today. Last night I found this piece from Money magazine on how to become a millionaire on an average salary. The highlights:

If you earn that median $56,516 salary and contribute $5,500 of it to an IRA each year, you’re getting pretty darn close to that ideal 10% savings target. Now let’s assume you start saving $5,500 a year, or roughly $458 a month, early on — say, at age 27 — and you continue doing so until age 67, which is what the Social Security Administration considers full retirement age for anyone born in 1960 or later. Let’s also assume that you invest that money and take in an average annual 8% return over 40 years. Because IRAs offer tax-deferred growth, you won’t pay taxes on your earnings until you reach retirement, which means you get to reinvest your total gains year after year. So if we take that $458 monthly investment and apply it to a 40-year term, we arrive at a grand total of $1.4 million, and it’s all possible thanks to the power of compounding.