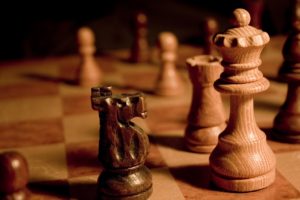 But in the worst sort of way. I love chess but am terrible at it. At least compared to most people who consider it a hobby. That’s because I usually only play blitz chess, a quick version where the time allowed to move is severely limited. The long version just takes too much time for me. Which makes me not a great player as I’m not a deep, strategic thinker (at least when I play chess).

That said, I still love it. And because I’m retired, I get the chance to think about it and play frequently.

I’m also thinking about money frequently (you have to as a financial blogger). Combine the two and we get yet ANOTHER post on how chess and personal finances are similar. (My first one was Playing Financial Chess in case you missed it).

For those of you who don’t know, there are three phases to every chess game. Here’s a good summary of them:

I know. You are salivating at this newly found knowledge that you probably care very little about. But stick with me. 🙂

As I was considering the above it struck me that there are three phases of wealth as well. I’d list them as:

See! Money and chess do mirror each other! 😉

The three phases of my financial life have happened this way:

How about you? What phase are you in and what are you doing there to get to the next phase?