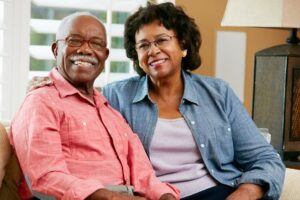 So far we’ve covered several parts of this book. If you missed any and want to catch up, please start with the first post, The Problems with Retirement, and then click through to read the rest in order. Or you can check out my retirement category and scroll through the posts there.

We’ll cover two chapters today, both about relationships in retirement.

The first chapter is about friends and family — basically having a social life in retirement.

The second is more personal, discussing marriage in retirement.

Let’s begin with these thoughts on social relationships in general:

Friendships and social interaction are extremely important for psychological well-being regardless of age and life stage. They contribute to our feelings of personal meaning and value and, by creating a sense of membership in the community, can help to maintain and reinforce our own identities and validate our thoughts and actions. They can be a refuge in time of need, providing emotional support and comfort and a sense of being accepted and loved by others. Additionally, to the extent that social interactions are planned (e.g., things like meetings, functions, and other gatherings that occur at a set time), they provide schedules that can help to add structure and meaningfulness to day-to-day living. Finally, we might also point out that a social life takes on even more importance after leaving one’s job, at which point the opportunities to feel good about one’s accomplishments may not be so handy.

The results of our survey clearly showed a link between a well-developed social life and better overall quality of life and, more to the point, better adjustment in retirement. Well-adjusted retirees seem to put more effort into developing and maintaining relationships, in terms of both time and emotional attachment, and their efforts have paid off in a greater sense of connectedness the world. Apparently, it’s not just the size of one’s social circle that matters but also its composition—well-adjusted retirees tend to be less exclusively reliant on family members for their social needs. Specifically, we found the following concerning well-adjusted retirees as compared to their less well adjusted counterparts:

1. Well-adjusted retirees are more likely to have friends outside the workforce and are likely to have more nonwork friends in their social circle. They spend more hours per week interacting with their friends, have increased the time they spend with them since retiring, and tend to be more emotionally close to their friends. In contrast, for the less well adjusted, family members — and especially their children — take up a greater proportion of their socializing time, and they tend to have stronger emotional connections with family members but weaker ones with friends.

2. Well-adjusted retirees are more likely to belong to clubs and organizations and spend more hours per week at their clubs. The less adjusted in contrast, actually spend less time at their clubs in retirement than they did while they were still working.

3. Well-adjusted retirees are much more likely to be satisfied with their social lives, more likely to feel connected to the world, and much less likely to say they feel lonely. The less adjusted, on the other hand, feel their social circle is too small, and although they realize they spend too little time interacting with friends, they also acknowledge that they have spent less time with them since retiring. They are also less likely to have made new friends since retiring and are less motivated to do so in the future. These retirees are also more prone to think their social lives have gotten worse since retiring.

Ok, so that’s how important social connections are.

But what about how to grow social connections — especially if you feel you need help in that area?

The book ends chapter 12 with the following suggestions:

Joining clubs and senior organizations is one option, but if this is not to your taste, starting your own retiree club may be something to consider. This may initially sound silly, but if each retiree knows another retiree who knows another, soon a great many retirees will be connected — enough to meet most anyone’s social needs. Such “clubs” can be established on a theme basis, such as dining, wine tasting, or golf, allowing retirees to meet others who share the same interests.

As another option, retirees can consider taking on some kind of work, either salaried or as a volunteer, specifically for the social benefits. That means, of course, that such a job should not be one that is worked from home. We have found that, while those with a satisfying social life are no more likely to hold a salaried job, they are more likely to work as volunteers, and they are more likely to have taken a salaried or volunteer job specifically for the social opportunities it provides. But whatever path is chosen, the key is to stay motivated and do something on your own to find people who share your lifestyle and your interests.

Now we move on from general social connections to likely the closet connections most of us have — marriage.

The book kicks off this topic with the following:

Most of us would probably agree that being married or having a significant other in one’s life is a good thing that adds to subjective well-being.

Intimate relationships provide regular companionship and emotional support. For retirees, they serve an additional purpose: they help in the adjustment process by providing some continuity in an otherwise disrupted life. Additionally, although it can be overdone, researchers find that couples tend to welcome the greater opportunity to participate in activities together.

Of course, that’s as long as the marriage is a good one, but, unfortunately, not all are. Retirement and marriage are what might be called “mutual influencers.” In other words, research has shown that intimate relationships can help (if good) or hinder (if bad) retirees’ adjustment, and the act of retiring itself can either strengthen or weaken a marriage. The emotional ups and downs that can accompany the retirement adjustment process can make their presence strongly felt in retirees’ relationships. Furthermore, with the change in roles and the added amount of time spent together, there is a good chance aspects of the relationship will be altered, perhaps substantially. On the positive side, retirement can make a happy marriage even better.

Lots to comment on here already but let’s share a bit more before we get into it:

When compared those in happy marriages to those in less blissful relations survey showed the following:

1. Happily married retirees tend to spend more time doing things together and have more active sex lives. They also had much more positive in-going perceptions about retirement but were also more accurate in their expectations. They were better at planning their retirement, particularly in terms of how they would spend time with each other, and report a much more positive quality of life overall.

2. In contrast, those in unhappy marriages are much less likely to describe their relationships as intimate, connected, or comfortable and more likely to feel their relationships had gotten worse since retiring. They are unhappy in retirement, feel the quality of their life has worsened and wish they were back at work. They are much more likely to feel depressed and feel their sex life is poor and has gotten worse since retiring and are less satisfied with how their lives have turned out.

As we wrap up this section, the book has the following to share with us:

Simultaneous retirees are happier and better adjusted in retirement, report a better overall quality of life and happier marriages, and are more prone to think their marriages have improved with retirement. They are also more socially involved and connected, feel they have direction in their lives, and are better able to find interesting things to do.

In contrast, those with a working spouse spend less time in joint activities and are more likely to complain they do not spend enough time with their spouses. They are more likely to feel lonely and to be less involved with other people, are less happy overall, and are less committed to stay in their marriages in the future.

More of the same really.

So what should married couples do to make the best of their relationship in retirement?

That’s it for this time. We have just a couple more posts on this book, so stay tuned as we approach the finish line.