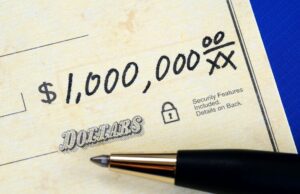 Hahaha. I couldn’t resist on the title for this one.

But once again, compounding has shown us its massive power and I simply needed a way to emphasize that.

The First Million is the Hardest

Several years ago I wrote a post titled The First Million is the Hardest.

Some say that hitting your first million in net worth is harder than hitting subsequent million-dollar milestones. This post examines whether or not this is true.

Short story: it is true.

That’s because in getting to the first million you are doing all the heavy lifting yourself. You are having to save a ton of money. And that money has relatively little time to help you grow it into more.

But once you get the first million, you keep on saving PLUS that first million starts working hard for you over time.

Next thing you know you have $2 million!

Now you’re still saving but you have $2 million helping you out!!!! It’s a wealth snowball!!!!!

When I wrote that post (which was near the time I retired), I had reached $3 million in net worth.

My milestones were as follows:

As you can see, things got much easier over time.

As I write this, my net worth is now over $6 million, so I’ll add the following to what I have above:

Ok, there are a few things screwy in these numbers (which are my “official” end-of-month numbers from Quicken) that don’t make every million easier than the rest.

Here’s what’s going on in my case:

But the general principle is correct: each subsequent million is easier to achieve than the last one.

If I had updated estimated the real estate values each year, my net worth growth would probably look something like this:

Millionaires Have the Same Experience

In the Millionaire Money Mentors forums we had a discussion about this principle and the general consensus was that it’s true.

Some shared their net worth progressions to illustrate the fact and I want to highlight a few for you.

Let’s begin with this one:

So many in the forums are doing better than I did at an earlier age. Bravo for them!

This mentor actually listed how he made each jump as well — what percentage was attributed to savings and what percent was from investing.

You can see how investing becomes more important as the numbers get larger. Compounding does its thing!

I do think that investing is even more important than what’s shown here and I made this comment in the forums:

I think these numbers are more indicative of a VERY high income. Most millionaires make in the $250k range (median). You are at least 3x of that, thus income is a bigger portion of your gains.

For someone who made “only” $250k per year, I would expect investing to be a larger share of the gains earlier in the journey.

As I said, there are some really smart cookies in the forums. Hahaha.

Yet one more strong performer.

And one last one for today:

You may be reading this and thinking, “Ok, so what’s the big point here?”

The point is an encouragement for you.

You might have less than $1 million right now, think you need $3 million or so to retire, and might be getting frustrated.

Perhaps you’re thinking, “It’s taking me so long to get to $1 million! I’ll NEVER get to $3 million!”

The point here is: Don’t give up! It gets MUCH EASIER!

Work to get to that first million by earning, saving and investing. Then you’ll have a buddy (your $1 million buddy) to help you get to the second and third million much easier and faster than it took to get to the millionaire level.