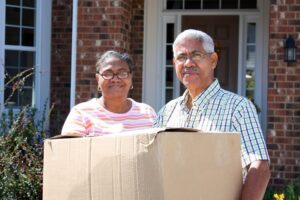 In case you missed the first two posts in this series, check out Basics of Retirement Planning and Working or Volunteering in the New Retirement.

This post will address the book’s thoughts on where to live in retirement.

I’ll share their take and then add my comments.

Most Stay Put in Retirement

Let’s start with this introduction from the book:

Despite the popular image of seniors flocking to Florida or Arizona, about 90 percent of those over the age of sixty traditionally have stayed put in retirement for the simple reason that we like the familiar.

We enjoy being close to family and friends; we like knowing where to get our car fixed and how to reach our doctor.

“90 percent of those over the age of sixty traditionally have stayed put in retirement.” I’m not over 60 yet, so I don’t qualify for this group. LOL.

Or another example: I’m 63, still working, move, then stay put when I retire.

Or maybe I’m over-thinking it.

However it really sorts out, it’s very likely that most people find a place they like, live and work there, retire, and don’t move again.

This is how it has been historically — and I can see why.

I certainly like the familiar (my gym, church, local grocery store, etc.)

We also like being close to our kids. They are in Colorado Springs, so there’s little reason on that front to move.

In fact, author Wes Moss says that one habit of happy retirees is living close to at least 50% of their children.

That said, it appears what’s been normal might be in for an adjustment.

Attitudes, though, are changing. Baby boomers, in particular, say they’re more inclined than their parents to pull up stakes in retirement. Some surveys estimate that as many as one-third to one-half of retired boomers could be filling our change-of-address cards. Even if those figures prove to be exaggerated, the sheer size of this generation means that millions of Americans now in their forties fifties and early sixties, will end up relocating in retirement.

An individual’s ties to the workplace tell a big part of the story. Historically, if you worked for the same company in the same town for thirty years, chances were good that you wouldn’t venture far in retirement. Boomers, by contrast, are more likely to have worked for several different companies in several different locations; thus, their ties to any one community may not be as strong as those of their parents.

More retirees could also end up relocating because they have to — because their nest eggs are just too small for the lengthy retirements that lie ahead. For relief, people are turning to an asset that has jumped significantly in value: home sweet home. Selling your house and buying another at a lower price will be one way to reduce the strain on your savings and free up money in retirement.

Four Issues to Consider before Moving

The book now discusses the four issues to consider before moving:

Most of us have fantasized about settling in “paradise” when we retire: the beach or hillside that we love or the vacation spot that never disappoints. But before you pull up stakes, here are four important issues to consider and how one couple handled each:

As we’ve considered a possible move from Colorado, here’s how we’ve been thinking of these four issues:

We are still probably 2-3 years away from making a decision to move (or not) and a lot could happen between now and then.

One key will be how our time goes down there this winter. This time we’ll be going as experienced snowbirds and will have a different lens to look through — including living in a different area of the community (though fairly close to where we were before). We’ll see how it goes. I plan on doing monthly updates while we are down there, so stay tuned.

Deciding Where to Move

Next the book lays out some criteria to consider before moving:

All right. You think – or know – that a move is in your future. What follows are the Big Seven factors you should consider in finding a community that fits your needs.

Here’s how we see these at The Villages:

After looking at that list, you can see why The Villages are rated highly for us.

Before we leave this topic, the book has these final words:

At some point – once the list of possible destinations is narrowed to two or three finalists – it’s time to visit each spot.

The first trip might last a week. It will give you a chance to drive through neighborhoods, dine at local restaurants and get an initial impression.

Assuming that the first visit is promising, the second trip should last two or three weeks and take place during a different time of the year. At this point, it helps to talk with prospective neighbors and real-estate agents.

Finally, if you think you have found your retirement home, book a short-term rental and visit for two or three months. If you still like the community, put up the “For Sale” sign back home.

Hahahaha. We jumped straight to the last option — “book a short-term rental and visit for two or three months.”

This was a combination of several things:

I’m making it sound more rosy than it was while we were going through it. In fact, initially we were a bit unsettled and wondered if we had made the right decision being gone from home for so long (especially with no one living in our home).

But over time the place grew on us, we started to get into the flow of things, and so on — so much so that my dad decided to buy a place down there. So we really saw the advantage of doing what the book recommends: “book a short-term rental and visit for two or three months.”

When we go in 2023, we will know what to expect, know where things are, have some friends down there, etc., so it will seem more like going home than taking a vacation (we have experienced this feeling in many places we’ve returned to a second time (like Grand Cayman)). Plus we will have someone staying in our house here in Colorado, so that worry will be off our plate as well.

Time will tell what we do, but I’ll keep you informed.

So what about you? What are your plans (or at least ideas) for where to live in retirement?