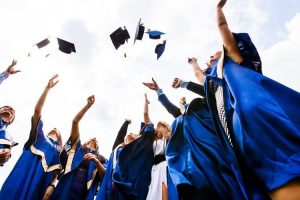 Ok, so maybe the title is a bit over-the-top, but I’m feeling kind of over-the-top today.

Plus I am so proud of what my daughter has accomplished that it’s fitting.

Anyway, today I’ll give you an update on my daughter’s college career, including her car decision (which is somewhat related), and give you a picture of her finances at the end of it all.

To catch everyone up on where we started, we offered our kids a car incentive and a college incentive.

The gist of each incentive was as follows:

The reactions from each child were quite different. As almost any parents know, kids raised in the same family environment are almost always completely different in many ways.

My son’s attitude was along the lines of, “It’s too much work.” He’d rather we just give him the money for doing nothing. LOL!

My daughter’s attitude was along the lines of, “I want the maximum amount…and more if I can get it.”

Now let’s explore what my daughter did to try and get as much as possible.

In her early teens my daughter had a TERRIBLE time with sweets. She ate candy, cakes, etc. plus drank soda every day and in quantities that rivaled mine in my “glory days”, which is saying a lot.

It was impacting her health but she wouldn’t stop. Then she went to the dentist and had 10 cavities, and we had had enough.

So her incentive was to eliminate sugar. Not all sugar, of course, as there’s sugar in everything these days. But she couldn’t have the refined sugar treats like candy, cookies, cakes, soda, and so forth.

One year. No sugar.

As you might be able to tell from the above, she’s kind of determined, so once her mind was made up, that was it. She had no sugar for a year and we owed her a new car.

We had previously agreed that the cost of a new car would be $25,000. After she met her goal, we made another offer since she wasn’t sure she wanted a new car.

The new offer was she could either get the car or we’d give her the money. She took the money.

Not literally though. We kept it and allowed her to draw from it as she wanted to spend (and as you’ll see, she did spend).

I would watch her checking account and as it got low I would replenish it from her fund. Or sometimes she would have a larger purchase (like a computer), need that money, and I’d shift it over. I tracked the withdrawals through Quicken so I always knew her balance.

BTW, we set up the incentive for 2016, and she didn’t have access to it until mid-2017 when she decided she’d rather have the money.

One thing that helped convince her to take the money, buy a used car, and pocket the difference was our $10 car.

From the time we got it she drove the car most of the time and thus didn’t need to buy a new car. Then she fell in love with the $10 car, decided she wanted it, knew it was much more affordable than a new car, and we discussed how she could get it.

More on this later.

As for the college incentives, there were a few rules in addition to the ones above:

With these in mind, she took several steps that helped minimize her college costs:

By doing these things she:

Not bad, right? I had a pretty good college career and her’s makes me look like a slacker.

So, where does this leave us money-wise? Here are the results as of her graduation:

With all that said and done, she ended her college career with no debt, a car, and $41k in cash.

The $5k for the car was set after some negotiation as there were several numbers in play. Some meaningful ones:

So with these we basically decided to meet between what we had in it and what it was worth, This seemed fair for both parties.

Now we come to the fact that we owe our daughter $41k. How do we get it to her?

It looks like we can “gift” $15k to anyone in a year and not owe taxes on it.

I’m not sure this would be considered a gift, but I didn’t want to take any chances. So at the end of 2018, my wife gave our daughter $10k and I did as well.

Again, maybe we didn’t have to break it up this way, but I’d rather be safe than sorry.

My daughter graduated in early December and I flew out to pick her up. We drove home together the next day.

She looked for some jobs online and did some networking after we got home but:

Plus she didn’t seem to be too worried about finding/getting a job, so little progress was made. That’s what $41k in the bank can do for you. The sense of urgency has passed.

That said, she is working for me doing several things at Rockstar Finance. She’s organized and web savvy, two things I need, and I might as well pay her as anyone else.

She also works for a set of other sites, doing tasks very similar to what she does for me.

She really just needs one or two more sites to work for as a “social media manager” to make up a full-time job. Given that the web jobs are mostly flexible in time and location, I think this is the direction she’s heading in. Whatever she does, she’d like to stay in Colorado. Our state has a way of making you love it. 🙂

Earlier this month she moved in with a friend and another roommate (both women). The friend was tired of paying high rent, bought a house, and wants a couple roommates. My daughter pays $600 a month for room and utilities, which is not bad. They live about 15-20 minutes away from us and we still see her at least once a week at church.

We’re in the process of detaching her from us — new checking account, new car insurance (on her own), and so forth — which will take some time, but for the most part she’s left the nest completely. It’s bittersweet, of course, but we are so happy that she’s well on her way to making her own way.