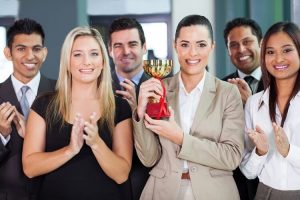 In How to Ask for a Raise, I listed “after you get an award” as one of the best times to ask for a raise.

I also promised to write more on the issue. Consider this post the fulfillment of that promise. 🙂

Saying that someone should “get an award” sounds easy, but it leaves a ton of questions. The most obvious is, “How do I get an award?”

Well, I happen to have some experience and thoughts on that question.

What is a Career Award and Why Would I Want One?

Before we discuss how to get an award, let’s spend a minute or two talking about what it is and how it can help your career.

A “career award” or simply an “award” includes the following:

You’ll also see people and companies recognized for things like “Best of Colorado Springs” and the like.

Basically an award is an organization or group saying that you’re great for a specific reason or performance.

The reason you might want to receive one of these is because they can have a significant impact on your career and lead to big income gains.

Look at it this way: an organization is saying you are excellent for some reason. If leveraged correctly, this recognition can help you in your current position (in asking for a raise, for instance) as well as with potential future job hunts (it looks VERY nice on a resume and basically serves as a very well regarded reference.)

For these reasons you can see how getting a work-related award can be quite beneficial since it allows you to ask for more money and ultimately make millions more in your career.

Two Ways to Get an Award

There are primarily two ways to get a career award:

The “old-fashioned” way of getting an award is simply having someone recognize your accomplishments and giving you an award.

I’ve received a few awards this way — some very valuable and impressive — and they are very nice surprises.

However, you can’t bank on these. They come out of the blue when/if they do come and are few and far between. They are certainly not anything you can count on to arrive just as you are preparing to ask for a raise or looking for a new job.

That’s why I recommend the second option (which will focus on in this post). These are a whole different set of awards and are usually handed out by associations, clubs, magazines, and the like. The key to getting one of these awards? Apply for them.

You won’t win every award, but this is a numbers game — the more you apply for, the better chance you’ll have of winning.

Of course you have to have the goods — you must show some accomplishment in the area for which the award is being given. But assuming you do, and that you can write well on an application form, you’re just a few submissions away from claiming an award for yourself.

And once you do, you can cash in on them for a long time afterwards.

BTW, I never knew how many actually applied, but the sense I got when they conducted the post-awards interview for the magazine was that it was 50 to 100 people. I had beaten out 50 to 100 people for the title of the best in the country. Not bad.

What were the keys to winning? Of course I had some accomplishments, but I assume many others did as well. What I had was 1) the willingness to apply (it took a whole Sunday afternoon to write my application and I remember almost giving up on it because I didn’t think it was worth it) and 2) the ability to write persuasively and compellingly. I could make a marketing promotion sound like the invasion of Normandy in both scale and success!

A couple years later, I was given a new job offer that I was under-qualified for by several years (I had about 30% less management time than they wanted.) But since I had won a prestigious national award, they offered me the job – and I received a nice pay bump as well (somewhere in the neighborhood of a 20% increase). Yes, taking the extra time to apply for that award certainly paid off.

A few years into the job noted above, I was recognized as “the person who had made the greatest industry impact that year.”

This one was a complete surprise and I remember being shocked when they called my name. My company also won several other awards that I played key roles in. But again, these were total surprises.

What was not a surprise was previously I had submitted an in-store display I developed into a competition hosted by our industry’s top trade publication.

Again it was a rather long application process and I was tempted to let it slip by, but I plowed on, submitted the application, and won the award.

Perhaps this award set the stage for the one to follow and perhaps it did not. I’ll never know. But what I do know was that award for the best in-store display was in-and-of-itself a solid accomplishment and remains on my resume today (as if it matters at this point — but just saying it was important enough to benefit me in the following years all the way to today).

Several years later, I had moved on to another job.

As part of our marketing efforts we developed a public relations campaign. Funds were tight and a PR effort was a great way to get cost-effective exposure.

One of our programs got some special attention from the national media. I didn’t think it was that big of a deal but our agency asked if they could submit our program for a regional PR award. I gave my approval and low and behold we won “best of show” that year. I still have the trophy on my desk.

I was able use these awards along with my work accomplishments to build a very strong resume. Coupled with good interviewing skills, I was able to parlay these results into a great new job (best job I ever had at much higher pay) at a time when my current job was killing me.

The Benefits of Career Awards

It might be obvious by now, but let me summarize the benefits of getting a career award:

1. Great career builder for your current job. If you get a career award, you’ll notice that all of a sudden you become at least 50% smarter. People listen to you more. They seek your counsel. They actually do what you suggest. And best of all, bosses are much more willing to listen to pay increase appeals.

2. Great career builder for new jobs. All of the awards above are still on my resume and LinkedIn profile. It’s because they add tons of credibility and support to the notion that I’m a person who gets things done in a big way (whether that is true or not, we won’t discuss). Very few things can make a resume stronger than a great award from an outside entity. And using these in the right way helps you get better jobs at higher pay.

These two factors can lead to multiple pay increases (over several jobs/companies/promotions) and can have a significant positive financial impact on your earning ability.

It’s hard to put a dollar figure on the value of my awards as it’s impossible to separate the various factors that lead to pay increases, but I would say they were certainly worth at least thousands of dollars in extra income. You could reasonably say they were worth tens of thousands or even a hundred thousand or two. And they were free to obtain! Even if there had been an application fee and I didn’t get every award I applied for (which I didn’t), the pay-off was astronomical.

So get out there, look around for awards in your industry (trade magazines are great places to find them), and apply, apply, apply. Who knows, the award you win today could net you a big pay increase (either with a new employer or with your current one.)

Anyone else had any experiences with awards? Did they help you get a raise, promotion, or new job?