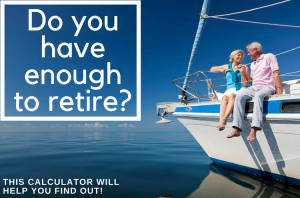 I get a lot of questions about retirement.

This might not come as a surprise to you since I write so much about the topic.

Most of the questions are one of these two: 1) When can I retire? (Yes, literally that simple.) and 2) I don’t think I have enough to retire. What do you think? (This is really just another form of the question above.)

I have penned several posts attempting to address these questions including:

You would think these would do the trick for most people, but admittedly they don’t exactly answer the question. It’s because they are general examples and don’t address a person’s individual money situation. How can they?

Well, now I have a place to point people who wonder if they have enough to retire. Today I am introducing my “When Can I Retire?” calculator.

This calculator is not meant to be a sophisticated financial planning tool.

Instead it’s designed to give a ballpark estimate of when you can retire (which may be today, BTW) which, when coupled with some margins of safety, should give you a sense of how close you are. From there you can make detailed plans and do a bit more planning and work.

And for me, I now have a place to send people where they can run their own numbers. It’s awesome. 🙂

Let’s begin with the calculator itself, then I’ll add explanations below on how to use it (in case some have questions) plus some suggestions on speeding up retirement/financial independence.

Like other calculators, this one begins with inputs. It starts by determining your retirement spending and income as follows:

Next we move to the assets that will help you retire. The inputs include:

Once you have all these inputted, you’re ready for the results.

Once the inputs are completed you’ll see big, bold letters that read:

YOU ARE ON TRACK TO RETIRE IN:

And then there’s a red bar which will give you the answer (in years)!

That is unless you’re already there. In that case it’ll tell you that instead. 🙂

Once you have the results, here’s how to think about them:

It’s not rocket science, but a simple, basic guide to get you started on your path to retirement.

How to Retire Early (Or Reach FI)

The tips to making retirement/financial independence happen as early as possible are pretty clear from the calculator and we’ve discussed them quite often on this blog. But just for the sake of being clear, let’s quickly review ways you can retire as quickly as possible:

So that’s it. Test it out and let me know what you think.