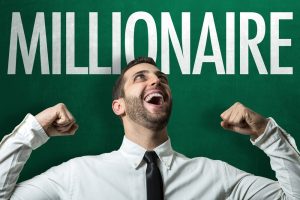 I originally had this post planned for “Be a Millionaire Day.” (Yes, they do have a day for everything.)

Then I moved things around (I wanted other posts to publish sooner) and messed it all up.

So consider this a belated tribute to Millionaire Day with a post on what we’ve learned so far from my millionaire interviews.

Between this site and my former one I’ve interviewed over 40 everyday millionaires. Not surprisingly, there are patterns in their answers regarding how they became well off.

So let’s look those over as I’m sure we can learn something from these wealthy individuals.

What Millionaires Have Taught Us

Here are the main lessons millionaires have taught us:

As you might imagine, these findings mirror the ESI Scale and the theme of this site. Funny how that turned out, huh?

Seriously, it’s because these principles work. Apply them over years and you will become wealthy. That’s all there really is to being a successful money manager.

Doing the Right Things and Avoiding the Bad

In addition to those main three qualities, there are a couple other things that millionaires seem to have in common:

Since it’s Millionaire Day, let’s go crazy with all things millionaire-related. So here are a couple resources:

And to top things off, here are some facts about millionaires according to Wikipedia:

Some of you might be yawning at this point. Heard it all before, right?

My challenge to you is to ask yourself which of the tips above you are missing. Which of these can you attack and get just a bit better at over time?

My focus these days is on investing more than the other two ESI steps. Specifically, what can I do to manage my investments so they perform better?

So let this be my encouragement to you: develop a plan, work at it, stick with it, and you will become wealthier. Start now and by Millionaire Day next year, you will be much better off than you are today. Perhaps I’ll even be interviewing you then for my millionaire series. 😉