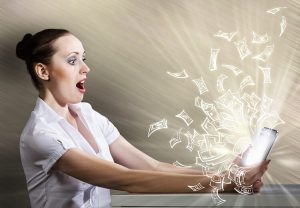 When we were married in the early 90’s, my new wife and I hatched a plan.

We knew that time together would be scarce (we both worked and my hours were especially brutal) so the limited time we had we wanted to spend together.

We also wanted to help other people and volunteer through our church.

After asking several older and wiser people for their advice, we decided to join a program that offered financial help to those in need.

We took the training (which would resemble Dave Ramsey’s Financial Peace course today) and before long we were counseling people with major money problems. Mostly we worked on creating budgets, getting them out of debt, and the like.

Even with the big drop off between “person with a problem” to a “person meeting with us” that I’ve discussed previously, we still had many people to serve.

Over and over we saw the results of over-spending and living way above your means. For several years we saw examples of what not to do with money. It was very good training for us. We could learn from others’ mistakes without actually making the mistakes ourselves.

But that was only part of what we needed. We could see what not to do — the things to avoid — but what should we do? What actions should we take to grow our net worth?

I began to look around for guidance. I read several money books that offered “ok” suggestions but nothing really stuck. Then in the mid-90’s I ran into a book that would change my life: The Millionaire Next Door

My Money Life is Changed Forever

I think it was the down-to-earth message that resonated with me. Becoming wealthy wasn’t that difficult. In fact, the book showed that a lot of “average Joes” were millionaires. All you had to do was apply a few, simple principles (seven to be exact), give it time, and wealth would be yours.

We started applying those principles to our lives (with me playing good offense and my wife playing good defense) and the rest is history.

Over time I would run into several other life-changing money books, but I always had a special fondness for The Millionaire Next Door. It was the book that opened the others to me. I often told people to, “Read the book, do what it says, and then become wealthy.”

And while I never met him, I always considered the book’s author, Dr. Thomas J. Stanley, as a mentor of mine. And why not? He had given me something that had changed my life in such a positive and dramatic way. I’ve always been thankful for what he did for me.

Dr. Stanley was planning on updating his book for its 20th anniversary, but tragically he was killed by a drunk driver in 2015. His daughter, Sarah Stanley Fallaw, then took up the task of looking at The Millionaire Next Door 20+ years later to see how millionaires today compared to those in the 1990’s.

I can’t remember when I was this excited to get a book. When it finally arrived, I was thrilled!

I don’t want to spoil the excitement for you, so I won’t share all the details. But I would like to point out a few highlights to give you a flavor of what to expect.

As you might imagine, the book calculated another round of major stats on millionaires. Here are some of the factors that make up today’s “average” millionaire:

I’m closing in on my 100th millionaire interview. When I hit the century mark I will be summarizing what we’ve learned about millionaires so far.

What It Takes to Become Wealthy

Like the original, the new book offers advice on what people can learn from millionaires to become wealthy.

It lists six activities as “requirements for those who seek financial success” which include:

There’s some really good stuff in each one of these and the book dedicates a chapter to breaking down each thought into details.

My Take on the Six Activities

As you might imagine, I have some thoughts related to the above:

You’ll have to read the book and dig a bit deeper for even more insights — these are just the tip of the iceberg.

A couple other noteworthy mentions I want to share include:

Overall I would say that the book’s findings are similar to what The Millionaire Next Door told us all those years ago. But as thinking around money has changed, so have millionaires, their actions, and how they achieve wealth.

This book offers the perfect blend between the history of the first book and the changes of the past 20 years. I highly recommend it and hope you enjoy it as much as I did.