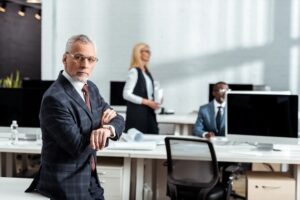 If you’ve read this blog for more than 30 seconds you know how important earning is to your financial success.

After all, “E” (for earning) is the first letter in the site’s name. There’s a reason for this — earning was one of the three vital steps I used to become wealthy and retire early.

Then of course there are the millionaires I interview. Many of them have built high incomes over time. Though this fact rankles some readers, it’s a simple math equation. Run the numbers and it will become apparent that it’s easier to grow your wealth through saving and investing when you earn more.

Before I started ESI Money, I had another site (two actually) where I started to interview millionaires (before I transferred everything to this site). I was chatting via email with one of the millionaires and his career story impressed me. I asked him to write it down so I could share it with my readers.

That’s what I’m posting today. Here are the career highlights (followed by my comments) from a man who earned $320k the year this was sent to me.

Here are the details in his words:

It started very early, back in my college days. I did more than try to be a student getting a degree, I tried to take on meaningful jobs that could expand my skill base and make me more attractive to employers, while of course making money to pay for my schooling and life.

I went to a large public university. As soon as I was eligible, the summer after my first year, I became a Resident Assistant (RA). Strongly recommend this job. You have to deal with all sorts of diversity of folks. It helped me with my housing and some food.

During one semester I did an internship at a company to get real world experience, this really put me in high gear in school since I learned how easy we had it in school since it was just a few hours of class/studying a week. I started to get more focused on my career. I was an RA every semester I was in school until I was able to become a Hall Director (over an entire dormitory, not just a floor as with the RA role), this was a year before becoming a grad student which is the typical requirement. Again, the skills learned were very marketable. Having a staff and responsibility over 500+ students, etc…

In parallel I got an assistantship at my university as part of my Master’s degree. This helped give approximately 14K annually and paid for 9 credits of grad school, a big deal for me back them.

Lastly I took work with a company that managed the campus telephone company. This was hourly and I was the manager, so I was able to set flexible hours and my experience in the school helped make this possible.

Oh, I got two master’s in parallel while doing all the above. This is not to brag, it is to make a point. By the time I got into the interview process with companies, I was a very serious candidate and had a lot to talk about, not just the “clubs”, “Fraternity activities”, etc. that I was a member of.

Once I finally got into my company, still same company over 12 years. I just committed myself. First in and last out. Not just to show my face though or be in the water cooler, I took every training opportunity they offered, I looked for exposure to new skills and learning. I really learned the basics from the ground up.

It was a meaningful commitment to build a strong foundation in this company. The field and the company culture were my coursework for the next 18 months. This translated into multiple promotional opportunities.

I was given a few opportunities that made all the difference in the world. First they asked me to go to one country for a few years and live, which I did, then years later I got another opportunity to be an expat in another country. For the first opportunity, I was not the best qualified for it, but I was hungry and willing to do it. So many folks refused the opportunity, they stayed behind and many of them were demoted since times in the US were tough, especially in our field, while I was promoted many times, since I was able to get more exposure and opportunity in growing environment.

I always focus on (1) having the right boss. I would not take a job just for promotion or title, I focus on the Boss. I have seen good guys get derailed by bad leadership and support. (2) Driving results, especially results in the eyes of the right boss. I believe my success has come from being able to understand the results required and being passionate about consistently delivering them regardless of the obstacles. Don’t over-commit and under-deliver. Properly commit and make it happen, beating when able…

Years later, I am still working very hard, but I believe the foundation I built during my early years set the basis for much of the core of knowledge I am using years later and the perception folks have of me…It was a great investment of time and energy.

By the way, I am not naive or big headed, I FULLY believe that LUCK played a big tole. Since my company happens to have done well over my career, had I ended up in another company I may have not had the opportunity to grow my career as well.

One final thing that jumps out that I should add, I was never shy. I would give results, but I would also share, when appropriate what results I was looking for when needed. I built good relationships with my bosses, since I invested time to be associated with the “right bosses”, so over my career I have made it clear why I should be getting an incentive or promotion, even if they did not ask first, just to ensure they were not forgetting…

I always did this linked to high performance/result times. Good to link the two, here are great results, just got your bonus boss and helped company really kick butt here, don’t forget me on bonus time or that next step we talked about before…something like that…

Lots of good stuff here that people can apply to their own careers. Here’s what I found especially useful:

Those are my thoughts from what he shared, but there are a couple other, broader issues I think his story illustrates:

I know many of you reading this are similarly successful to this man. Please share your career secrets with us all in the comments below. I know many will appreciate your wisdom.